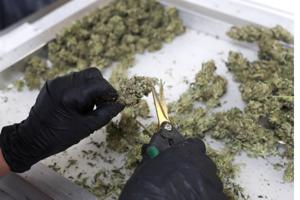 The first step to allow the operation of cannabis dispensaries in Evergreen Park was given the green light this week.

The Evergreen Park Village Board approved Monday night an amendment to the zoning code to provide for specific locations and regulations of adult use cannabis and medical use cannabis facilities.

An ordinance was also approved for a 3% tax on sales of cannabis that would go directly into village coffers.

However, Mayor Kelly Burke indicated that if any owners of these operations were given approval, they would be under strict guidelines.

The dispensaries would be located in the “C” commercial district south of 91st Street, north of 99th Street, east of Western Avenue and west of the B&O Railroad tracks.

Board members said the creation of a cannabis tax only means that the municipality has agreed to consider allowing a dispensary or dispensaries to operate in the village.

Village Attorney Vince Cainkar said that cannabis products would account for about 90 percent of the sales at a dispensary.

Percy Allen wanted to know what the other 10% would entail for dispensary sales. Cainkar said that would include pipes and other smoking materials.

Steve Duffy asked if areas that could use a boost in business near 87th and Kedzie would be considered for a dispensary. Cainkar said that area was not being considered and any dispensaries that would be approved would not be near residences.

Burke mentioned that a decision had to be made soon on the 3% tax because if it not approved this year, no dispensary could operate in the village in 2022.

“I just want to make clear that no one is actively asking us for a license,” said Trustee Mark Marzullo.

Trustee Jim McQuillan asked Cainkar if the board could set their own hours.

“Right now, the dispensary would be open to 9 p.m.,” Cainkar said. “But you could vote on and set the hours any way you want. They could only remain open until 10 p.m. at the latest.”

Cainkar added that any dispensary that would operate in the village would have space for 20 vehicles. They would also have to provide their own security. A maximum of two licenses could be granted, Cainkar said.

The facilities could not provide drive-through service. They could not have a liquor license and no gambling could take place on the premises, Cainkar added. He also pointed out no consumption of cannabis in any form would be allowed inside the facilities as well.

“They would only be selling the cannabis,” Cainkar said.

Burke mentioned that even if someone applied for a license to operate a dispensary, they would first have to endure a rigorous process through the state.

“They will have to climb through a lot of hoops,” Burke said about the application process. “If the municipality is not happy with the applicant, we can refuse it.”

The first local municipalities that were approved to sell cannabis to adults were Worth and Justice, which already were home to medical use dispensaries. The Worth Village Board approved a 3% tax in November of 2019, just before the state law went into effect Jan. 1, 2020, to sell recreational cannabis.

Justice, Chicago Ridge, Hickory Hills and Palos Hills also approved the 3% tax. Chicago Ridge is the only other local municipality that currently has a dispensary operating in the village. The Ascend dispensary opened earlier this year at 9820 S. Ridgeland Ave., which was formally Pier 1 Imports.

“You can’t even tell what it is,” said Cainkar regarding Ascend. “There are no lines outside.”

“Joan was a nurse in World War II,” Burke said. “I hope she has a wonderful birthday.”

A business license request was tabled for the Vibes Mini-Mart, 2515 W. 95th St., until the board can be provided with more information from the owner, who was not present at the meeting.

The annual Halloween Parade will be held from 6 to 7:30 p.m. Friday, Oct. 29, at 50 Acre Park, 9100 S. Rockwell Ave. The Evergreen Park Recreation Department family event is open to Evergreen Park residents up to age 11 with their parents. The event will include a costume parade, pumpkin patch, refreshments, entertainment, hayride, goodie bags and pumpkin decorating.

The Fanta SciFest will be held from 11 a.m. to 4 p.m. Saturday, Oct. 30, at the Evergreen Park Senior Center, 9547 S. Homan Ave. The event will include Dungeons & Dragons, board games, costume players and a film program.

Burke proclaimed Sunday, Oct. 31, as “Halloween in the Village of Evergreen Park” day. Trick-or-treating will be allowed from noon to 6 p.m., and will continue for children who are in the company of parents or guardians from 6 to 8 p.m. on Oct. 31.