Assisting with necessary household items during difficult times are Zelda’s Kitchen Witches, a non-profit organization spearheaded by a group of dedicated women who stocked kitchen shelves and counters in Transitional Housing apartments with small appliances, dishes, pots, pans, and everything else that one may need in the kitchen for daily use. (Supplied photos)

For years, the Crisis Center of South Suburbia has been helping women in need.

“By the time a victim of domestic violence finds the courage to leave and come to our emergency shelter, they are barely hanging on,” Sarah Tygart, Director of Victim Services at the Crisis Center for South Suburbia, said.

The local agency has been providing support services, shelter, housing, counseling, advocacy and education services for over 40 years in Chicago’s south suburbs. Including providing emergency shelter to support individuals and families on their journey to safety and independence. 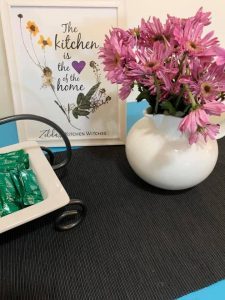 Many of the victims who live temporarily in the shelter move on to the agency’s Transitional Housing Program that provides community-based apartments and support services for up to 24 months while survivors work on securing employment or improving job skills so they can attain permanent housing.

Assisting with necessary household items during this time are Zelda’s Kitchen Witches, a non-profit organization spearheaded by a group of dedicated women who stock kitchen shelves and counters in Transitional Housing apartments with small appliances, dishes, pots, pans, and everything else that one may need in the kitchen for daily use.

“The Kitchen Witches represent a new start for so many survivors of domestic violence,” Lorri Nagle, Director of Development at the Crisis Center for South Suburbia, said. “The small gifts and notes they leave are the most impactful and remind the clients of the Crisis Center that someone is rooting for them to be courageous and leave a life of fear behind.”

The name Zelda’s Kitchen Witches derived from two parts, Zelda was a high school nickname of the organization’s founder, Janet Evans, and the kitchen witches term came from the dolls the members often given to women moving into a new home. According to an old European tradition, from Sweden and Germany, where people are given a kitchen witch that is supposed to bring good luck.

“Society moves forward when empowered people move forward,” Evans said. “The brave women we serve are moving into transitional housing and they become role models for all people seeking independence.”

The kitchen items collected to use in the Transitional Housing come from host showers throughout the year. During these showers, donations of several kitchen items are given. Over the past few years, Zelda’s Kitchen Witches have helped 35 families by stocking their kitchens. The first shower was held in 2019. Everything donated is brand new and given to the women to keep.

Aside from partnering with the Crisis Center for South Suburbia, the organization also works closely with the House2Home Project, which also provides housing and necessities to the homeless.

It has not been easy to collect donations during COVID, but the witches been able to meet every request, according to members; however, during the lockdown, a group of women held an online shower.

“Zelda’s Kitchen Witches plays a role in the crucial support system necessary for women taking the all-important step toward independence,” Evans said. “Our wonderfully loyal donors make that happen, and I am eternally grateful for that blessing.”

The women behind the magic of Zelda’s Kitchen Witches would like to emphasize that the month of October is Domestic Violence Awareness Month, and it is important to be there for those in need.

“The support Zelda’s Kitchen Witches gives to women in need starting a new life in a safe environment is so important; and being an advocate for women is something I feel strongly about,” Linda Parduhn, one of Zelda’s directors, said. “That my small contributions can help a woman start a new life means everything. Not everyone lives a white picket fence life, and we should lift up every woman in need, emotionally and financially.”

As a Palos resident and owner of Chicagoland Ham (formerly Honey Baked Hams), Zelda’s Kitchen Witches secretary, Kathy Goldin, has been involved in local charities for well over 30 years.

“Zelda’s Kitchen Witches is exactly the type of charitable organization I feel passionate about,” Goldin said. “We are helping people in need, uplifting women in perilous positions who have worked hard to establish safe, happy homes, and helping children to have a place where they can thrive and just be kids.” 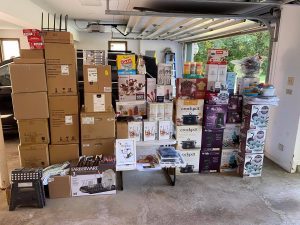 Many of the organization’s board members are former District 118 Educational Foundation members and Zelda’s Kitchen Witches is an extension of the same that philosophy — providing children safe havens where they can learn and flourish.

“A simple idea-the kitchen is the heart of the home,” Goldin said. “We provide all new kitchen items for women transitioning from situations of domestic violence. A chance for many of them to have their first kitchen, filled with new items donated with love and hope for a better future for them and their families.”