The number 13 was not lucky the second time.

For the second time in as many home games, St. Xavier University faced the 13th-ranked team in the nation in NAIA play according to the coaches polls. While they stunned 13th-ranked St. Francis, Indiana, 38-0, on Sept. 25, the 18th-ranked Cougars had their troubles Saturday with 13th-ranked Olivet Nazarene and dropped a 45-38 battle at Bruce Deaton Field.

The loss drops the Cougars to 3-2 overall and 1-1 in the Mid-States Football Association Midwest League.

The NAIA will take the league champion and a committee decides on who fills out the rest of the field.

“We wanted to win all of our games, but now it’s do-or-die,” said quarterback Stuart Ross, who threw for 282 yards and two touchdowns and ran for 39 yards and a TD. 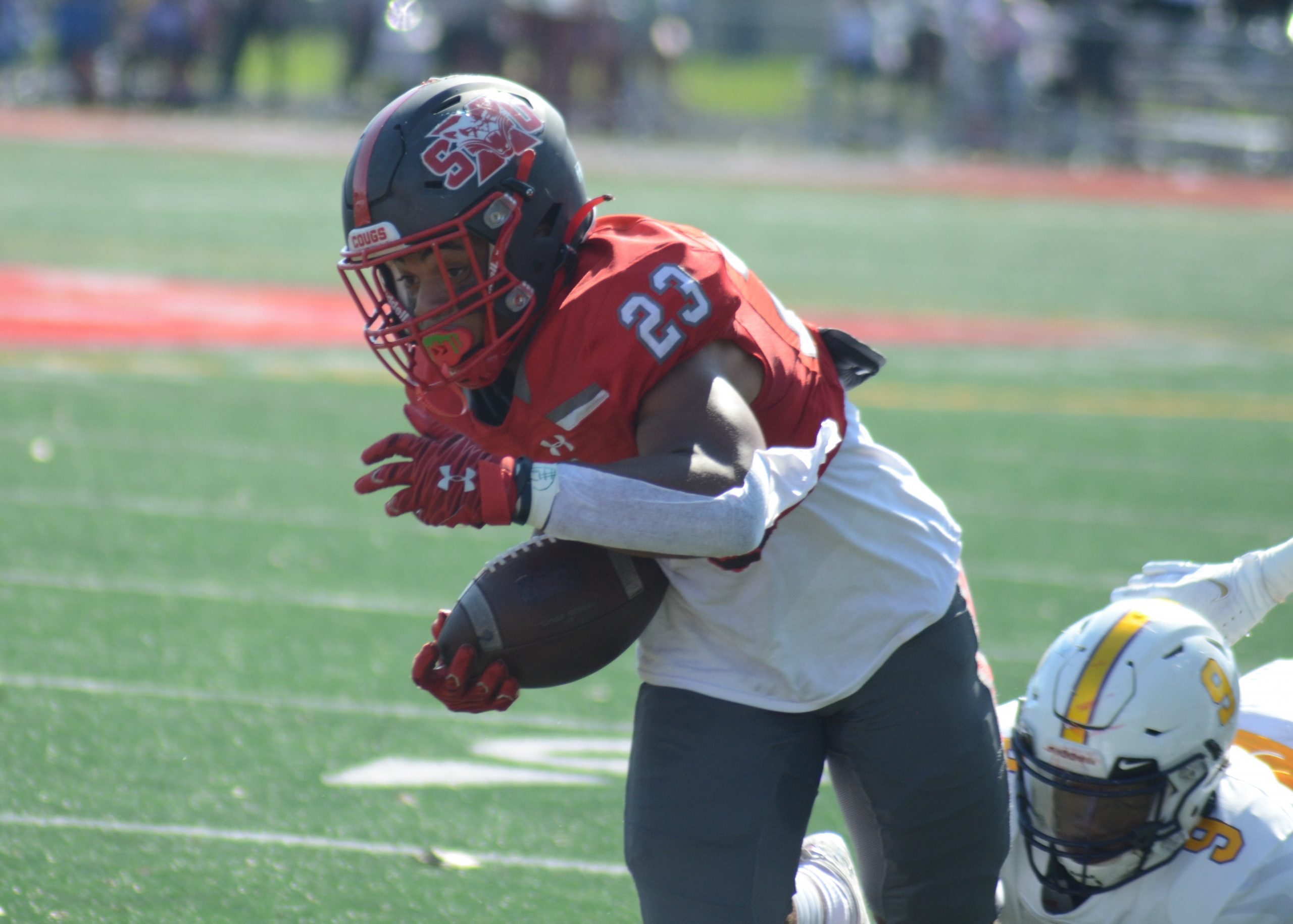 SXU running back Amari Venerable lunges forward for a touchdown reception in a 45-38 loss to Olivet Nazarene. Photo by Jeff Vorva.

The Cougars visit Missouri Baptist Saturday and host Trinity International on Oct. 23 and Judson on Oct. 30. They close the regular season at St. Ambrose and at St. Francis, Illinois.

None of those teams are currently ranked so it appears the meatiest part of SXU’s schedule is over.

Tigers quarterback David Hutton, who entered the game with 1,042 passing yards in four games, was injured late in the first quarter and left the game. Freshman backup Cameron Crouch stepped in and threw for 369 yards and four touchdowns while Jalen Dunnigan had four catches for 203 yards and three TDs.

“I would have never guessed we could give up that many points in a million years,” Feminis said. “This is the opposite of how I thought this was going to go.”

SXU outgained Oliver 490-486. Running back Amari Venerable had 98 yards on 19 carries and a touchdown and caught two passes for 13 yards and a touchdown. Justin Pringle had eight catches for 120 yards.

“Our defense has carried us all year and our offense has lagged behind,” Ross said. “It’s nice to see points put up on the board but I just wish it would have been a win.”

While the defense had eight tackles for losses for 27 yards, it only had one quarterback hurry and no fumble recoveries or interceptions.

Offensive neighborhood
Deaton Field and Tom Mitchell Field are within plain sight of each other and there was a lot of offense at both of those places in a 24-hour period.

On Friday night, Joliet Catholic Academy beat Brother Rice, 56-49 at Mitchell Field and Saturday’s 45-38 SXU game seemed like a defensive battle compared to that one.

It’s your funeral (home)
The best name of the game on Saturday belonged to Olivet Nazarene freshman Blake Lamb from Lebanon, Ohio.

Just a few blocks west of Deaton Field is the Blake-Lamb funeral home, which is well known on the South Side of Chicago and in some southern suburbs.