Brother Rice quarterback Jack Lausch has put up some impressive running and passing numbers in both wins and losses this year.

The Crusaders, who were ranked No. 1 in the state by the sportswriters in the Associated Press poll heading into Friday’s action, had a 49-46 setback to Class 8A No. 1 team Loyola in Week 4 of the season and Friday night dropped a wild 56-49 loss to Class 4A No. 1 team Joliet Catholic Academy at Tom Mitchell Field in Chicago.

In both losses, Lausch, who is headed to Notre Dame to play both football and baseball, and the Crusader offense shined.

Against JCA, he threw for 416 yards on 24-for-37 passing and three touchdowns and ran for another score. His rushing numbers (14 carries, 34 yards) were down thanks in part to losing 22 yards on second-half sacks. He hit teammate Da’Kobie Wordlaw nine times for 224 yards.

Running back Aaron Vaughn finished with 133 rushing and 42 receiving yards as the Crusaders (5-2) racked up 583 yards in the defeat.

“It’s good to know we can move the ball on other defenses,” Lausch said. “But the win is the most important thing and that’s something we’ll fix, and we’ll be ready come playoff time to win those games.”

Rice had a 14-0 lead before JCA touched the ball thanks to two touchdowns sandwiching a successful onside kick. The Hilltoppers recovered from that went went to work.

The Crusaders finished their regular season home schedule with the loss and close the season at Marian Catholic in Chicago Heights on Friday and at Marist in a huge rivalry game on Oct. 22.

Since the Illinois High School Association bases its seedings on records, the Crusaders will not be picking up a No. 1 seed but figure to still have an upper-level seed when the brackets are announced Oct. 23.

The Crusader defense will have to tighten up against elite teams.

In wins over Hillcrest, Benet Academy and De La Salle, Rice gave up just 26 points. But in a win over traditional power Mount Carmel and the losses to Loyola and JCA, they gave up 138. 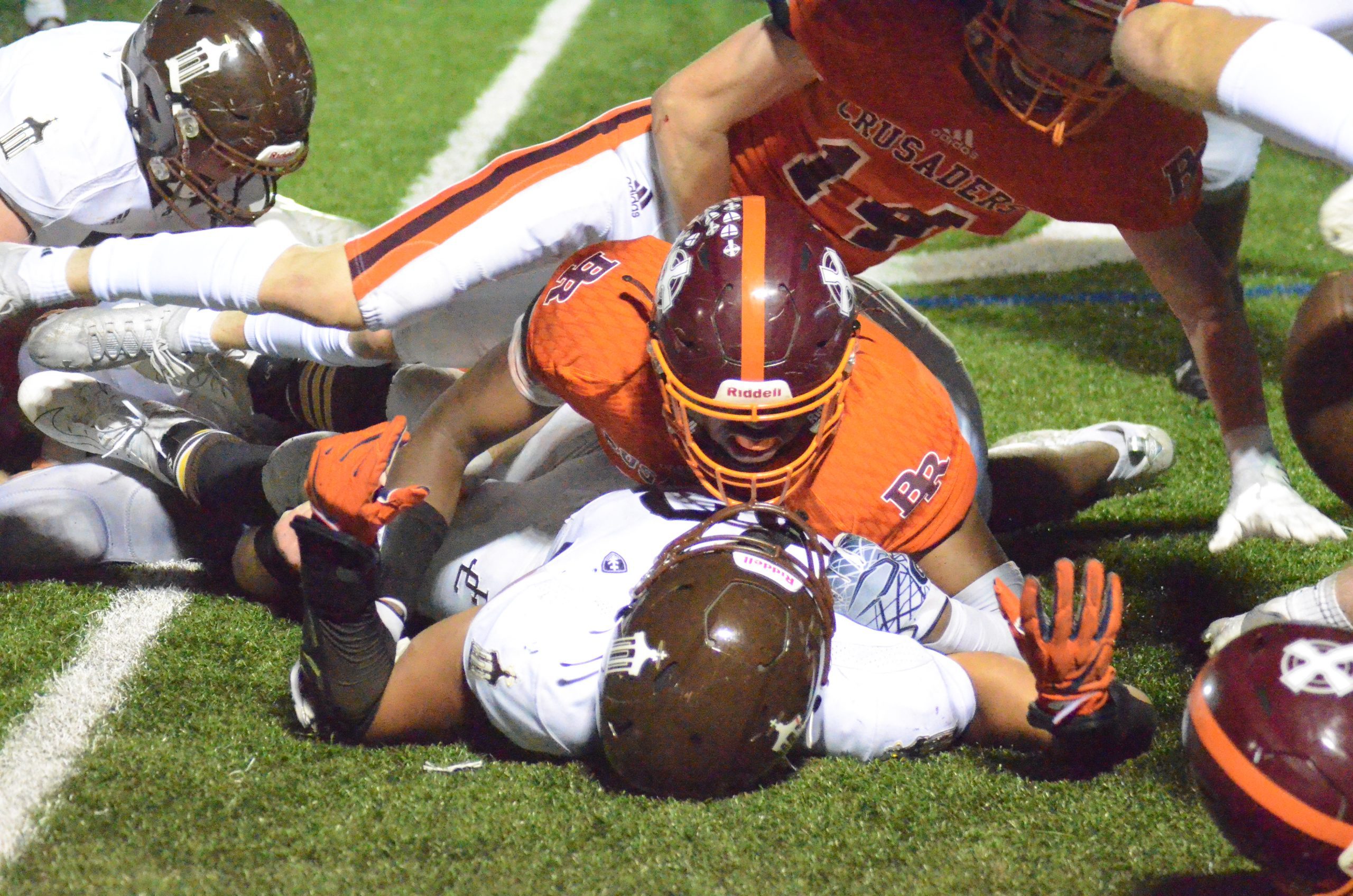 Joliet Catholic’s Jordan Anderson is covered by a Brother Rice defender after a second-half run. Anderson kept the defense busy all night with 316 yards on 30 carries. Photo by Jeff Vorva

JCA (7-0) racked up 687 yards with Illinois-bound running back Jordan Anderson piling up 316 yards on 30 carries with six touchdowns while Vinny Iannantone added 20 carries for 138.

Joliet quarterback Aidan Voss threw for 91 yards and ran for 66 more. He and Lausch were once teammates on a youth baseball team and their fathers Jonathan Voss and John Lausch played on JCA’s 1987 Class 5A championship team.

Before the game, retiring Crusaders coach Brian Badke was honored with a plaque for coaching in his final regular-season home game. 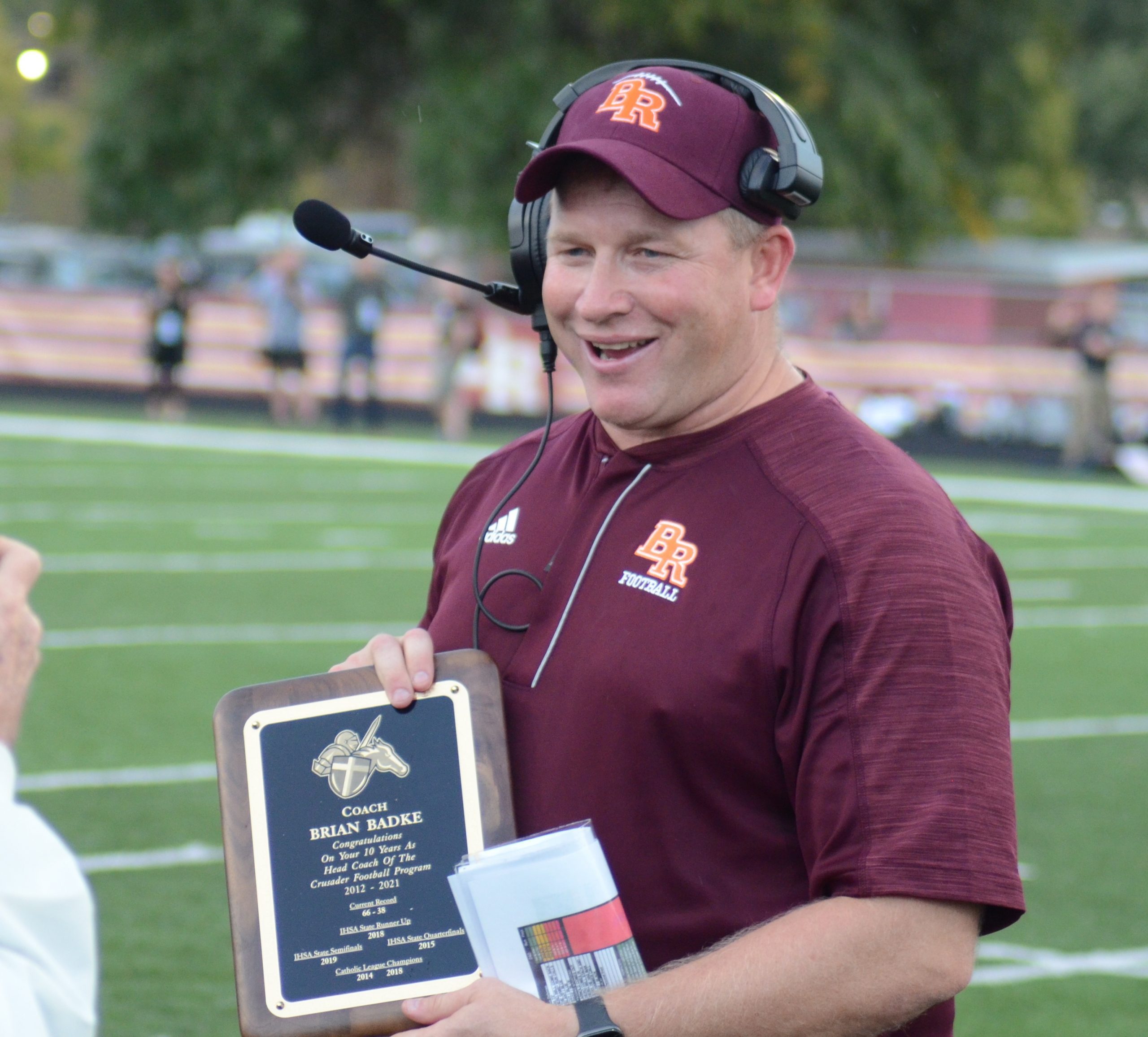