Skip to content
October 12, 2021/Comments Off on High School Football: Jake Maziarka runs for 4 TDs in Sandburg’s win over Stagg

Sandburg running back Jake Maziarka runs the ball during the Eagles’ 59-14 win over Stagg on Oct. 8. Photo by Jason Maholy

During the week heading into Sandburg’s matchup with Stagg, Eagles coach Troy McAllister’s message to his players was to not take the winless Chargers for granted.

The Eagles were coming off the program’s most significant victory since at least 2015, a 30-27 triumph over powerful Lincoln-Way East in a game they entered as a heavy underdog. One week later, they were facing a Stagg program that came into the matchup with 20 consecutive losses.

McAllister’s point of caution was reiterated, albeit not by himself, when the Chargers scored on their third offensive play to knot the score at 7-7 four minutes into the game.

But the Eagles responded in grand fashion, scoring 45 unanswered points before halftime and locking down on defense, and rolling to a 59-14 win in Palos Hills.

“This was a trap game,” McAllister said afterward. “We were Lincoln-Way East’s trap game and Stagg was ours. [A victory] means the world to us and they’ve got nothing to lose, and the mindset all week was ‘don’t take them lightly, let’s get after it.’

“Other than that first touchdown they scored, the rest of the game we took care of business.”

Sandburg (3-4, 1-2) has won two straight heading into a South Suburban Blue matchup with Homewood-Flossmoor (4-3, 1-2). The Eagles would likely earn a playoff berth with wins in their final two games.

Stagg will travel to Bradley-Bourbonnais, where they will try to break into the win column for the first time since a 36-16 victory over Little Village in Week 1 of the 2019 season.

The teams traded touchdowns on their opening drives. Sandburg senior running back Jake Maziarka ran for the first of his four touchdowns to stake the Eagles a 7-0 lead three minutes into the game. The Chargers pulled even barely more than a minute later when Lebarion Gilmore hooked up with TJ Griffin for a 48-yard score.

McAllister said the play resulted from a blown coverage and got the attention of his defense.

“Sometimes you hate having that happen, but it was a wake-up call for sure,” he said.

On Sandburg’s ensuing drive, Maziarka scored on a 10-yard run on 4th-and-3. Before the half was over he would add touchdown runs of 6 and 5 yards, with those being part of a 35-point second-quarter outburst that initiated a running clock at the start of the second half. 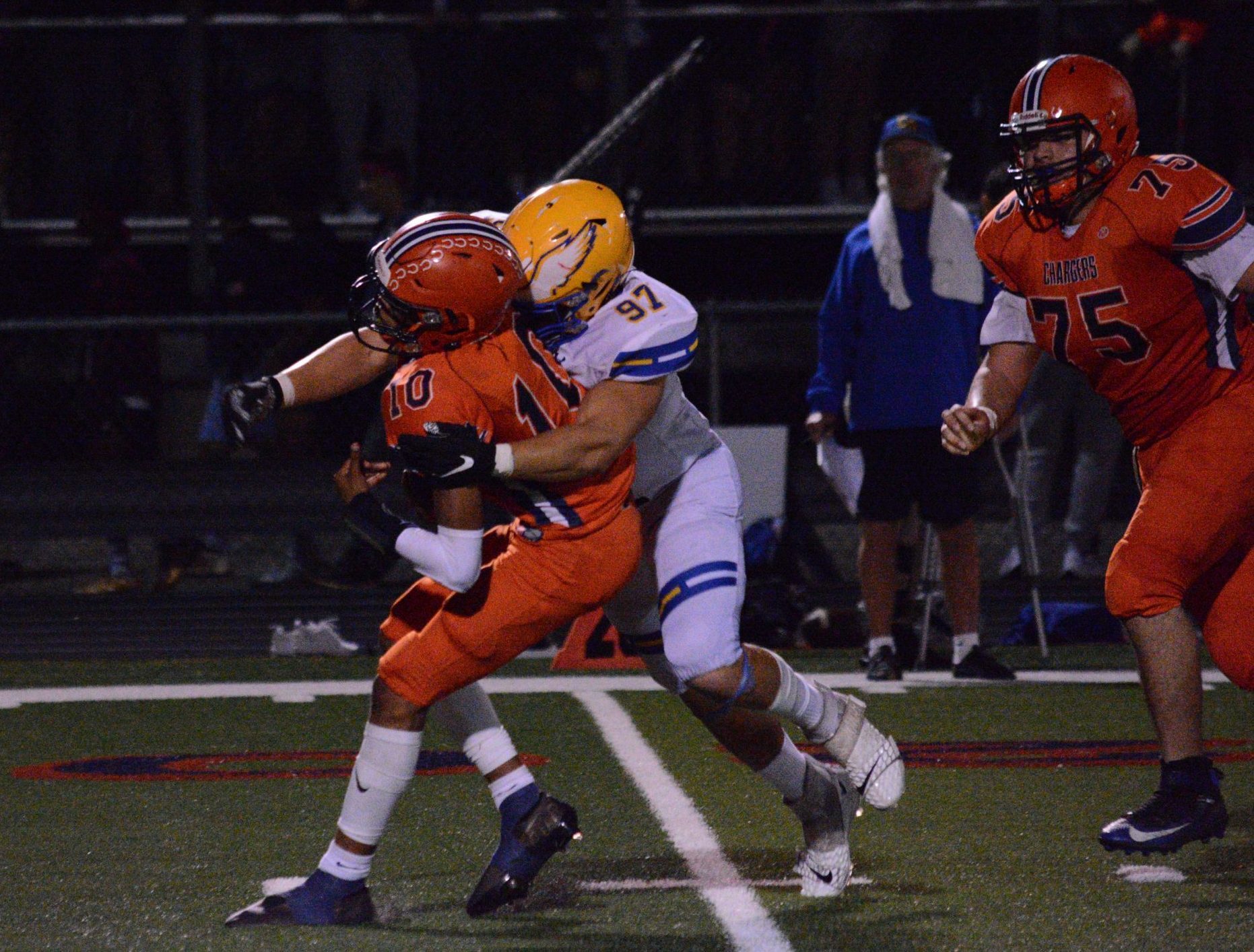 Maziarka finished with 12 carries for 100 yards, and consistently broke tackles to gain yards after contact. After playing wide receiver his junior season, his skill set opened eyes in summer camp, prompting McAllister to move him to running back, filling a position of need for the Eagles.

“He’s a fast, agile player, but when he see something in front of him he tries to run it over,” McAllister said of Maziarka. “He’s become a very versatile back for us, which is what we needed from him his senior year.

“The first couple weeks of camp we were trying to figure things out, and we thought he was pretty good when he runs with the ball, and he has a big frame and he’s nice-sized kid with some good speed. It was pretty straight-forward what to do with him.”

The Eagles’ big second quarter was punctuated by a 36-yard touchdown run by Christian Evans. The junior quarterback took the snap with 6 seconds remaining on the game clock, ran up the middle, then cut left across the grain and toward a field of green along the sideline as he turned up-field. No Stagg defender was within five yards of him until he got to the end zone, with zeros on the clock.

McAllister said the plan had been to kick a field goal.

“[Evans] was going to run 5 yards and take a knee, but he just saw it open on that side of field,” McAllister said. “He said, ‘Coach, I had to go [for the touchdown].’”

Evans completed 12-of-17 passes for 141 yards and tossed a 23-yard touchdown pass to senior wide receiver Jake Wantroba. He added seven rushes for 75 yards and a score.

For the Sandburg defense, junior linebacker John Thompson returned an interception 16 yards for a touchdown. The Eagles recorded four sacks, two by senior defensive lineman Nathan Gibbons and one each by Alex Szczeniak and Jaylen Wright. Joe Shelton forced a fumble that was recovered by Dylan Schick.

For Stagg, junior running back Aiden Taylor had a 6-yard touchdown run. 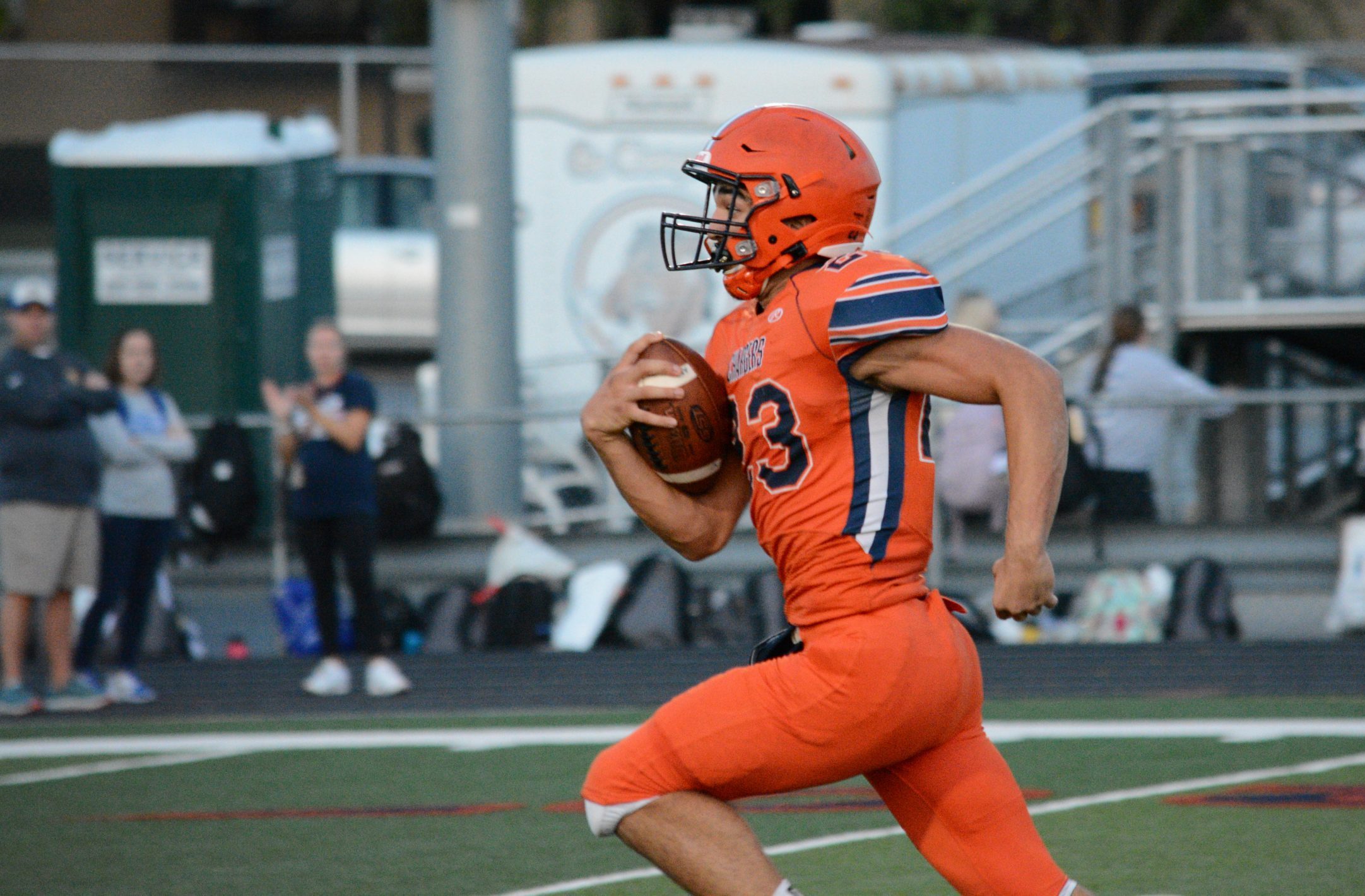 Stagg senior wide receiver TJ Griffin sprints toward the end zone for a touchdown during the Chargers’ loss to Sandburg on Oct. 8. Photo by Jason Maholy