Skip to content
October 14, 2021/Comments Off on Making 63rd and Spaulding vibrant

As I mentioned last time, we met here, Jeanette opened her business at the corner of 63rd and Spaulding last winter when we were still in the deep throes of the pandemic restrictions, so she never had an official celebration. She just jumped into the business of building up her reputation and shaping her vision for the future.

Her primary focus, of course, was to help people with their insurance and financial needs. Her shingle in the front window tells us she has a Farmers Agency.

But, as you know from reading updates here, she has not stopped there; but rather remodeled her extra room into the Monarca Event Room, which she allows community folks to rent out on weekends for parties like baby showers, graduations or for classes. She offers it to non-profits at no charge during the week. She has also been holding vendor events once a month to showcase small businesses. 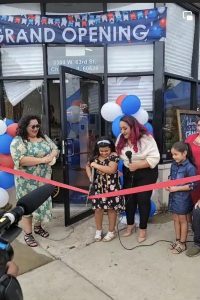 In doing that, she has embraced the community and included dozens of vendors in her dream.

At Saturday’s event there was food, music and 24 vendors. As she and her daughter, Ruby, cut the ceremonial ribbon, Jeanette thanked God, her family, friends and vendors for “helping to make this not just an office, but a lively place.” As she popped the cork on a bottle of champagne, the music played the well-known Celebration by Kool & The Gang. How appropriate was that?

For Hispanic Heritage Month, which runs from Sept. 15 through Oct. 15, the Greater Southwest Development Corporation highlighted Jeanette in a short video which I placed on the Chicago Lawn Historical Society Facebook page. Check it out and meet Jeanette.

The month of October also celebrates teachers with an annual National Teachers’ Day at the beginning of the month. Marquette Bank is taking this a little further and celebrating teachers with an Adopt-A-Classroom prize drawing. Nominate a local teacher/school and they could win a $200 Marquette Bank Gift Card to use for their classroom. Nominations can be made at the flagship location on 63rd and Western or any of the branches, or online at bit.ly/3iwweBU. The contest runs all month, closing on Oct. 29.

Congratulations are in order for the 43 seniors inducted into the National Honor Society at St. Rita High School last week.

Bon voyage to Margarita, who has been visiting her nephew, Al, here on Francisco for the summer. Al lives next door to me, so I have seen Margarita almost every day. The frequent flier is now on her way to Puerto Rico for a visit. We’ll see you next spring, Margarita!

Any of us that frequent the Sisters of St. Casimir Bingo and Games Parties will no doubt recognize the name Eleanor Ebert. Sadly, Eleanor passed away recently. Eleanor served as the president of the SSC Auxiliary for many years and has been responsible for putting together so many raffles and fun events for the Sisters’ benefit. She will certainly be missed.

Tuesday, Oct. 19 is Family Craft Day at the Chicago Lawn Branch Library, 6120 S. Kedzie, from 5 to 6 p.m. Join Mrs. Susie in creating Halloween luminaries. This program takes place in person and through Zoom. Materials are available at the library. For more information, contact Mrs. Susie at (312) 747-0639.

Last time, we talked about singer Nick Noble and his connection to the neighborhood. Keeping in line with celebrity connections, I wondered if anyone remembered Illinois Billiard Club. Several of you did. I was happy to hear that some of you remembered reading about it in my Chicago Lawn/Marquette Manor book. Here’s a bit of the story:

The IBC was the brainchild of Jim Parker. Jim was born at Holy Cross Hospital and grew up at 64th and Francisco, attending St. Rita Grammar School and High School. He went on a blind date with a girl named Bonnie, who soon became his wife. They bought a four-flat on 64th and Artesian. It was during this era that Jim’s favorite place to play billiards, The Beverly Bowl at 94th and Ashland, was closing. Jim remodeled one of his basements (no small feat, as it required moving a structural support column), bought an antique billiard table and IBC began.

By the time Jim had purchased the building at 2435 W. 71st St. in the early 1980s for the IBC, he had also purchased and refurbished all of the pool and Carom billiard tables from The Beverly Bowl.

Hollywood came to IBC, launching a marketing campaign promoting the movie Baltimore Bullet, and a national live tournament was held at the club. Director Martin Scorsese followed, bringing Paul Newman and Tom Cruise to IBC to learn the sport and film The Color of Money. The club was named number one out of 150 “Best of the Best” by Chicago Magazine in the commemorative issue of the city’s 150th anniversary. Pretty cool? Have I mentioned what a really nice guy Jim is?

For next week, do you remember the restaurant off the alley just south of 63rd and Kedzie?