October 18, 2021/Comments Off on Making their move

A Cook County Jail Chess Team member ponders his next move again an opponent in a facility on the other side of the world. --Photo courtesy of the Cook County Sheriff’s Office

The Cook County Jail’s Chess Team finished in third place in its division during the championship round of the largest international chess competition for detained individuals, Sheriff Thomas J. Dart announced last week.

Hosted by Cook County Jail and sanctioned by the International Chess Federation (FIDE), the Intercontinental Online Chess Championship for Prisoners featured 41 teams from jails and prisons in 30 countries. 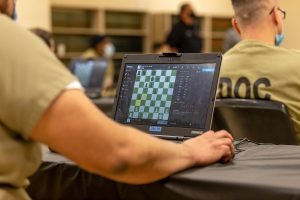 A Cook County Jail Chess Team member ponders his next move again an opponent in a facility on the other side of the world. –Photo courtesy of the Cook County Sheriff’s Office

The Cook County Jail team finished second in group play in the first day of the competition on Oct. 13 and was one of 12 teams to advance to the Oct. 14 championship round.

In championship action, teams were divided into two groups of six teams. Cook County finished in third place in its division, which was won by a team from Zimbabwe.

Mongolia was the winner of the other division, and during a match early Friday morning, Mongolia defeated Zimbabwe to become the overall winner.

“I’ve always been a fan of chess, and I know how much time and effort it takes to play at the level our team exhibited this week,” Dart said. “Our team should be incredibly proud of their accomplishment, and for the strong foundation they have built for future international competitions.”

This was the sixth international competition that the Cook County Jail team has participated in since the chess program was launched in 2012. Since then, the program has hosted numerous chess dignitaries over the years, including chess grandmaster Anatoly Karpov.

In March 2020, the Cook County Sheriff’s Office signed an agreement with FIDE – the governing body of international chess competition – formalizing the organization’s logistical support of future international online matches through their Social Service Commission. In turn, Cook County Jail will serve as the hub for FIDE-led International Chess for Freedom events.

Since its inception, approximately 1,200 individuals have participated in the chess program while in custody at the Jail. Program participants practice weekly, and the eight players who represented Cook County Jail in this tournament were chosen based on skill.

“It is gratifying to see a program that started at Cook County Jail expand to include literally dozens of countries and hundreds of players from all around the world, and we are thankful for the partnership we have with FIDE,” Dart said. “Programs like this are so important because studies show they can make jails and prisons safer places overall. This competition not only serves that goal, but also enables people from all over the world to share an experience they enjoy.”

(Editor’s note: earlier this year, the Greater Southwest News-Herald published an original report on the Cook County team. It is posted at southwestregionalpublishing.com.)