GOAL CELEBRATION – Chicago’s Kealia Watt jumps into the arms of Tierna Davidson after scoring the lone goal in a 1-0 victory over Orlando on Oct. 13. Photo by Jeff Vorva

The Chicago Red Stars played their final regular-season game at SeatGeek Stadium on Saturday night with a 2-1 victory over Kansas City in a National Women’s Soccer League game.

Is there a chance they will be back in Bridgeview for a postseason match?

Even though the top four teams in the league host playoff games, and the Red Stars opened this week in fourth, it’s no slam dunk they will host. They are likely in the six-team playoffs but the next few weeks, teams will jostle for playoff seedings.

Portland and the OL Reign are guaranteed to host their first season postseason games. Five teams, including the Red Stars (10-8-5, 35 points) are vying for the other two spots.

The Red Stars close the season visiting Orlando (7-9-7) Oct. 29 at Exploria Stadium. A win gives them 38 points but the team to worry about is NJ/NY Gotham, who has 32 points but also has three games left on the schedule for nine potential points.

Washington (36 points) is in the third spot and has a solid chance to host.

Houston and the North Carolina Courage (32 points for both teams) each have one game left and are hoping the Red Stars and Gotham falter.

After the Stars beat Orlando on an own-goal and a Makenzy Doniak score, coach Rory Dames is glad for a break to recover from a three-games-in-seven-days stretch and to get some players healthy.

“We’re playing for home field and we were 8-2-2 at home,” he said. “We certainly would love to get a home game in the playoffs.”

Home team wins!
Speaking of home, earlier in the week, the Red Stars scored an early goal and hung on for a home 1-0 victory over Orlando to end an unusual streak.

In the previous seven matches, the visiting team won until Oct. 13 when Kealia Watt scored in the sixth minute for the Red Stars while Cassie Miller racked up the shutout.

This game was a makeup of the match originally scheduled for Oct. 2 but was postponed because of league incidents involving sexual misconduct. The Red Stars were hoping to draw its best crowd in two years but ended up drawing an announced crowd of 3,198. 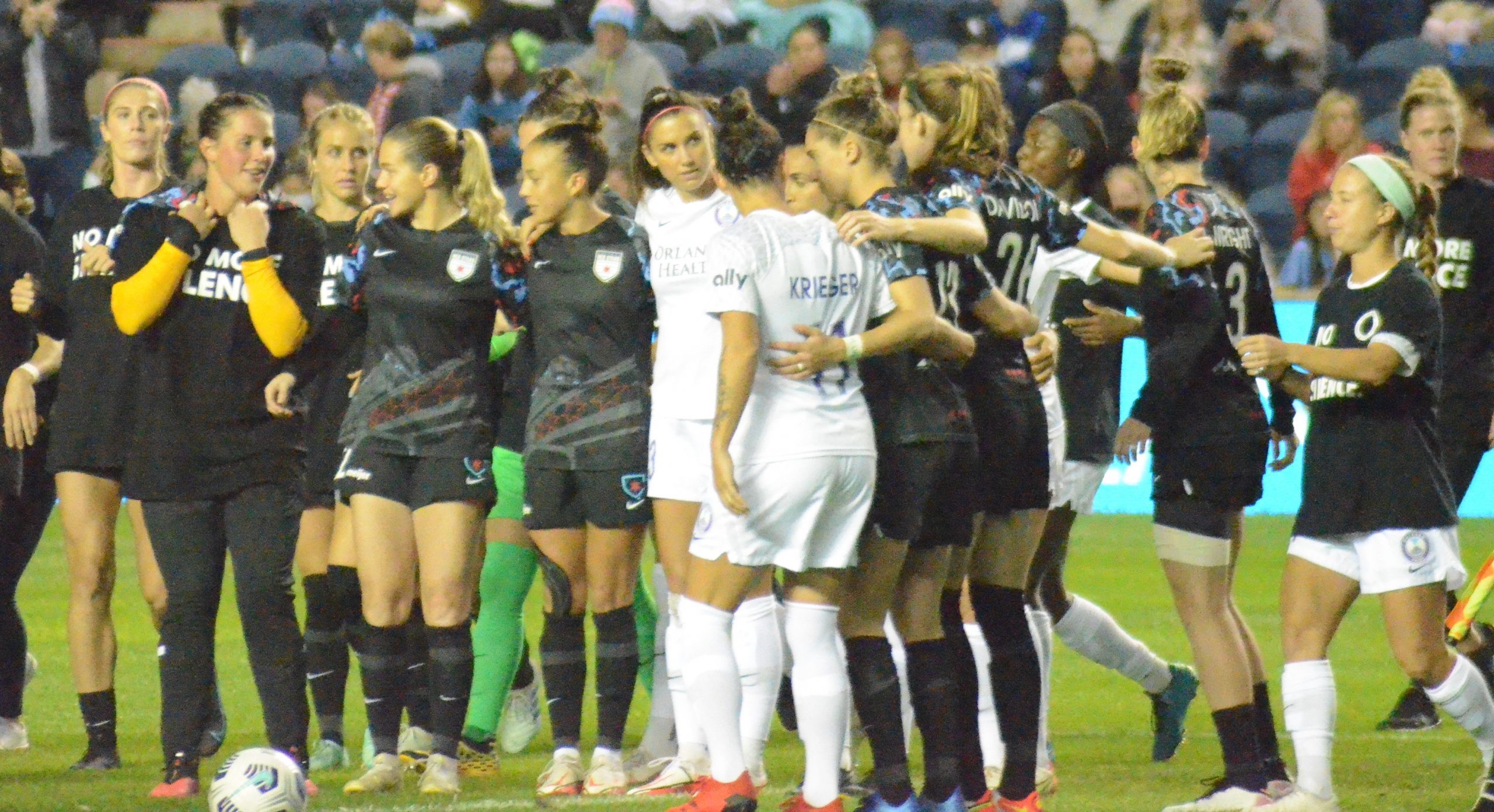 Members of the Red Stars and Orlando gather to show solidarity after an NWSL season that has included sexual misconduct allegations against coaches in the league. Photo by Jeff Vorva

Stars’ stars play for USA
The Red Stars will be without Tierna Davidson, Casey Krueger and Mallory Pugh, who will be joining the United States Women’s National Team for matches against Korea.

House Keeping
The Chicago House’s two-game winning streak was snapped Saturday with a 2-1 road loss against the Maryland Bobcats.

The House (3-6-2) was scheduled to host Chattanooga at SeatGeek Stadium on Wednesday and host Maryland in a rematch on Saturday.

HOPING FOR HOME
Portland and the OL Reign clinched a chance to host NWSL playoff games. Five teams are trying for the other two host spots, including the Chicago Red Stars. 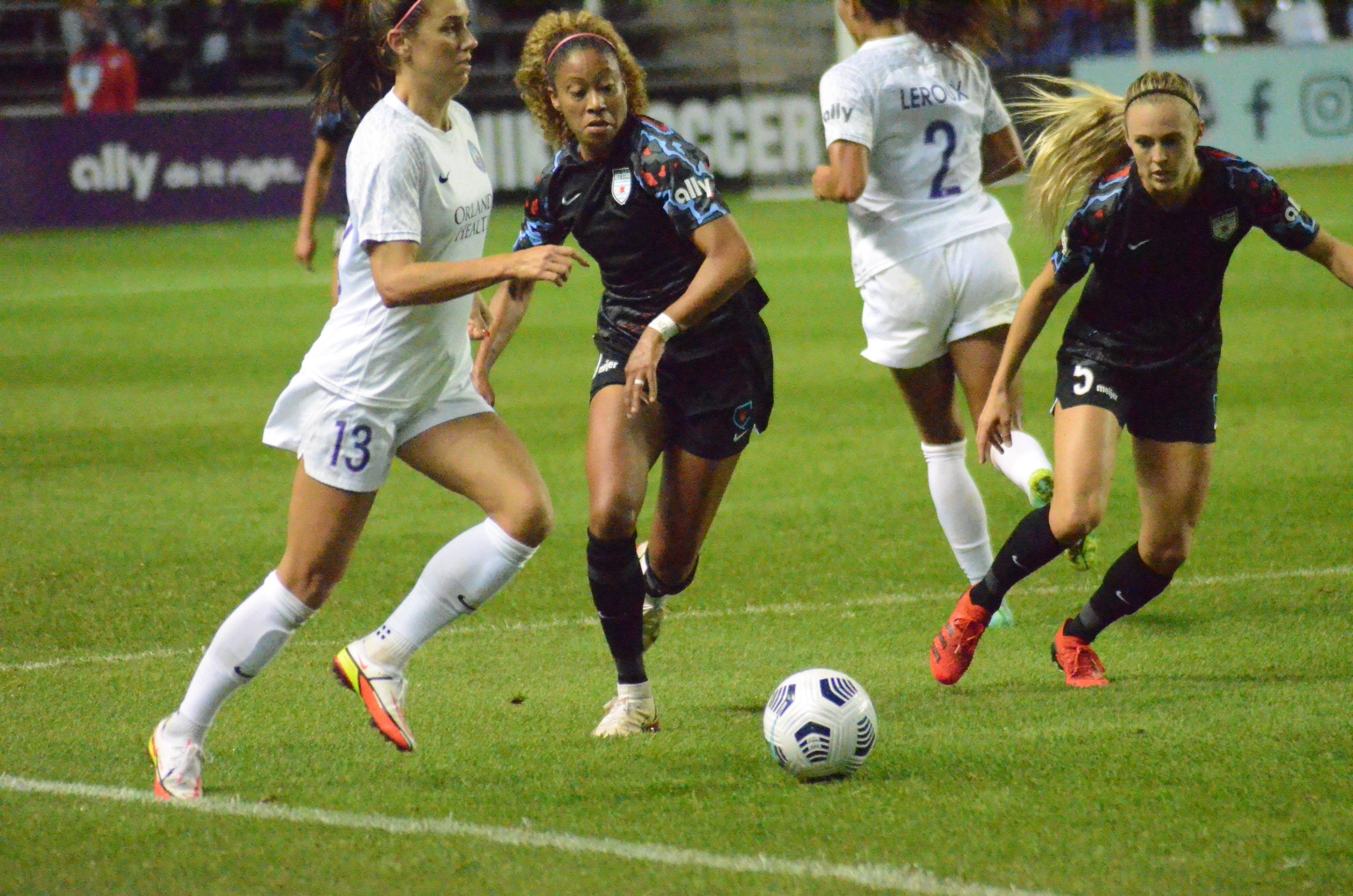 Chicago’s Casey Krueger (left) and Rachel Hill have their eyes on the ball in a victory over Orlando on Oct. 13. The two teams face each other again Oct. 29 in the regular-season finale. Photo by Jeff Vorva