Through one half, a pivotal Week 8 matchup between Oak Lawn and Argo had the appearance of one that might be tight until the very end.

The Spartans had a different idea, opening up a commanding lead by the end of three quarters and putting the game away with a flurry of fourth-quarter touchdowns in a 54-12 final on Oct. 15 in Summit.

Oak Lawn coach Ryan Pattison said his team had a great week of practice leading up to the game, and that his players executed the game plan almost to perfection.

“Offense, defense, special teams — I thought it was our most complete game of the year,” Pattison said, noting special teams was a point of emphasis during the week. “This is great: Week 8 going into Week 9, we can make the playoffs with one more win. And to have a win like this and feed into Week 9 … I’m really happy for the guys.”

Both teams entered the game with their playoff dreams still alive and knowing that a loss would all but eliminate them from postseason contention.

Oak Lawn (4-4, 2-2 South Suburban Red) is now one win away from being eligible for the playoffs, per the IHSA’s five-victory standard, heading into the regular-season finale at home against Evergreen Park (5-3, 3-2). The Spartans have not played in the postseason since 2009, the final year of a run under Art Panka and Ron Thornburgh that saw them in the playoffs six of seven seasons.

Argo (3-3, 1-3 SSC Red) will try to close out the fall with a win over Shepard this Friday in Summit. A fourth win would match the program’s best win total over the past seven full seasons (2014 and 2018). 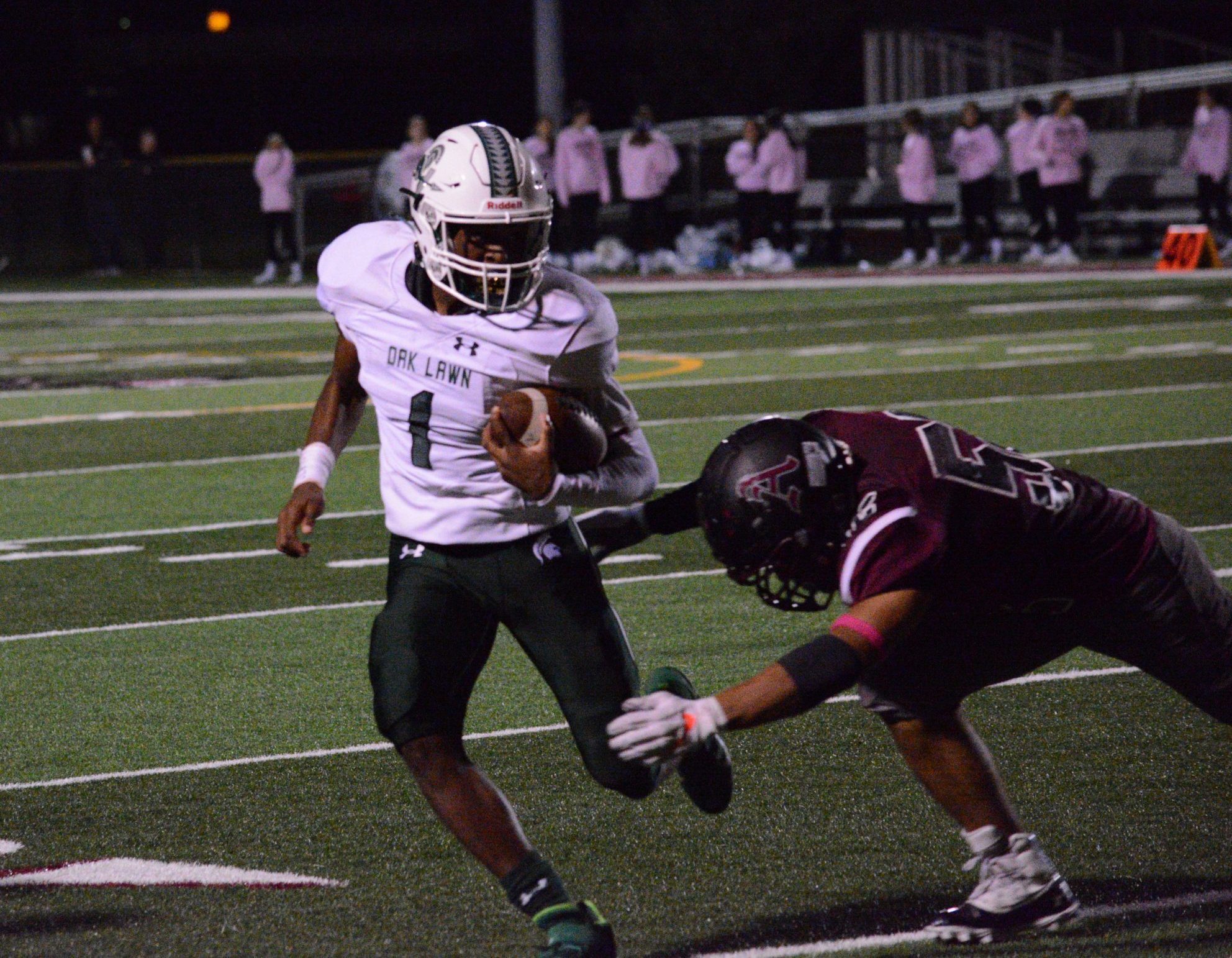 Oak Lawn running back Gavin Butler tries to elude an Argo would-be tackler during the Spartan’ win on Oct. 15. Photo by Jason Maholy

The Argonauts have not qualified for the playoffs since 2013, when they went 7-2 in the regular season and advanced to the Class 6A second round before losing to SSC Red rival Richards.

Oak Lawn broke the game open with 13 points in the third quarter, then exploded for 27 more in the fourth to turn what was a 14-6 halftime lead for the Spartans into a rout.

Pattison said scoring on the opening drive of the second half and answering Argo’s last-second touchdown before halftime was a crucial component to the Spartans’ effort.

“We grabbed the momentum back, and that was great to see them respond like that,” he said of his players.

Senior running back Gavin Butler extended the lead to 21-7 with a 3-yard touchdown run 5:16 into the third quarter. Four minutes later, junior wide receiver Eduardo Chiquito hauled in a pass from Gabe Duer and ran the final 50 yards to paydirt on an 85-yard scoring play.

The Duer-to-Chiquito connection came two plays after Argo failed to convert on fourth down deep in Spartans’ territory.

Argonauts junior wide receiver Davonte Evans scored on a 1-yard touchdown pass on a flea-flicker as time expired in the first half. Senior quarterback Deiontae McDonald scored on a 58-yard run in the fourth quarter.

The Spartans rolled up 396 yards of offense, 248 of that on the ground. Nicco Reyes led all rushers with 98 yards on 17 carries and he scored one of four Oak Lawn rushing touchdowns. Gavin Butler, Ayham Salah and TJ Vrabel had the others.

Duer, a senior quarterback and linebacker, ran for 61 yards and completed 2-of-5 passes for 96 yards, with both throws going to Chiquito and the majority of the yards coming on their long scoring play. Junior Ayham Salah completed both his attempts for 52 yards and the touchdown to Lawrence.

Oak Lawn also scored two defensive touchdowns, a pick-6 by Vrabel, a sophomore, and a scoop-and-score by senior Ryan Conrad. Jeremy Williams had an interception and Evan Zambrano recovered a fumble.

Pattison knows the Spartans are in for a battle against Evergreen Park, which has five wins but will be gunning for a sixth to ensure it earns a playoff berth. But he would never doubt his guys stepping up and getting the program’s biggest win in 12 years.

“They just want to win football games, and they think they’re going to win every single football game,” he said. “They show up on Friday night ready to play and they’re legit. They think they’re going to win and they come out and play that way. They don’t always get the job on the scoreboard, but they compete their butts off game in and game out.”