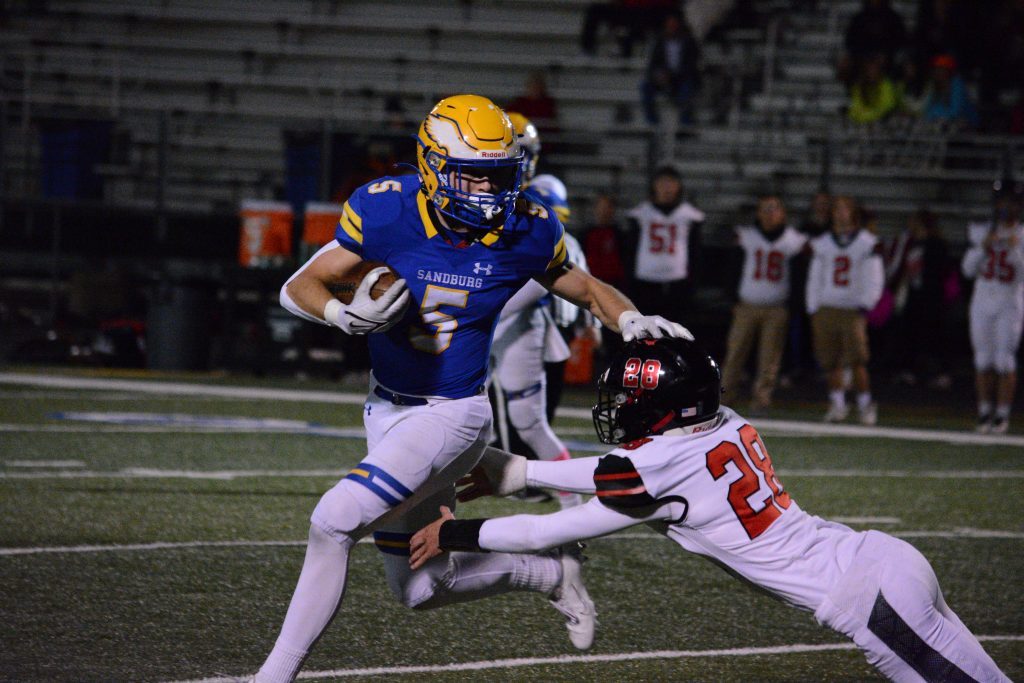 Sandburg running back Jake Maziarka ran for 179 yards and totaled four touchdowns in a 59-17 win over Lincoln-Way Central in Week 9. Photo by Jason Maholy

Sandburg to dance with Devils in first playoff game since 2015

Entering the final game of the regular season, Sandburg may have figured its most difficult work toward completing what once appeared to be an improbable run to the playoffs was finished.

After starting the season 1-4, the Eagles needed a win in Week 9 over struggling Lincoln-Way Central to secure a spot in the Class 8A playoffs. Sandburg had already ripped off four consecutive wins that included triumphs over Lincoln-Way East and Homewood-Flossmoor, two nemesis that had beaten them a combined 23 straight meetings.

The Knights, meanwhile, had been blown out in each of their previous four games by an average of 27 points.

That’s why they play the game.

The Eagles fumbled on the first offensive play and Central on the next snap scored on a 67-yard touchdown pass. But any doubt that sequence of events may have contributed to on the Sandburg sideline wasn’t evident, and they would recoup an ultimately prevail, 59-17, in front of a home crows that saw them clinch their first postseason berth in five seasons.

The Eagles have a first-round date with Hinsdale Central (8-1) at 2 p.m. Saturday in the opening round of the Class 8A playoffs.

“It’s exciting being able to have control of your own destiny,” said senior running back Jake Maziarka. “We came into the season rough starting 1-4 and we turned it around. It just feels really good to be able to make the playoffs.”

Maziarka scored four first-half touchdowns on runs of 12, 14 and 80 yards, and a 34-yard reception from junior quarterback Christian Evans. He ran 13 times for 179 yards as part of a 326-yard rushing effort by the Eagles.

The postseason appeared to be just a dream for Sandburg (5-4) after a 42-0 loss to Lockport in Week 5 and reigning Class 8A champion Lincoln-Way East in the docket the following Friday. The Eagles upset the Griffins, beating their SouthWest Suburban Blue foes for the first time in 14 meetings.

“We just said after that Lockport game that the season’s in our own hands,” Maziarka said. “Our goal at the beginning was to make the playoffs and we said, ‘this is it, every game’s do-or-die.’ I think everyone turned it up a gear and up and we finally started producing and making plays. It feels good.” 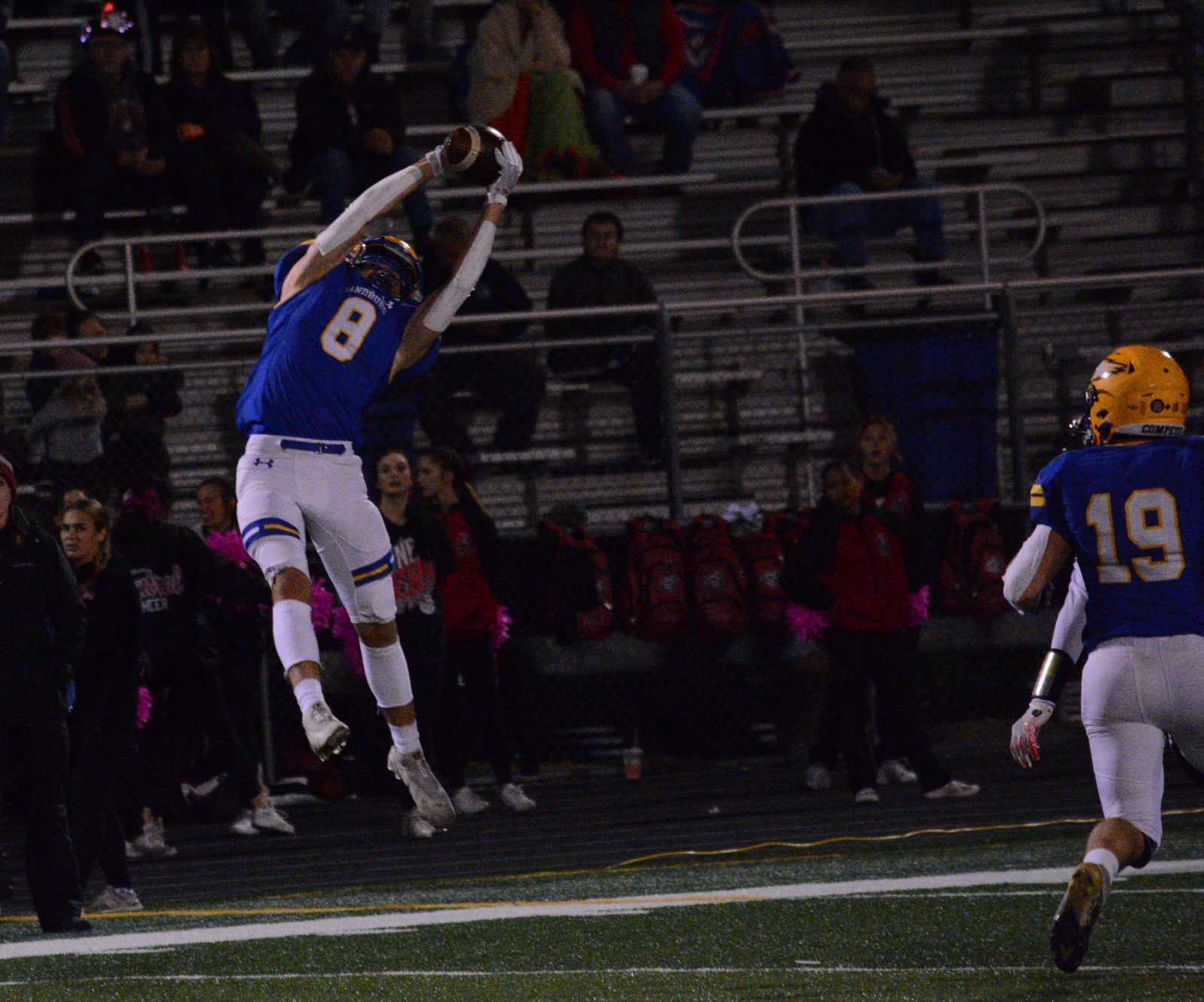 Sandburg junior defensive back Harrison Meyer leaps to make an interception during the win over Lincoln-Way Central. Photo by Jason Maholy

The development of Evans has been a major part of the turnaround. He completed 16-of-21 passes for 248 yards and three scores against Central. Among those touchdowns was a 21-yard, perfectly placed strike to senior wide receiver Jackson Schramm, who made an athletic, leaping catch in the end zone.

“For this team to make the playoffs, it’s really huge,” Evans said. “This is something we worked for all year and we feel like we deserve.

“We’ve just got to keep playing how we play, practicing hard all week, keep the grind going.”

Evans has made strides as the season went on, with the Eagles improving as their quarterback gained command of the offense. Sandburg averaged 6.4 points per game through the first five weeks and was shut out twice in those games. That number was boosted to 44 points per game during the four-game winning streak that closed the regular season.

“I thank Coach McAllister a lot for that,” Evans said. “He’s really helped me progress as not just a quarterback but a football player, and he’s helped everybody on this team become great men. And as far as me personally, being able to process the game, knowing where I’m going with the ball, what to do and being able to lead this team, I feel like he’s been a huge part of that.”

McAllister said Evans has progressed by leaps and bounds over the past five weeks.

“He’s understanding what he’s seeing on every play and starring to make great decisions,” he added. “You saw tonight, he had great numbers. He played a really calculated game and he did great job for us.”

Along with the emergence of Evans and Maziarka has been the improved play of the offensive line, which was wracked by injuries and inconsistencies early in the season. The starting unit consists of senior Wesam Alzoubi, sophomore Zach Barrett, and juniors Jayson Walls, Eric Mitchell and Ryan Johnson.

“That’s the group that has stepped up and really pushed us forward,” McAllister said.

“With the way the O-line playing the way it is, and giving him time to make throws and make reads. And the way Maz is running the ball, that helps a lot, too.” 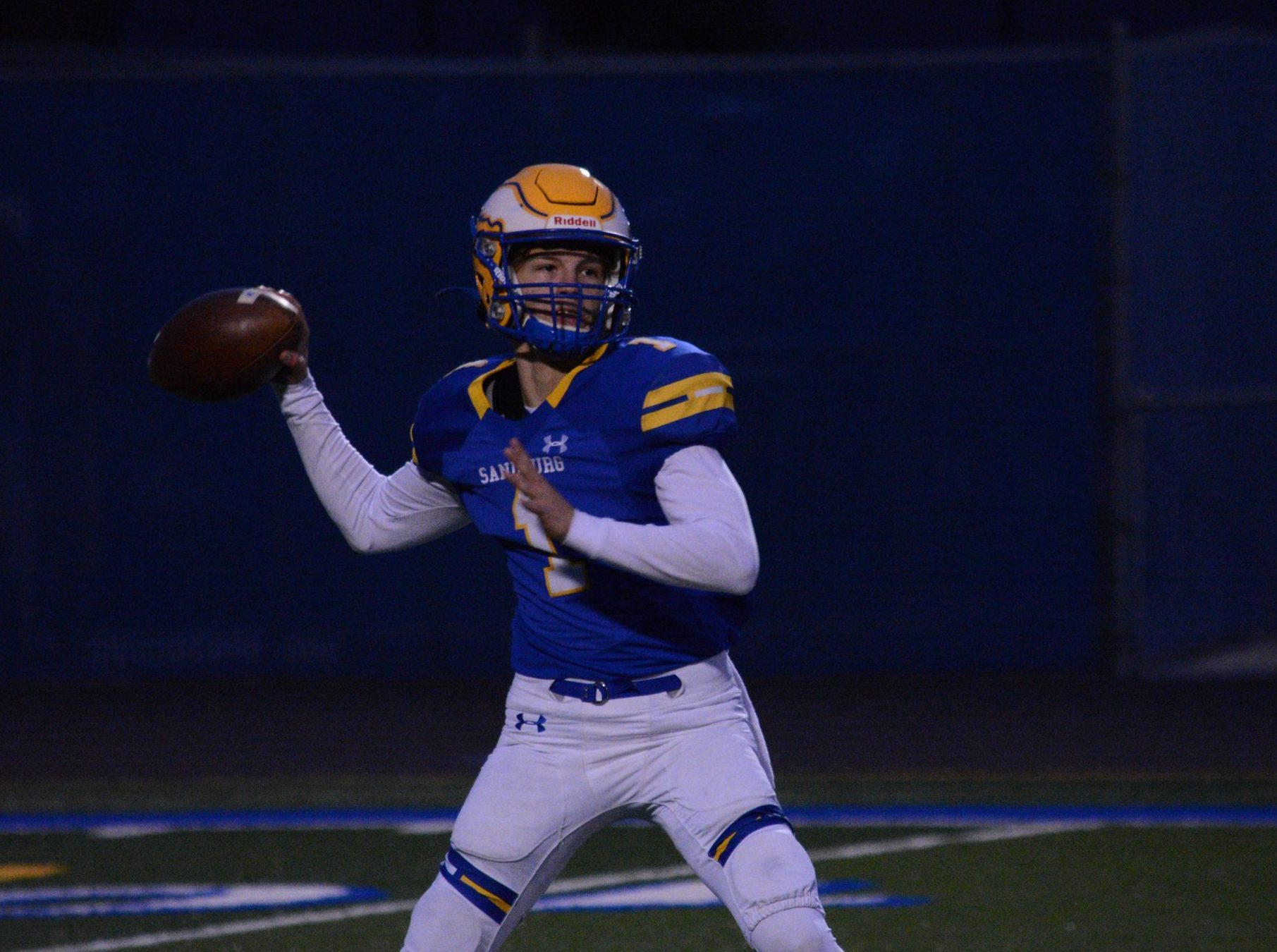 Sandburg junior quarterback Christian Evans threw for 248 yards and three touchdowns while completing 76 percent of his passes in a 59-17 win over Lincoln-Way Central. Photo by Jason Maholy

Date with the Devils
The Eagles will try to keep the good times rolling in the playoffs, but will have their work cut out for them against a traditionally strong program having an excellent season. The Red Devils come in on an eight-game winning streak. They are averaging 32.9 points per game and allowing only 10.2, and have shut out four opponents.

The cumulative record of Hinsdale Central’s nine regular season opponents is only 40-41. Sandburg’s opponents have gone 46-35.

The Red Devils have made the playoffs in 10 consecutive seasons and 19 of the past 21.