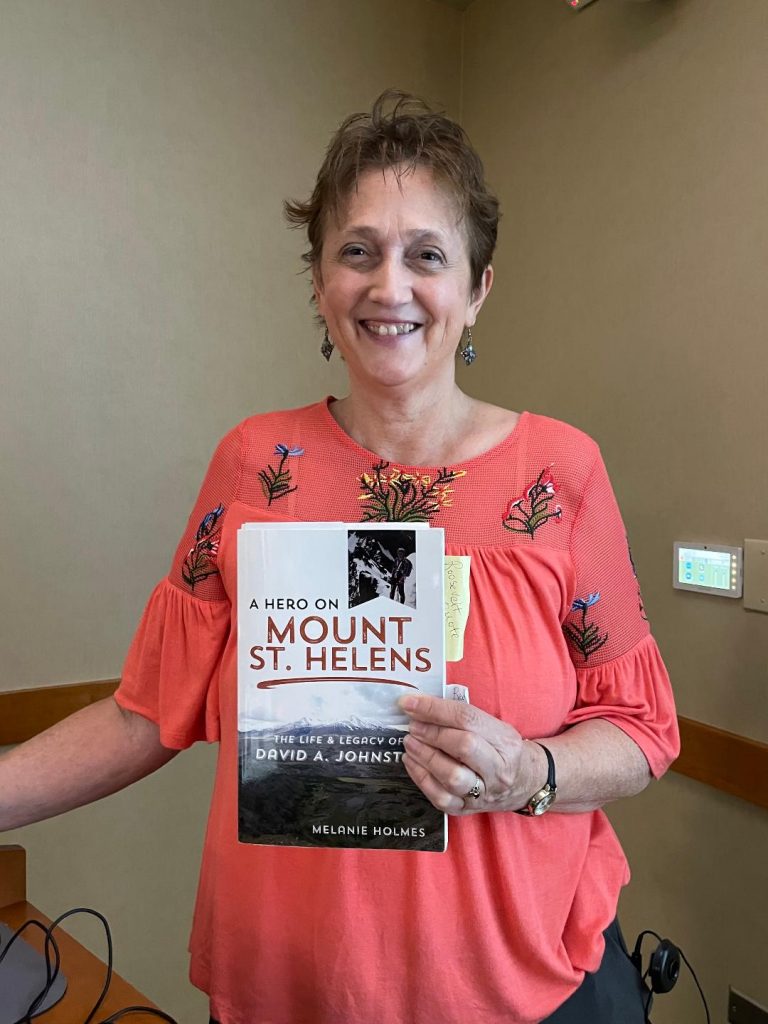 Author Melanie Holmes spoke at the library about her book, "A Hero on Mount St. Helens: The Life and Legacy of David A. Johnston." (Photos by Kelly White)

A local author shared the story of a hero’s tragic fate at the Evergreen Park Public Library.

Melanie Holmes spoke at the library, 9400 S. Troy Ave, Evergreen Park, on September 29 about her book, “A Hero on Mount St. Helens: The Life and Legacy of David A. Johnston.”

“Everyone knows how he died; no one knew how he lived,” Holmes, of Palos Park, said. “His story reminds us to pause and reflect, because there’s heroes among us and there was a hero there.”

Holmes, an author, reporter, public speaker and historian, with a business degree from Saint Xavier University has a close-knit friendship with David Johnston’s only sibling, Pat Ruthenberg. At one point, they were neighbors and would have playdates with their children. Over time, the two eventually discussed sharing Johnston’s story.

The book was published by the University of Illinois Press in May 2019 and tells the story of Oak Lawn native David Johnston who was on Mount St. Helens when the volcano came to life in March 1980. He was one of 57 people who died that day.

Throughout the prior spring, Johnston was part of a team that conducted scientific research that underpinned warnings about the mountain. Those warnings helped to save thousands of lives when the most devastating volcanic eruption in U.S. history blew apart Mount St. Helens, but killed Johnston on the ridge that now bears his name – the Johnston Ridge Observatory. The observatory that opened in 1997 serves as a learning and resource center.

“The stories of ordinary people are worth telling,” Holmes said. “David was only 30 years old when he died. My book highlights what came first – the 30 years prior.”

In her book, Holmes shares Johnston’s life from a nature-loving Boy Scout to a committed geologist. Blending science with personal detail, she follows Johnston through encounters with Aleutian volcanoes, his work helping the Portuguese government assess the geothermal power of the Azores, and his dream job as a volcanologist with the U.S. Geological Survey.

Research for the book came directly through interviews with Johnston’s family, his childhood friends, colleagues, college friends at the University of Washington where Johnston earned his PhD., and Johnston’s own diary writings from the ages of 15 and 16.

“Through all of this, with the trust of his family, I was able to set the record straight on who David was,” Holmes said. “He was an amazing, good-hearted person.”

Johnston, who grew up in Oak Lawn, lived through the Oak Lawn tornado of 1967. He was only a senior in high school at the time. Holmes discussed the tragic coincidence of living through one natural disaster only to die in another.

Although, his story may appear to have a sad ending, Johnston, who was a 1967 graduate of Richards High School in Oak Lawn, has encouraged local teens in his hometown to dream big.

“I recently spoke at Richards High School which was wonderful because it gave students the opportunity to see that someone who was once in their shoes, who lived and grew up in Oak Lawn, went on to accomplish all he did in life,” Holmes said. “It not only gives hope to but also inspires teens and even children today.”

After his death, his parents commissioned an Oak Lawn artist to make a painting from a photograph of their son. That painting hangs at Cascades Volcano Observatory in Vancouver, Wash. A seven-pound volume explaining the Mount St. Helens catastrophe is dedicated to Johnston. In it, it describes Johnston as “an exemplary scientist,” who had an “infectious curiosity and enthusiasm.”

“We love to support local authors,” Keaty said. “She discussed the facts of the book, her research, and her writing process. The program acquired a lot of interest from local residents and potential writers as well.” 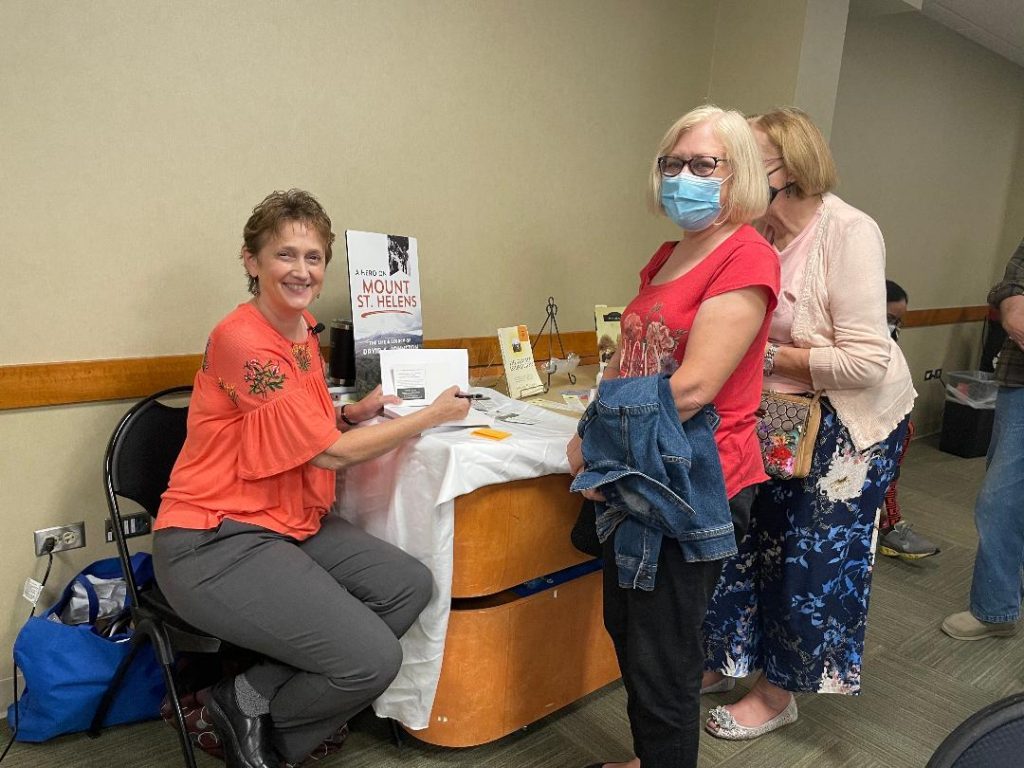 Melanie Holmes, author of “A Hero on Mount St. Helens: the Life and Legacy of David A. Johnston,” signs copies of her book after her presentation at the Evergreen Park Public Library, 9400 S. Troy Ave., Evergreen Park.