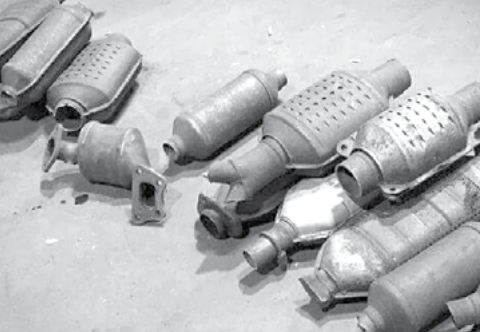 A crew of thieves has been hitting the streets of Clearing and Garfield Ridge, stealing catalytic converters. 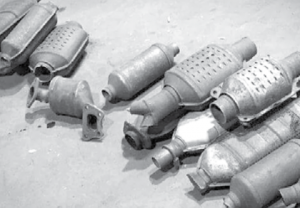 The problem was discussed at the October meetings of CAPS Beat 811 and 812, which cover Garfield Ridge and Clearing, west of Central Avenue.

At the Beat 811 meeting at Ward Hall, Officer Raymond Tracy noted that from late September through early October, CPD received reports of catalytic converters being stolen from vehicles parked near 57th and Mason, 58th and Mason, 59th and Austin, 54th and Nagle, 52nd and Narragansett, 54th and Nordica, 58th and Natoma, 51st and Newcastle, 58th and Normandy. 55th and Natoma, 52nd and Rutherford, 55th and Monitor, 53rd and Normandy, and 53rd and Neenah. The vehicles were parked on the street.

He added that the most recent vehicles targeted appear to be mostly Mitsubishi Outlanders and the Honda Sierra CRV. In the past, thieves have targeted the Jeep Liberty.

In at least one instance, the thieves were driving a dark-colored Infinity with a license plate number starting with CX, according to a witness.

Tracy said thieves will case blocks days ahead of time, looking for vehicles to target. They then strike in the overnight hours, minimizing the chance they will be caught.

“So that makes it doubly important that if you see a suspicious vehicle circling your block again and again, call 911 and ask us to check it out,” Tracy said. “Give us a description of the vehicle so we can maybe make an investigatory stop and see what they’re up to.”

But he cautioned against confronting or following the thieves, saying that in one recent instance in Beat 834 (covering the Ashburn, Parkview and Scottsdale neighborhoods), a victim jumped in his vehicle and followed the thieves, only to be shot at.

“We don’t recommend that you follow anybody,” Tracy said. “Just get a description and let us handle it. Ultimately, I can’t tell you what to do, but that’s what I suggest. So if it’s two o’clock in the morning and you hear a saw outside, have your phone in your hand and look out your window. If you see something suspicious, just call it in to 911 right away. Give us a description of the vehicle and the direction it headed in, and we’ll try to find them and make a stop.”

Catalytic converters have been required on all vehicles since 1975. Without the converters, vehicle engines often do not perform as well, are noticeably louder and release more pollution. A converter is an emissions-control device that has precious metals — platinum, palladium, rhodium — which act as catalysts.

The theft typically occurs quickly, often with a two-man team—one serving as a lookout and the other crawling under a vehicle and using a cordless power saw to remove the catalytic converter in less than a minute.

Vehicles targeted tend to be SUVs and other vehicles with undercarriages a bit higher off the ground than, say, a sedan. Raised undercarriages make it easier for a thief to slide under and steal the converter.

In response to a Clear-Ridge Reporter & NewsHound question about why, if police can’t catch the thieves in the act, don’t they just target the buyers of the stolen converters, Chicago Lawn (8th) Distict Commander Bryan Spreyne said he thinks the buyers aren’t in Chicago.

“It’s big business,” he said. :I don’t think the thieves are selling the stolen catalytic converters here in the city. I’m sure they crating them up and shipping them out, maybe even out of the country.”

The next CAPS Beat 811 meeting—which doubles as the monthly meeting of the Garfield Ridge Neighborhood Watch—is set for 7 p.m. Tuesday, Nov. 16 at Ward Hall, 52nd and McVicker.