November 8, 2021/Comments Off on High School Football Class 7A Playoffs: Mount Carmel moves on with batty win over Batavia 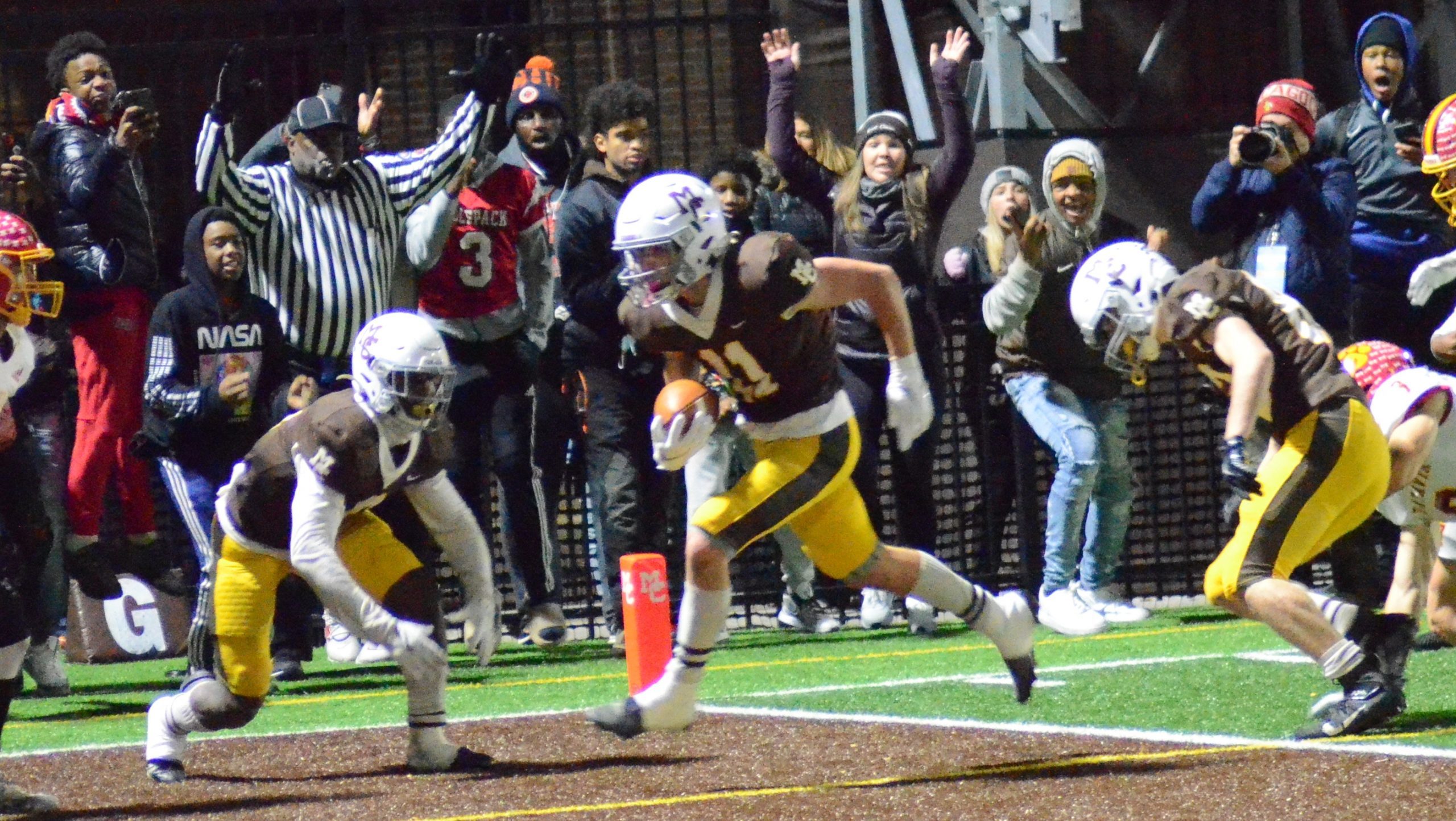 The Mount Carmel wide receiver took a handoff from quarterback Blainey Dowling on an untimed down with a Class 7A second-round playoff game on the line and the Caravan down by four points to No. 1-seeded Batavia.

His first two choices were to catch the Bulldogs’ defense by surprise with passing opportunities.

The third choice was, as coach Jordan Lynch put it, “run the ball and be an athlete.”

With the first two options gone, he ran the ball and was an athlete for a 9-yard touchdown to give the 17th-seeded Caravan (8-3) a wild 16-14 victory over previously unbeaten Batavia on Nov. 5 in Chicago. Mount Carmel Students stormed the field when the classic battle was over.

“The coaches made a great call,” said Furlong, an Evergreen Park resident. “I saw an opening. I ran it in. Scored.”

He also had a 46-yard catch to keep the drive alive.

That sets up an exciting rematch for the defending 7A champs at Brother Rice (9-2) in the quarterfinals. The two teams faced each other Oct. 1, when Brother Rice quarterback Jack Lausch threw a 65-yard touchdown pass to Danny White with 50 seconds left to help pull off a 42-36 Chicago Catholic League/East Suburban Catholic Conference Blue victory.

“Oh, God, we’ve been waiting for this the whole time for this one,” Dowling said. “It was a good game against them last time.”

The narrow win over Batavia, coupled with second-round wins by Brother Rice plus 8A wins by Loyola and Marist, gave the Blue conference a perfect mark in the playoffs, as all four teams are in the quarterfinals of their respective classes.

The final Mount Carmel drive started with 4:04 left on the Caravan 9 yard line.

On a fourth-and-8 from its own 43, Mount Carmel committed an illegal procedure penalty but was bailed out on a pass-interference call against the Bulldogs on the next play.

Dowling found sophomore Darrion Dupree on another drive-saving third-down play for a 9-yard gain, and Dowling’s 15-yard run in the closing seconds put the ball on the Bulldogs’ 6.

Then things got interesting.

On a trick play, Dupree misfired on a pass and Dowling threw an incompletion. With a third-and-goal with :04 left, Dowling’s pass did not find a target and the Bulldogs started celebrating; however, the were whistled for a second pass interference call which incensed the Batavia coaching staff, players and fans. 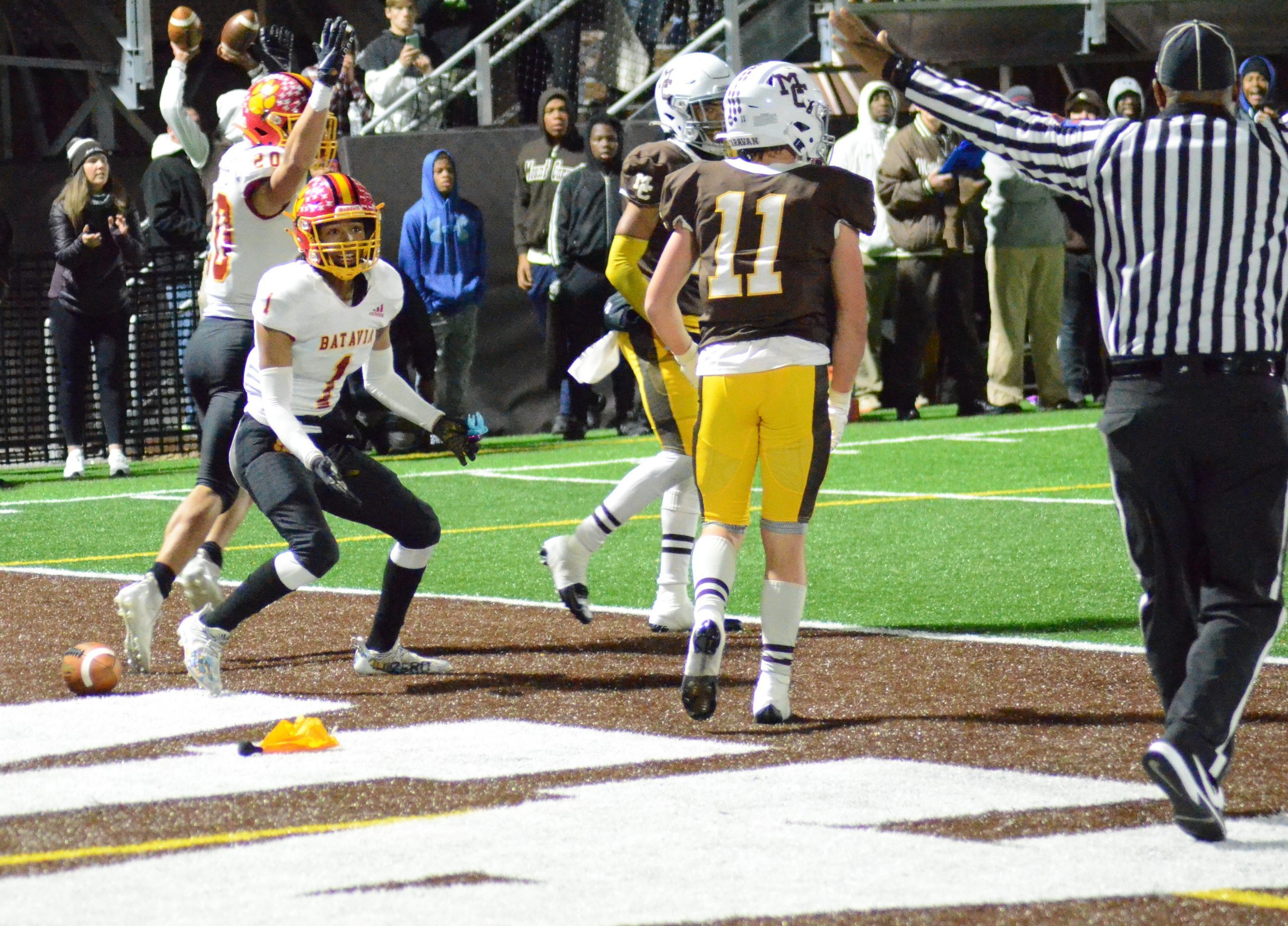 Batavia’s Anthony Roberts (No. 1) can’t believe his team was called for pass interference in the end zone on what appeared to be the final play of the game against Mount Carmel on Friday. Photo by Jeff Vorva

That gave the Caravan an untimed down to work with.

Mount Carmel called a timeout to set up a play but still couldn’t get that play off and was whistled for a delay-of-game penalty, which put the ball at the 9 and set up Furlong’s play and the Most Holy Redeemer grad hit paydirt.

“He’s one of the best athletes on our team,” Dowling said. “You want to put the ball in his hands every chance you get. The pass wasn’t there, so he ran it in. That’s what he’s all about.”

Dowling found sophomore Darrion Gilliam with a scoring pass and Louis Chappetto kicked a field goal in the first half as the Caravan trailed 14-10 after the first half.

Derek Whatley’s defense on a pass stopped Batavia after a 15-play drive in the third quarter and Danny Novickas had a huge 11-yard fourth-quarter sack to force the Bulldogs to punt.

These two programs have a brief but interesting history.

In 2013, the first year the IHSA used Huskie Stadium in DeKalb for its championship games, Batavia won the Class 6A title. The next event on that field was Mount Carmel winning the Class 7A title game.

In 2014, Batavia moved up to Class 7A and fate – and seedings – had the two champs playing each other in the first round, with the 14th-seeded Caravan pulling off a 20-16 victory on the road over the third-seeded Bulldogs. 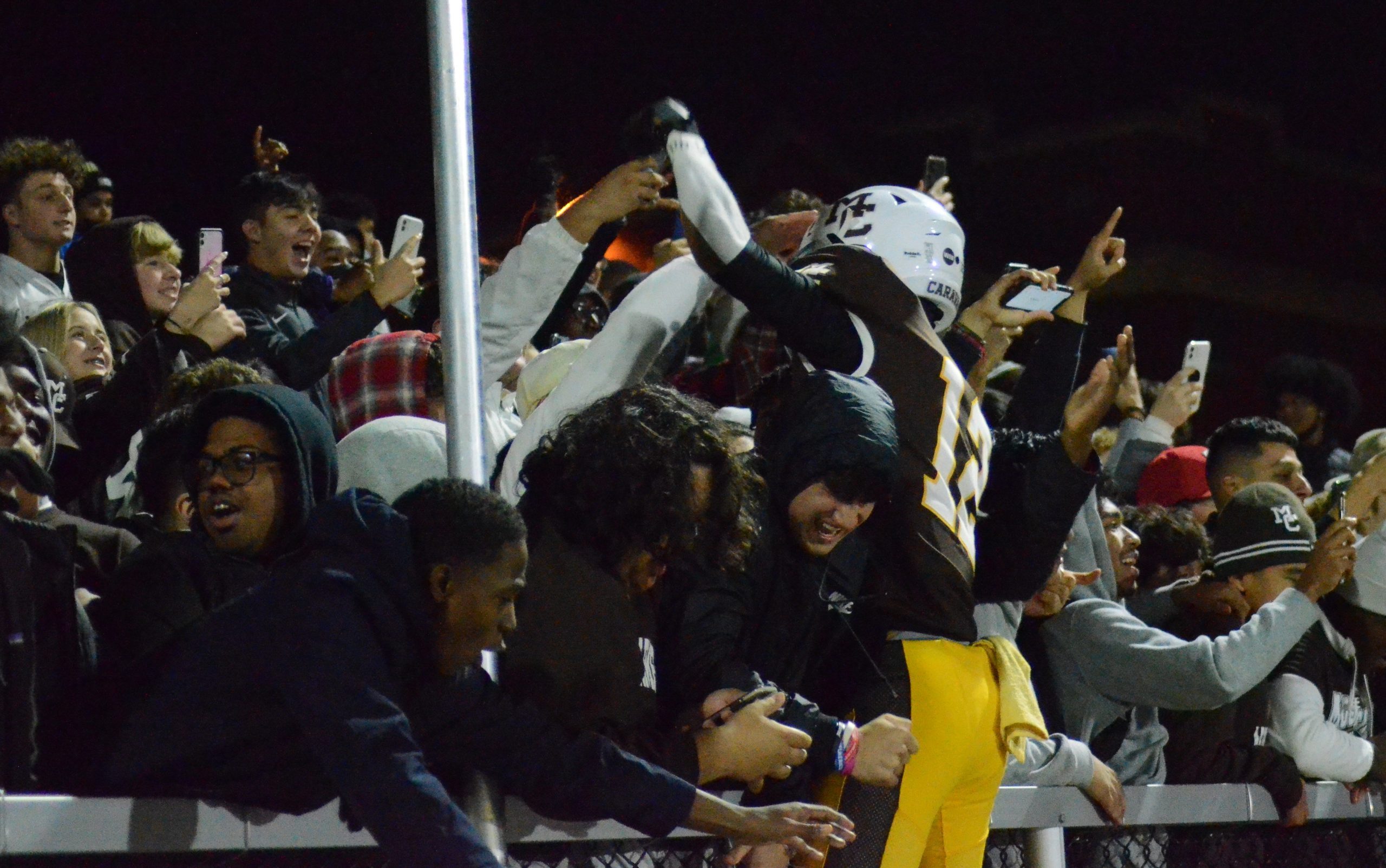 Mount Carmel’s Noah Smith celebrates with the crowd after a wild 16-14 victory over previously unbeaten Batavia on Friday night. Photo by Jeff Vorva