Skip to content
November 11, 2021/Comments Off on Chicago Ridge crossing guard retires after 30 years of service 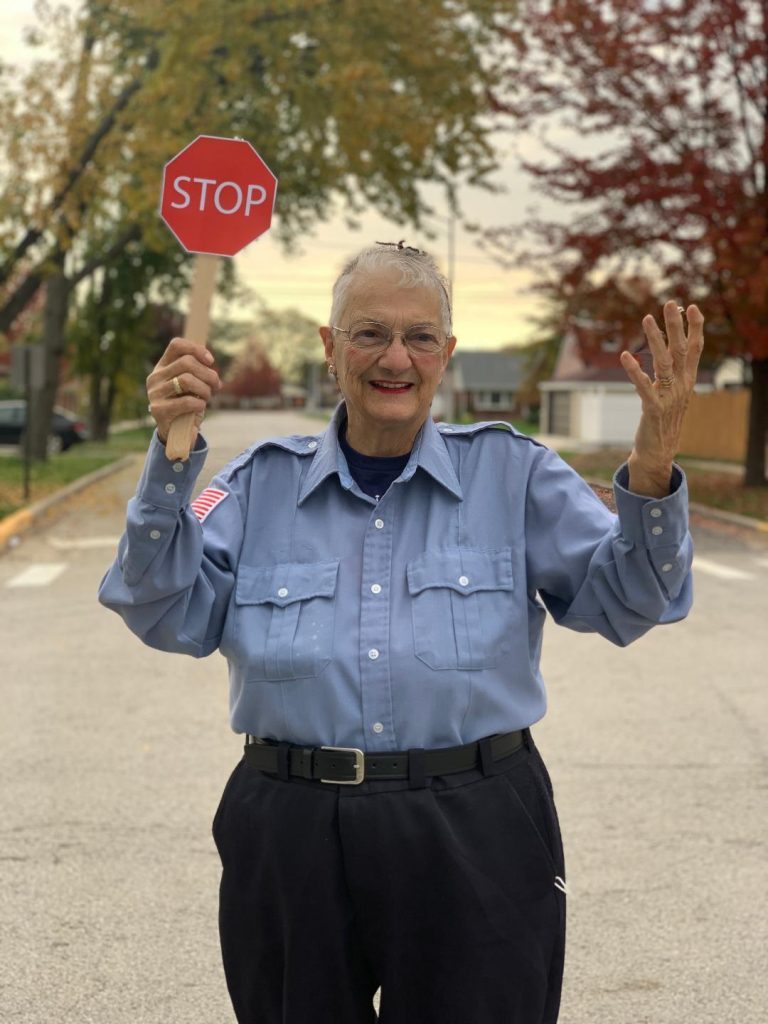 When Mary Powers moved to Chicago Ridge from Marquette Park in 1991, she found her calling.

Chicago Ridge School District 127.5’s Ridge Central Elementary School was in need of a crossing guard at the corner of 108th and Lyman Avenue. It was there at the beginning of the 1991 school semester in September, Powers set up her post, and where she worked hard for year after year in all kinds of weather.

This year, she said goodbye to a job she loved when she retired after 30 years of dedicated service.

“I loved everything about being a crossing guard,” Powers said. “Even the winters. I’m a January baby, so the cold and snow never bothered me.”

Powers recalled, several years ago, one child sticking his tongue to the street pole on her corner during on an extremely cold winter day.

“It stuck!” Powers said. “Just like in A Christmas Story. I marked the spot on the pole, and the student, who is in his 40’s now, still visits occasionally and tells the story to his own family.”

Memories like that are what Powers said she will miss the most.

“I was able to watch these kids grow up, from preschool through high school, seeing them go to Ridge Central, then Finley and eventually Richards High School,” Powers said. “I will miss the kids. I will miss the people. You give a part of yourself to these kids. I know them and they know me.”

“Mrs. Powers treated the thousands of people that she crossed throughout the years with kindness and respect,” Fickes said.

One thing that made Powers stand out even more was her whistle.

“Everyone knew it,” she said. “It was so loud. The kids thought I had a whistle on me and I didn’t. They would often try to mimic it and we would share laughs.”

She would arrive a half hour early to every one of her shifts, in the early morning when school was starting and, in the afternoon, when school let out.

“I never wanted to be late,” Powers said.

In fact, her husband, Walter, to whom Powers was married to for 51 years, would drive her to her post every morning and afternoon until he passed away four years ago.

“He’d drive me to the corner and wait for me,” Powers said. “People would often ask me if I drove at all. I said yes, I do, but Walter likes to drive me. It was time we had together. In the mornings, we would usually go out for breakfast after I was done working. It was really nice, and all of the parents and students eventually knew him too.”

All the school’s corner patrol students would want to be stationed at ‘Mrs. Powers’ Corner’, according to Bryan Gerk, Head Teacher/Physical Education Teacher at Ridge Central Elementary School.

“The Ridge Central students who did patrols loved to be by Mrs. Powers, because she treated them so well,” Gerk said.

As if her crossing guard responsibilities weren’t enough, Powers also worked as a desk clerk for the Chicago Ridge Police Department for the last 30 years, as well. She also retired from that role this year.

“I’m 80 years old now, it’s time to let the positions open for someone else,” Powers said.

She is an active volunteer with Our Lady Ridge Church and throughout the years, has participated in hundreds of events within the Village Sponsored Senior Citizen Group.

Powers’ plans for retirement involve traveling, especially up to South Haven, Mich., taking time to enjoy nature and spending more time with her daughter, Catherine Rose, and her granddaughter, Angelique.

Students and parents will miss her on the corner of 108th and Lyman Avenue as much as she will miss them. She has collected countless cards over the years thanking her simply for keeping everyone safe.

Chicago Ridge resident, Maureen Bruce, who lives on the corner of 108th and Lyman said Powers will be missed by her entire family.

“Mary was both of my sons crossing guard on the corner of 108th and Lyman since they were young,” Bruce said. “She is such a special lady. She really watched out for them. She also always had a biscuit ready every day to give to our dog, Brady, who passed away. After Brandy passed, we got a new dog, Lily, and Mary continued the tradition of bringing her daily dog treats. I will miss her whistling and calling out to the patrol boys and girls.”

Powers also brought toys and treats to students who she knew were having difficult times at school.

“It would be something small, like a stuffed animal, but it would brighten their day, and being able to see them smile and to be there for them was what my job was all about,” Powers said. “I was much more than just a guard.”

And, she’s right, she was not just a crossing guard, for 30 years, she was a friendly face and a much-loved staple in the Chicago Ridge community at the corner of 108th and Lyman Avenue.

“Mrs. Powers is truly a Ridge Central Star,” Megan Nothnagel, Principal at Ridge Central Elementary School, said. “Mary has a warm and loving personality that shines brightly. She has been a dedicated Crossing Guard for Ridge Central, and we all miss her smiling face at the corner of 108th and Lyman Avenue. She was a vital part of keeping our students, teachers, staff and buses safe every day for 30 years rain or shine. We wish her the very best in her retirement, a well-deserved retirement.”