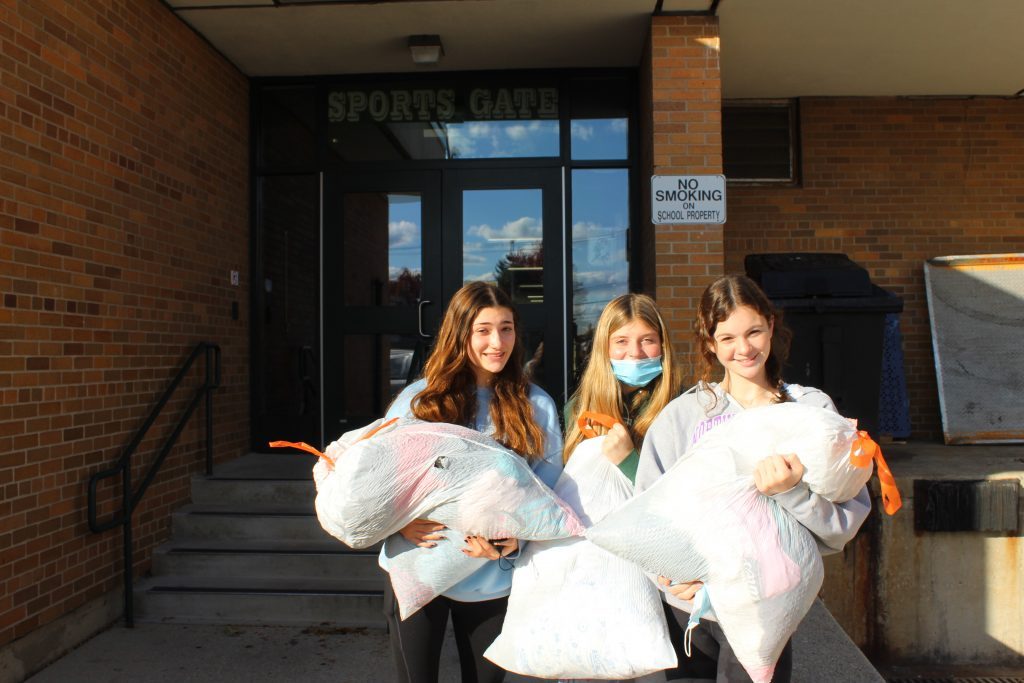 Karla Miller (from left), Maddie Bruno and Maddie Donovan, all 14-year-old students at Evergreen Park Community High School, hold bags of clothes that have been donated as part of the freshman class clothing drive. (Supplied photo)

Looking to keep others warm during the holiday season are students at Evergreen Park Community High School.

Freshmen at the school, 9901 S. Kedzie Ave, Evergreen Park, held a clothing drive during the first week of November.

“I wanted to help out the freshman class, get involved and help the less fortunate while doing it,” Maddie Bruno, 14, of Evergreen Park.

Gently used clothing for men, women, children and babies in all sizes were collected. Donations of curtains, bedding, blankets, towels, socks, hats, gloves, scarves and other winter gears and fabrics were also accepted.

The donations will go directly to benefit Savers, a thrift store in Orland Park located at 15625 S. 94th Avenue.

“Savers is a local organization that supports the reuse, repurpose, upcycle mentality and helps keeps sellable items out of landfills and provides families a way to give back to others while also cleaning out their closets at the same time,” Anna Papasideris, Evergreen Park Community High School science teacher, said. “Savers partner with non-profit organizations, such as schools, to help fund our programs.”

Papasideris co-chaired the event for the freshmen class of 2025 along with Evergreen Park Community High School English teacher, Michael Carey.

“This is a great event because not only does it get the community involved, it also allows student volunteers to be involved with philanthropy,” Carey said. “With the holidays being around the corner and in such trying times, being able to provide for others is reassuring for those who are involved. Not only does it benefit the Freshmen class, it is a way to raise money in a low-stakes kind of way where it doesn’t feel forced, and anyone can contribute to the cause – rather than, say, trying to raise money by selling certain items, or hosting a car wash. Plus, it is always reassuring knowing you are contributing to something positive, because practically everyone we know has clothes which take up space and are never worn anymore.”

The class of 2021 has held the clothing drive for the past two years, and school officials are hoping the class of 2025 continues it for their four years at the high school.

Students involved said they would be happy to carry on the tradition, including freshman and a member of student government, Maddie Donovan.

“I want to be involved at school, and I also wanted to help out the less fortunate,” Donovan, 14, of Evergreen Park, said.

The school collected about 100 bags and boxes of clothing and other additional items, making the drive just as successful as it has been during previous years. All of the collected items will be hand-delivered to Savers by Papasideris and Carey during the week of Thanksgiving on Wednesday, November 24.

“I am grateful to have been a part of this project and to be able to help out the community,” said Karla Miller, 14, of Evergreen Park.

By GRACE KINNICUTT Capitol News Illinois g[email protected] SPRINGFIELD – Illinois House Republican Floor Leader Mark Batinick, a self-described “policy guy,” came to Springfield with the goal of pushing good policy. A father of five who resides in Plainfield with his wife, Batinick said after eight years in the General Assembly, it was either time to…

By GRACE KINNICUTT Capitol News Illinois [email protected]sillinois.com SPRINGFIELD – House Majority Leader Greg Harris, the number two Democrat in the Illinois House of Representatives, never imagined landing the role of state representative – or that he would leave office feeling that he has been successful at it. The first openly LGTBQ leader in Illinois History,…