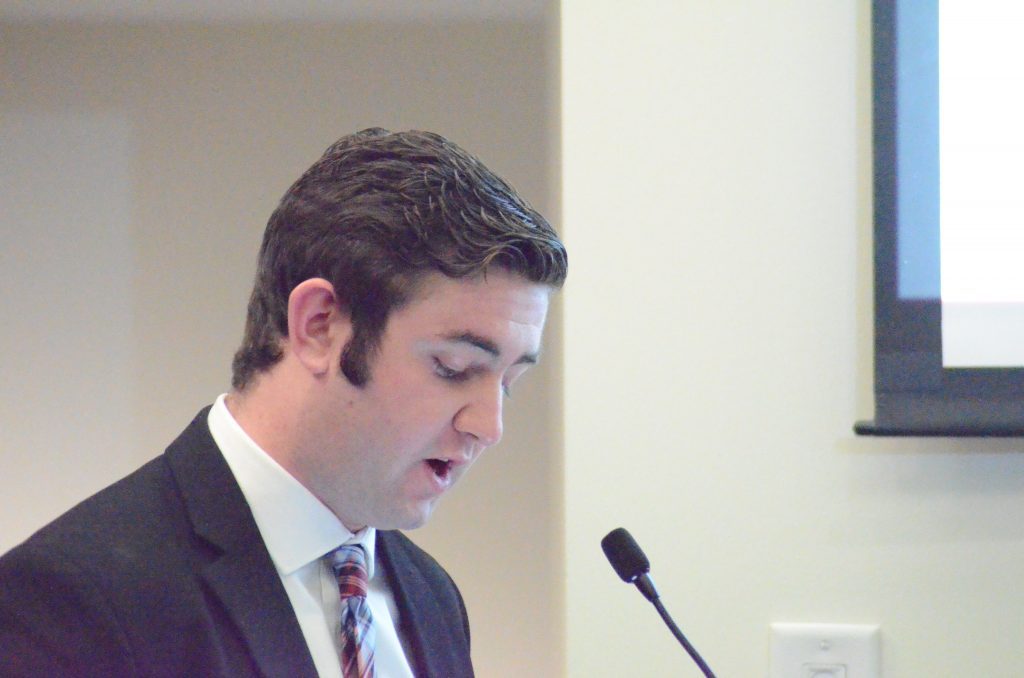 Dennis McCarthy, of Orland Park, asked the village board to consider allowing backyard chickens in the community. (Photo by Jeff Vorva)

When it comes to chickens in Orland Park, Heine McCarthy is a known name because of a catering business that has been in the village since the late 1970s.

There is another McCarthy, who said he was not affiliated or related to that business, who wants to make an impact in Orland regarding chickens.

Resident Dennis McCarthy, 22, a graduate of St. Laurence and Lewis University, spoke to the Village Board last week about the possibility of adopting an ordinance allowing backyard chickens at the homes of village residents.

He presented his case during the citizens comment portion of the Nov. 1 meeting and brought in all sorts of facts and figures and reasoning as to why this is a good idea.

He cited that several suburbs allow chickens, as well as Chicago itself.

“A common misconception is that they are very noisy,” he said. “This is simply not true. At their absolute loudest, laying hens reach the same decibel noise level as a normal human conversation.

“The fresh eggs they lay are great for families. Chickens can be fun to interact with and train and the make little to no noise at all. Allowing backyard chickens would be economically beneficial to the residents of Orland Park.”

He threw out numbers from studies that said egg prices rose between 3 and 4 percent in 2021 and the averages price for a dozen eggs is $1.84.

McCarthy said a hen can be purchased for less than $5, has a life expectancy of seven years, and can produce 1,400 eggs in a lifetime.

He added that 10 million households have chickens and more people would consider moving to Orland Park if chickens were allowed.

The board, as is its custom, did not respond or comment on his presentation but Trustee Joni Radaszewski thanked him for his comments and after the meeting, Trustee Cynthia Nelson Katsenes sought him out and talked to him.

“I wanted chickens for a long time,” McCarthy said after the meeting. “You know, this board makes it accessible for anyone to bring a point before the board.”

He pointed out that communities such as Worth, Tinley Park, Palos Park, Palos Hills, St. Charles, Naperville and Lombard have laws allowing chickens, although they have different rules and limits for them.

Thepetitionsite.com started a “Make Backyard Chickens Legal in Orland Park” petition online two years ago with the goal of getting 1,000 supporters. As of last week, it had 48 supporters, just 34 of whom were from Orland Park.