November 11, 2021/Comments Off on Stagg’s Math in Construction program has bright future 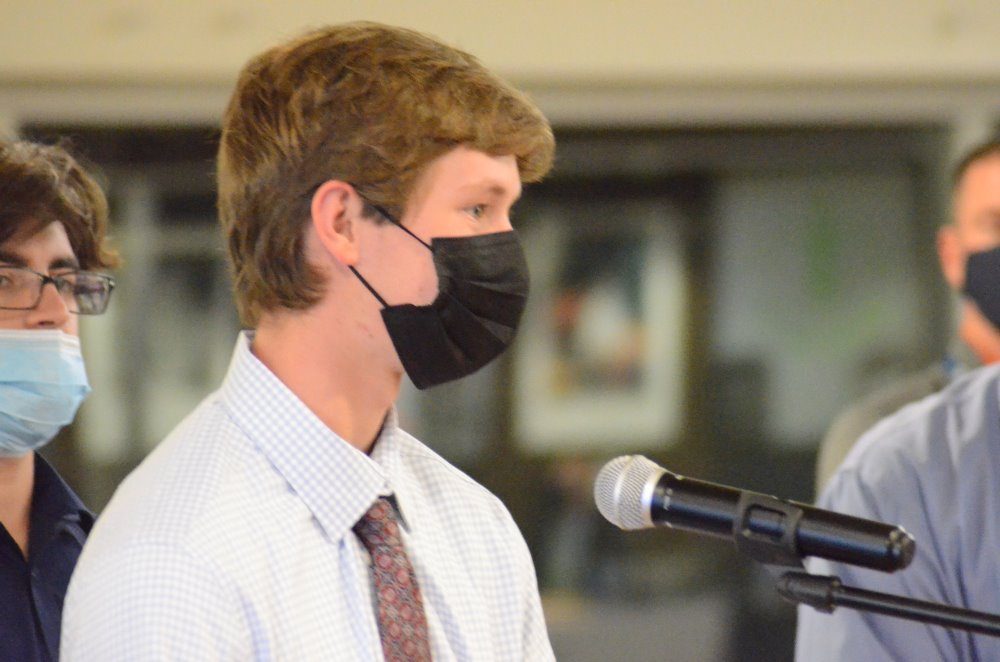 Stagg’s Zachary Zumerchik speaks to the District 230 board about the school’s Math in Construction program. (Photo by Jeff Vorva)

Pardon the pun, but Stagg could be on the ground floor of something big.

The Math in Construction course, headed up by the tag team of applied tech teacher Eric Malone and math teacher John Daniels has been getting some attention and the course was highlighted at the Consolidated High School District 230 meeting on Oct. 28.

Board members were shown a video that appeared in the “Built to Last” television show on ABC 7 in June. The class combines the use of math to build houses, although it is not at that stage yet.

It is still on the ground floor, so to speak and the group is building smaller things such as outdoor decks.

“We’re starting small. As we build this curriculum we want to get to those points. Last year, we did what we did with the number of students that we had and we still worked really hard and made sure the students who were home were also involved.”

Some students told the board that using the math and all of its decimals and fractions to be a little daunting at first, but they were able to get through it.

The other huge value to the course it that it offers skills that students who do not want to go to college may find useful.

Board President Tony Serratore said he hoped that the program will expand to Sandburg and Andrew, the other two schools in the district and Daniels said it is starting at Sandburg.

“This is a class I hope that will be a blueprint for our district,” he said. “We want to continue to make school that is something that connects to your life beyond high school. I think this will be helpful for us to do just that. You took a risk and it paid off. That will help us build a platform and it helps us move forward.”

One student who was originally against going to college said he may be changing his mind after taking the class.

“I didn’t want to go to college, I want to go to into the trades and I saw this class and I took it,” said Zachary Zumerchik. “A few weeks ago, Mr. Daniels talked about construction management, and I thought that was something I wanted to do. I realize that you need to go to a four-year school, and I said I’ll do that.”

Family toy drive benefits Comer Children’s Hospital By Kelly White Early on in her life, Madelyn Rodrigues was diagnosed with Osteogeneis Imperfects, a brittle bone disease that has already resulted in more than 70 bone fractures in her 14 years of life. As a freshman at Illinois Lutheran High School in Crete, Madelyn’s inner strength…

Thankful for the man who gave us Peanuts

By Peggy Zabicki Your correspondent in West Lawn 3633 W. 60th Place • (773) 504-9327 Did you know that Charles M. Schulz, author of the Peanuts cartoon series, was born on Nov. 26, 1922? I’m thankful and grateful for his creativity, which has endured the test of time. His cartoon movie, A Charlie Brown Thanksgiving, was first…

By Kathy Headley Your correspondent in Chicago Lawn and Marquette Manor 6610 S. Francisco • (773) 776-7778 So after eating the big Thanksgiving meal and maybe planning some weekend shopping, if you are a Marquette Bank customer, you might want to take the 2021 Customer Survey before it’s too late. The deadline is Nov. 30.…

There are many Jewels, but ours shines brightest

By Karen Sala Your correspondent in Gage Park (773) 471-1429 • [email protected] Turkey Day is over, and now it’s time for leftovers! I enjoy leftovers from Thanksgiving dinner more than the original. Even though I went by my son’s, I still made my own turkey and sides. That way I have leftovers. I was watching TV…

The best is what’s left over

By Mary Stanek Your correspondent in Archer Heights and West Elsdon 3808 W. 57th Place • (773) 284-7394 I hope everyone’s tummies are full of all that Thanksgiving goodness. In the words of actor and comedian Kevin James, “Thanksgiving, man. Not a good day to be my pants!” Now the best part about Thanksgiving being…

‘They tried to taint Ella’s legacy’

Aldermen furious with mayor, COPA chief By Tim Hadac The three aldermen representing Clearing and Garfield Ridge are among 20 City Council members opposing the appointment of Andrea Kersten as the next Chief Administrator of Civilian Office of Police Accountability. Kersten, the current interim chief of COPA, came under fire recently for releasing a report…

Holiday warmth is straight ahead

By Joan Hadac Your correspondent in Clearing and Garfield Ridge (708) 496-0265 • [email protected] Tomorrow is Thanksgiving Day, my favorite holiday of the year. I look forward to it because it’s all about family, whether it’s family of blood or heart or both. People actually slow down and catch up with each other. It’s not about…

Measure would close vax loophole By Peter Hancock Capitol News Illinois and Tim Hadac A number of Southwest Siders are pushing back against a new state law designed to clear the way for employers to enforce vaccination, testing and other mitigation measures to prevent the spread of COVID-19. The measure, Senate Bill 1169, amends the Illinois…

Back in their dancing shoes

After the pandemic forced them off the stage for more than 20 months, the boys and girls of Ballet Folklórico Estrella del Mar donned their costumes and dancing shoes last week and performed for Big Shoulders Fund representatives visiting St. Mary Star of the Sea School in West Lawn. Founded in 2015 at the…