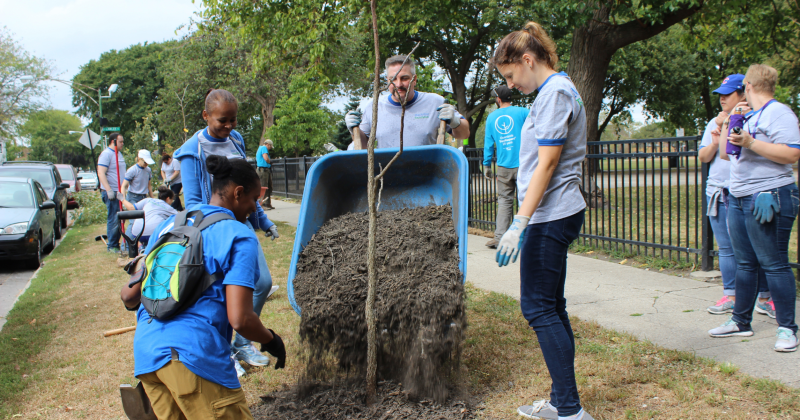 Supervised by members of the non-profit Openlands organization, Chicagoans plant a tree on a city parkway. --Supplied photo

Some SW Side neighborhoods may get greener

A plan by Mayor Lori Lightfoot to expand and refocus the city’s tree-planting operations, funded by $46 million in city tax dollars, appears to be playing well in some Southwest Side neighborhoods.

“We used to have tall, healthy trees up and down the street,” said Theresa Ramirez, of the 6200 block of South Troy. “But about 30 years ago, when these gangbangers started moving in, things began to change. One way you could see the change was the trees. These punks were pulling the bark off the trees and marking them with gang signs. 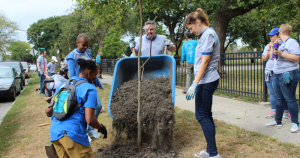 Supervised by members of the non-profit Openlands organization, Chicagoans plant a tree on a city parkway. –Supplied photo

“Then one by one, as the trees got old, the City cut them down but never replaced them,” the Chicago Lawn woman continued. “So the block became ugly and depressing. So if the mayor wants to change that, I’m all for her.”

As part of Lightfoot’s new “tree equity” strategy, the city will plant 75,000 trees across the city over the next five years. This represents a doubling in tree planting over the previous year.

Further, the strategy will prioritize the planting of trees non-white neighborhoods with high levels of poverty, “equitably conveying ecosystem benefits to communities disproportionately impacted by the climate crisis,” according to a mayoral statement.

The mayor said her effort will help meet the City’s commitment to the Paris Climate Agreement, environmental justice, and equity.

While the citywide tree canopy coverage in Chicago is 16%, it can vary between neighborhoods, ranging from under 10% in neighborhoods like Pilsen to 46% in Far Northwest Side neighborhoods.

Tree canopy coverage can have a direct impact on neighborhood air quality, temperature, flooding, and public health. Central to the city’s new approach will be planting trees where they are most needed for what the mayor called health and equity outcomes.

“We expect this historic investment to reap historic outcomes. Taking an equity-centered and data-driven approach, we can identify where trees can have the greatest impact and work directly with residents and community groups in those areas to plant and maintain trees,” said Angela Tovar, Chief Sustainability Officer for the City of Chicago. “We are committed to building a safer, stronger and more just Chicago for all.”

The Chicago Department of Public Health led the creation of a new “community site selection tool” that brings together data on tree canopy, air quality, land surface temperatures, economic hardship and other factors, with support from the Bloomberg Philanthropies Partnership for Healthy Cities.

The city will use the tool to work with local nonprofits and community groups to identify priority communities and locations to plant trees. This, combined with the increase in funding for tree planting over the next five years, will help increase the number of trees in neighborhoods throughout the city and reduce the impacts of climate change on these communities.

Bloomberg Associates, a pro bono municipal consulting service, has provided strategic advice on the development and rollout of the tree equity strategy.

“Mayor Lightfoot’s investment will make a significant positive impact on the health of Chicago’s urban forest,” said Lydia Scott, director of the Chicago Region Trees Initiative. “We look forward to continuing our partnership with the city to provide an increased and more equitably distributed tree canopy for its neighborhoods.”

In the southwest corner of Back of the Yards, Evelene Marbury welcomed Lightfoot’s move.

“I’ve lived here 42 years [near 52nd and Damen], and this place used to look nice,” she said. “We had Cornell [Square] Park right on 51st Street, and the streets looked decent. Back then, the City would come out and plant trees. But then that all dried up and we couldn’t even get anyone to return our calls. Look at James Street (just south of 51st Place and west of Damen). That has to be the ugliest block around. No trees, no grass, no nothing.”

The tree equity investment is one key component of what Lightfoot calls her “all-in” approach to fighting the climate crisis and part of $188 million in new funding to build resilience in neighborhoods disproportionately impacted by the effects of the climate crisis.

She said the neighborhood-specific climate interventions will build a safer, stronger, and more just city for all and cover a broad range of environmental issues, from land remediation to tree planting. Each climate and environmental initiative was developed through a lens of racial equity, centering on what she called historically marginalized and underserved environmental justice communities.

Other key investments include: