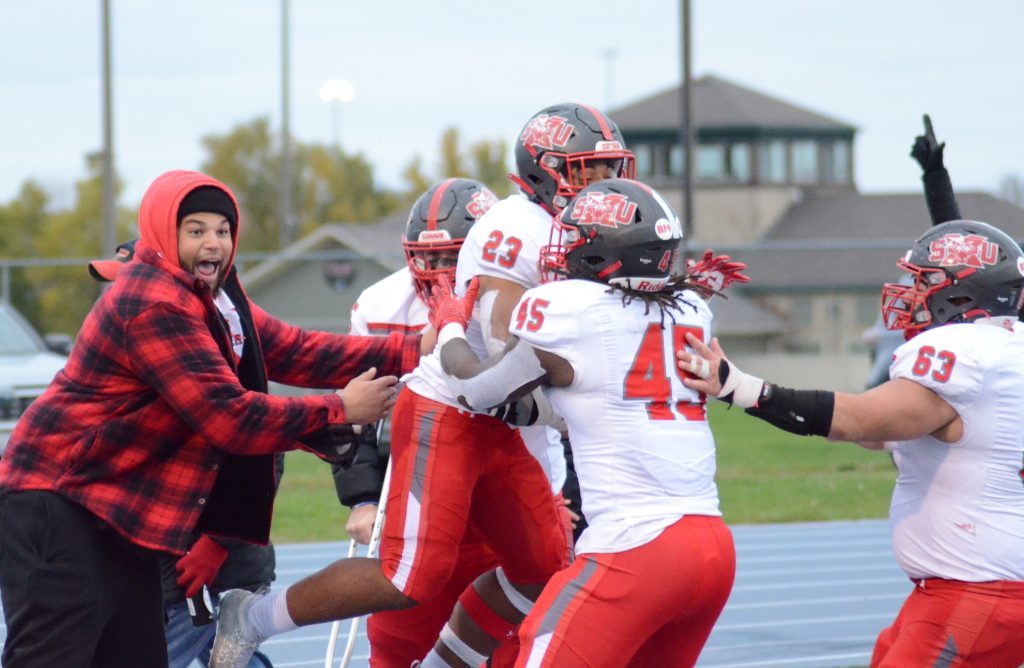 Amari Venerable (No. 23) and his SXU teammates celebrate a 26-20 overtime victory over the University of St. Francis Saturday in Joliet. (Photo by Jeff Vorva)

With an automatic bid for the NAIA national playoffs on the line, Saint Xavier and St. Francis couldn’t decide anything after 60 minutes of play.

So, the Cougars had to make it back into the playoffs in overtime thanks to a 25-yard-run from Amari Venerable on their first play from scrimmage after the Saints missed a field goal, and celebrated wildly with a 26-20 win at chilly Joliet Memorial Stadium on Nov. 13.

The Cougars (8-2 overall, 6-1 Mid-States Football Association Midwest League) drew the 11th-seed and will face 8th-seeded Concordia (Michigan) Saturday in the first round of the 16-team playoff. It’s SXU’s 14th trip to the postseason.

Concordia is 8-1, with its lone loss coming to Marian (Indiana), 25-7. Freshman quarterback Gavin Brooks leads the Cardinals with 1,859 passing yards and 19 touchdowns. St. Rita graduate and Eastern Michigan University transfer Christopher Bruglio is a defensive end on the roster.

Venerable suffered a hip injury in the first half and sat out the entire second half.

“I told him in the locker room at half time that we will only use him if we have to,” SXU coach Mike Feminis said. “Guess what? We had to.”

Venerable, who carried the ball 10 times for 48 yards in the first half with a long carry of 9 yards, made his 11th carry count big-time with a run to the left on the first play.

“We called one of our outside zone plays and it was blocked well,” Venerable said. “I gave a stiff arm and saw nothing but green in front of me.” 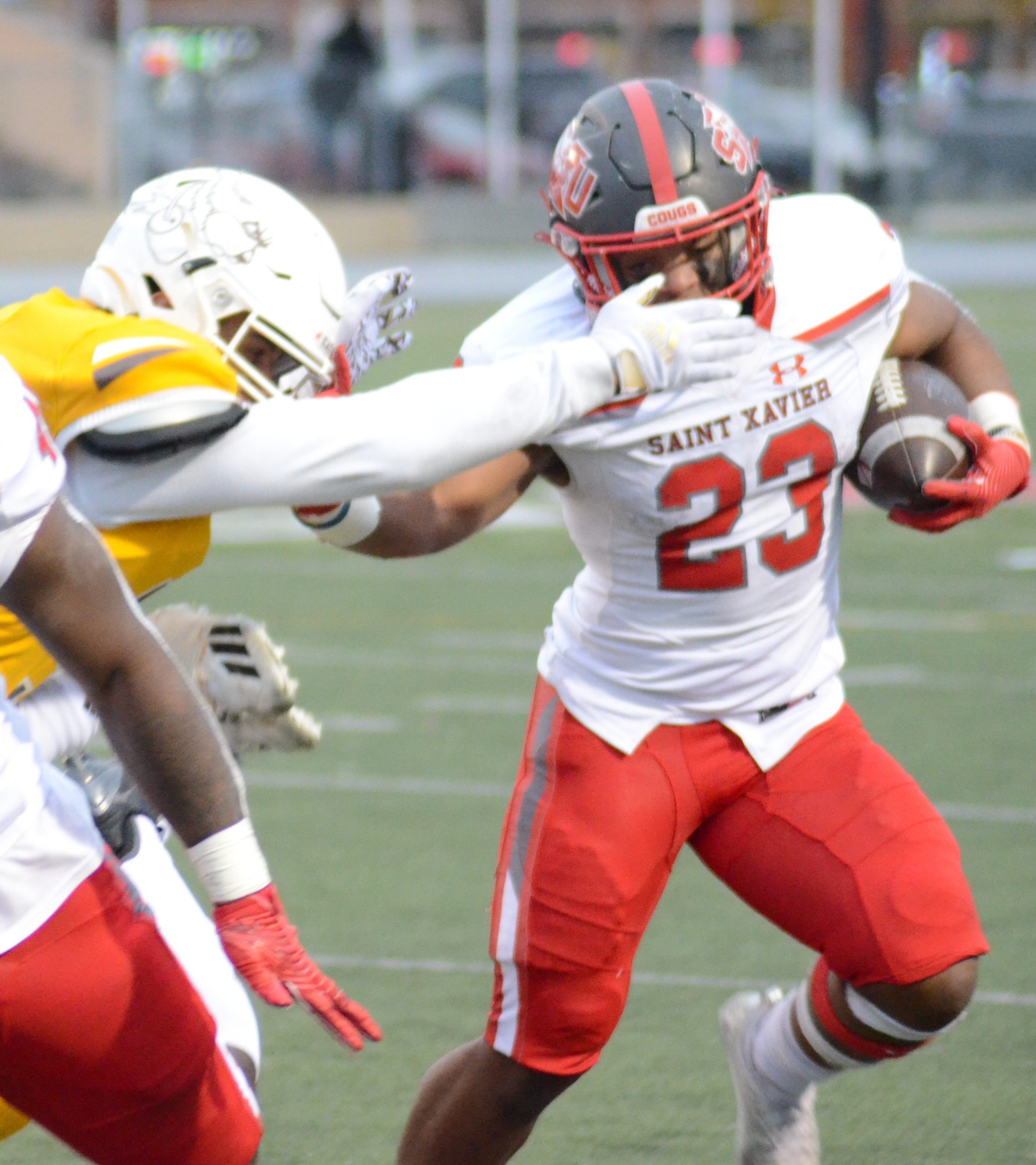 “That’s our heavy formation – it’s our goal line formation,” Feminis said. “It gives people problems. We were just going to keep chugging along.

But everything started to click after that and the Saints reeled off six wins in a row heading into the SXU game, outscoring their opponents 188-78.

They took a 10-0 lead early but SXU fought back for a 14-10 halftime lead. Stuart Ross’s 34-yard pass to Jason Pringle helped give the Cougars a 20-13 lead after three but the Saint tied it early in the fourth when Sam Tumilty hit Ravon Johnson for a 29-yard score with 14:32 left in regulation and Sandburg grad Brian Maday booted the extra point.

Tumilty rand 43 times for 235 yards and passed for 134 yards on an 8-of-23 performance. He misfired on 10 of his first 11 attempts before heating up in the second half.

This is the third time these two rivals played in 2021.

During the COVID-shortened spring season, SXU opened the season with a 19-12 victory in Joliet on Feb. 6 on a snowy day where the temperatures were in the teens and the wind chills made it feel like it was in single-digits.

The two closed the spring season in Chicago with the Cougars pulling off a 7-0 victory. 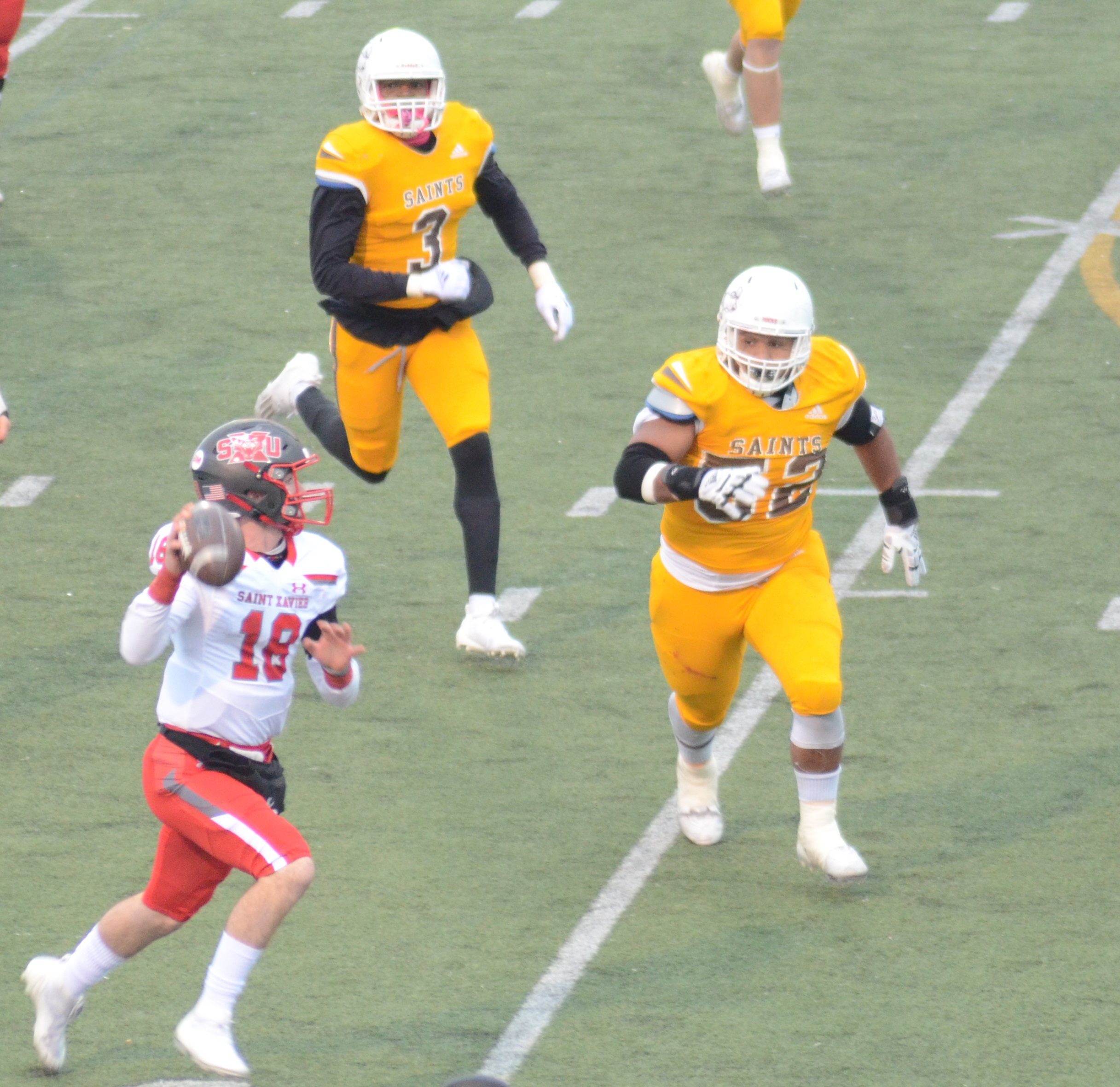