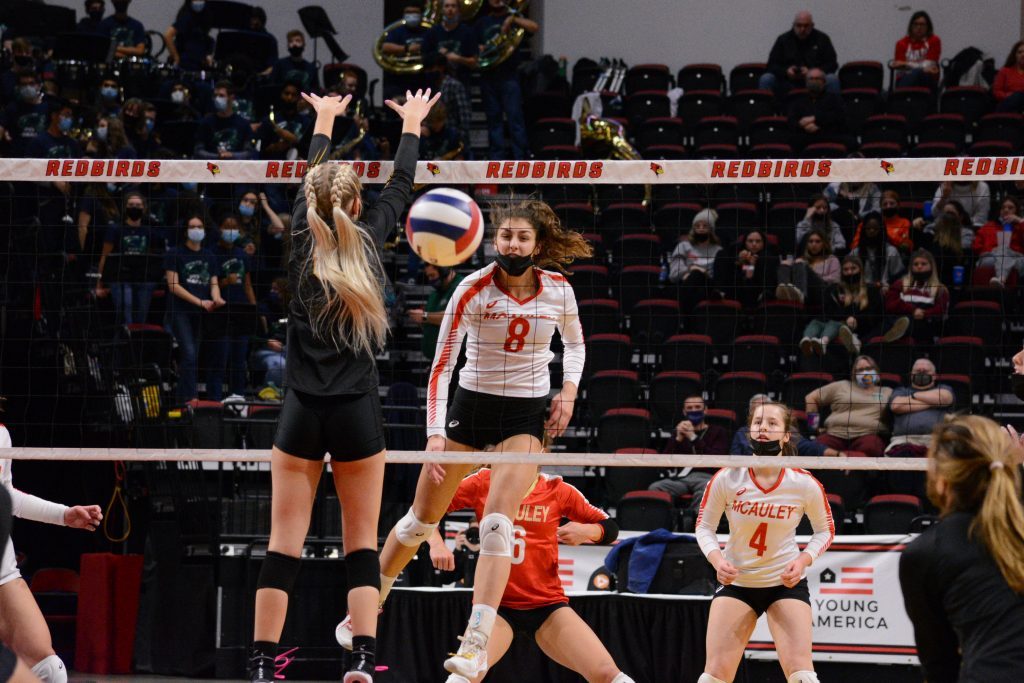 Mother McAuley sophomore Ellie White follows through on a kill during the Class 4A championship match against Metea Valley. (Photos by Jason Maholy)

You can’t win them all.

Coming into the state finals last weekend, Mother McAuley had won championships in 65 percent of its trips to state, including its last two in 2013 and 2016.

On the other side of the net was a Metea Valley squad that entered the Class 4A title match winners of 18 straight and had not dropped a set in more than two months. The Mustangs had won each of their last 11 matches in two sets, last dropping a game on Sept. 28.

McAuley promptly ended that run, coasting to a 25-15 victory in the first set and putting itself on the cusp of another state championship. It was not to be, however, as a spirited defensive effort by Metea Valley coupled with the Macs’ inability to get kills enabled the Mustangs to rally for wins in the last two sets, 25-18 and 25-17.

An apparent knee injury for Macs’ top player Caroline Macander midway through the second set did not help matters. McAuley coach Jen DeJarld said Macander pushed through pain and played in tears the rest of the way, and that the limitations the injury imposed on her star player affected the Macs’ offensive flow. 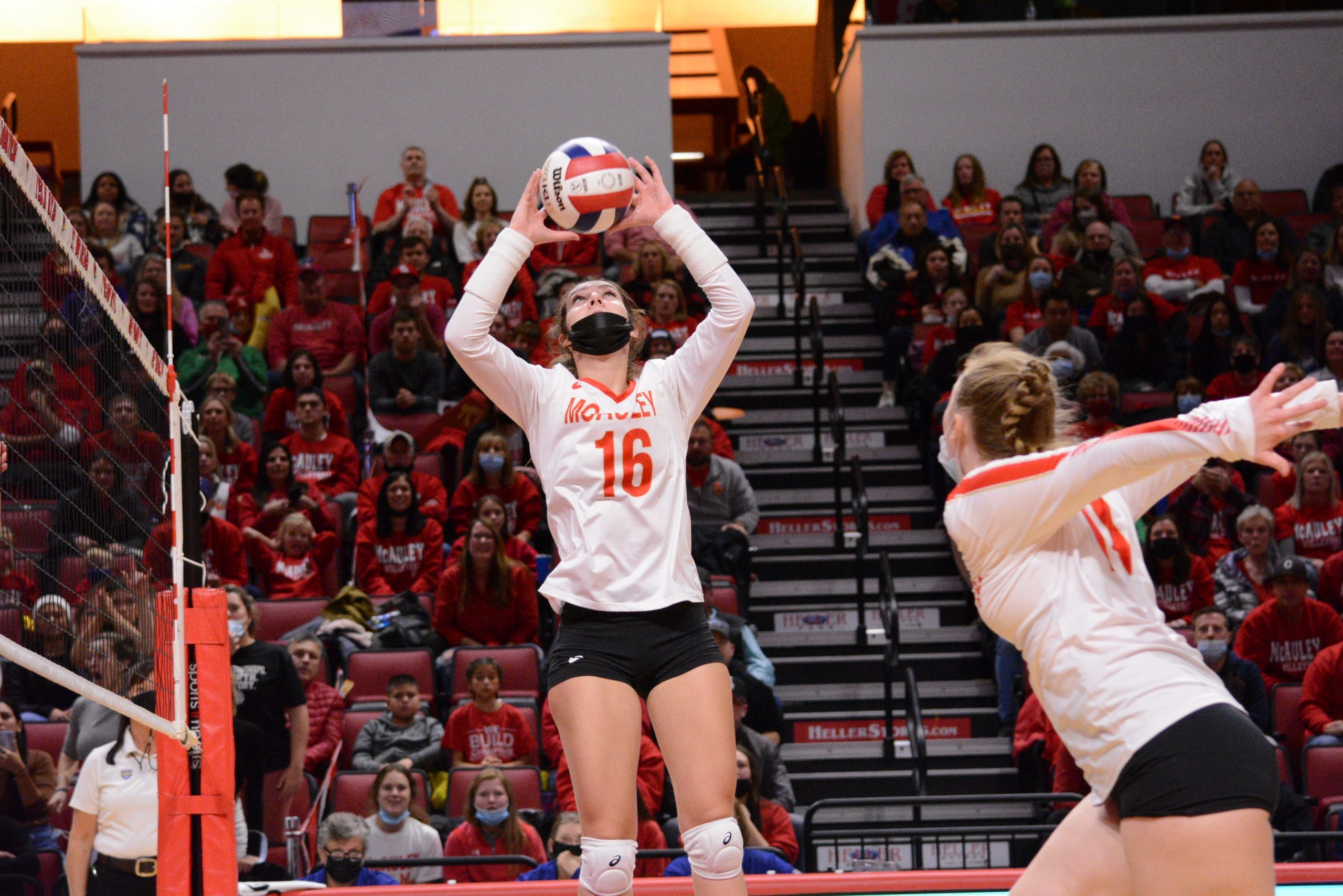 “Passing and serving broke down,” DeJarld said. “Then Caroline being hurt completely changed the flow of the second game, and in Game 3 we just didn’t execute offensively.”

Macander’s mobility was limited after the injury and it affected her decision-making, the coach added.

“She said she could play through it but I knew she was in a lot of pain,” she said.

Macander had ice on her right knee after the title match.

McAuley was strong on defense and gave itself ample opportunities to get kills, but struggled against an elite defensive effort by Metea Valley.

The Macs have under DeJarld have won two state championships in seven trips to the finals. This year was only the second time in those years they lost on the final day, the other coming when they finished second in 2007. McAuley finished third in 2005, 2008 and 2012. 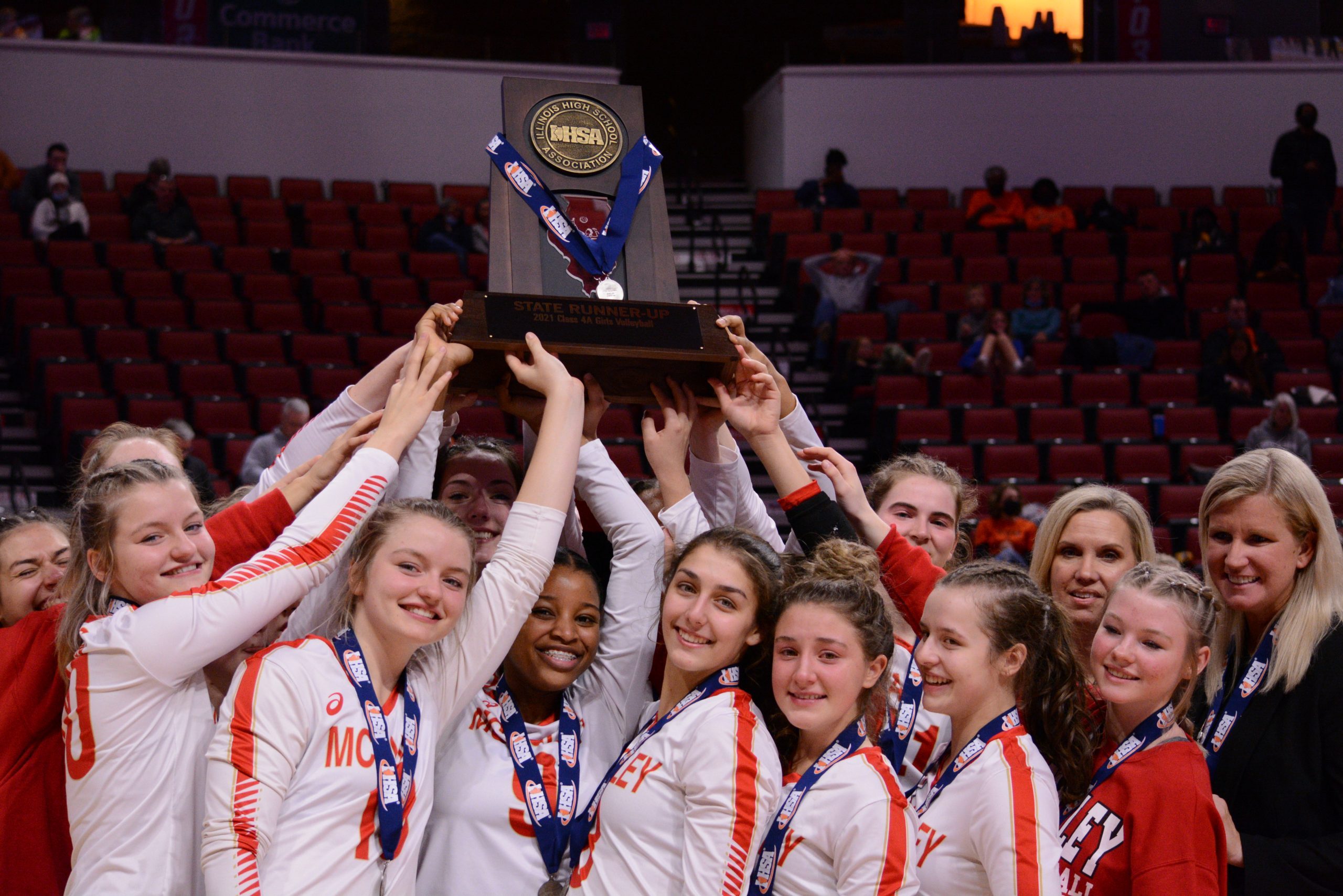 Mother McAuley players and coaches hold the Class 4A runner-up trophy after dropping the championship match to Metea Valley on Nov 13.