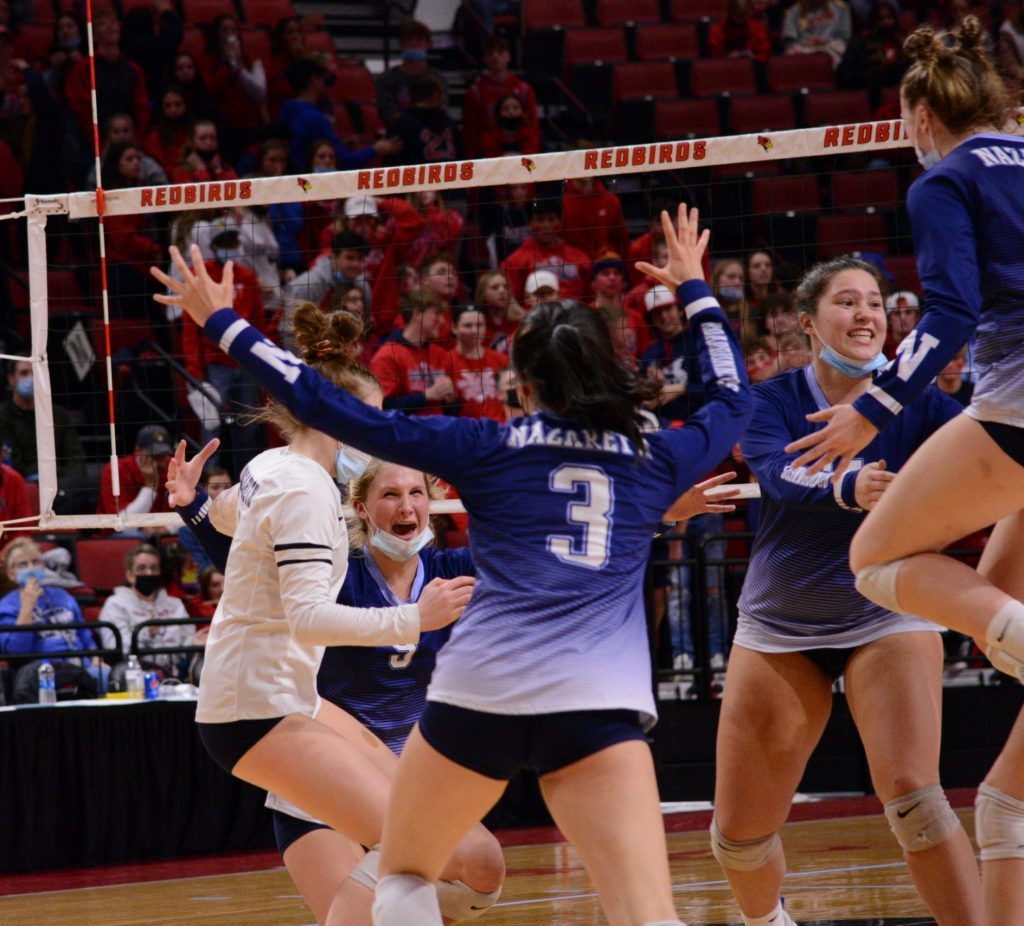 Trailing 12-6 in the third set of the Class 3A state championship match last Saturday at Illinois State’s Redbird Arena, time was running out on Nazareth to right the ship.

Belvidere North was riding a wave of momentum going back to the second set and had scored 28 of the past 43 points. However, with the way the Roadrunners were playing defense it seemed they still had a chance, if they could get their offense clicking.

Nazareth coach Melissa Masterson spent the team’s final timeout to allow her players to gather themselves for one final run at history.

Whether it enabled the Roadrunners to regroup, jammed the Blue Thunder’s good vibes or had some other tangible effect can be debated.

What can’t be refuted is that Nazareth emerged with a renewed energy and focus. They went on a 9-2 run to take their first lead since early in the second set, then scored 10 of the last 17 points en route to a 25-21 win and the program’s first state championship.

It was also the first girls athletics title of any kind for the LaGrange Park school.

Roadrunners senior Katie Hurta credited the timeout for helping the offense get going.

“We were just like, guys, let’s take advantage of this moment,” Hurta said. “I think taking that breath and regrouping helped us offensively, just helped the hitters to take a breath and have the confidence to keep swinging aggressively. I feel like we just took off from there.” 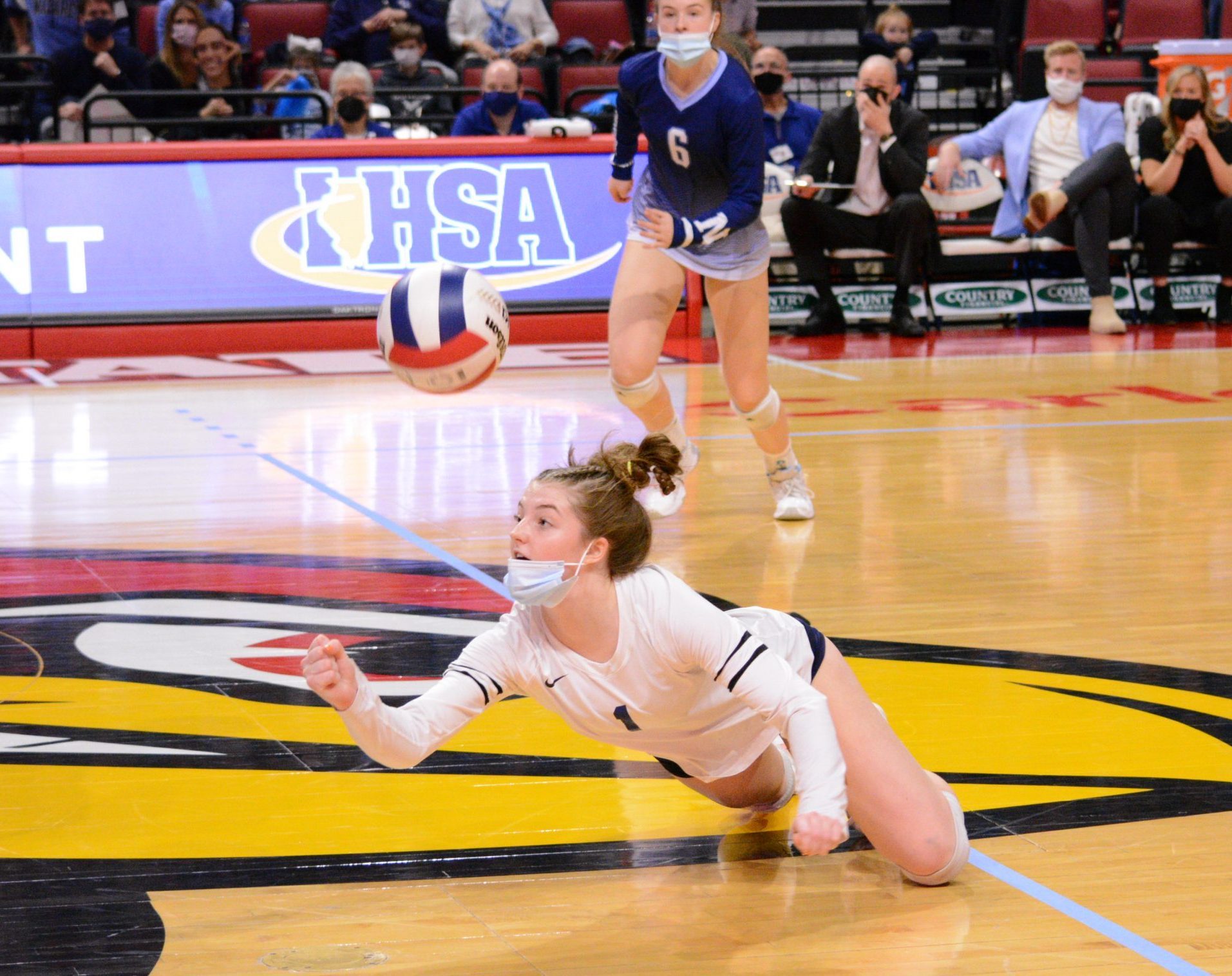 Nazareth senior libero Gillian Grimes dives for one her career-high 35 digs during the state championship match.

It was Nazareth’s defense that held the fort down while the offense struggled. After winning the first set, 25-18, the offense bogged down midway through the second, a 25-20 loss. The third was not looking good, but a strong defensive effort led by the highlight-reel digs of senior libero Gillian Grimes kept hope alive.

Grimes finished the match with a career-high 35 digs and said the third set was the Roadrunners’ best defensive performance of the season.

“I’m kind of star-struck right now, but like Coach was saying, it was all heart,” Grimes said. “I was just giving it everything that I had and I think it was, by far, the best defense we’ve played this season.

The defense thwarted the efforts of Thunder right-side hitter Rachel Scott, who had six kills in the second set and five more within North’s first 11 points of the third. But her savage kill attempts were frequently kept in play by an inspired Nazareth team. The Roadrunners just could not find a rhythm and turn those digs into points.

“We tried pretty much everything,” Masterson said of trying to neutralize Scott. “We moved players around, we did everything we could to try to limit kills, but she’s a great player and was still able to score. But with the few adjustments we did make, our players did make a few keys digs that allowed us to stay with them.”

Grimes had confidence that if they kept feeding Hurta, the senior hitter would eventually start coming through. Hurta had registered her 1,000th career kill in the first set. 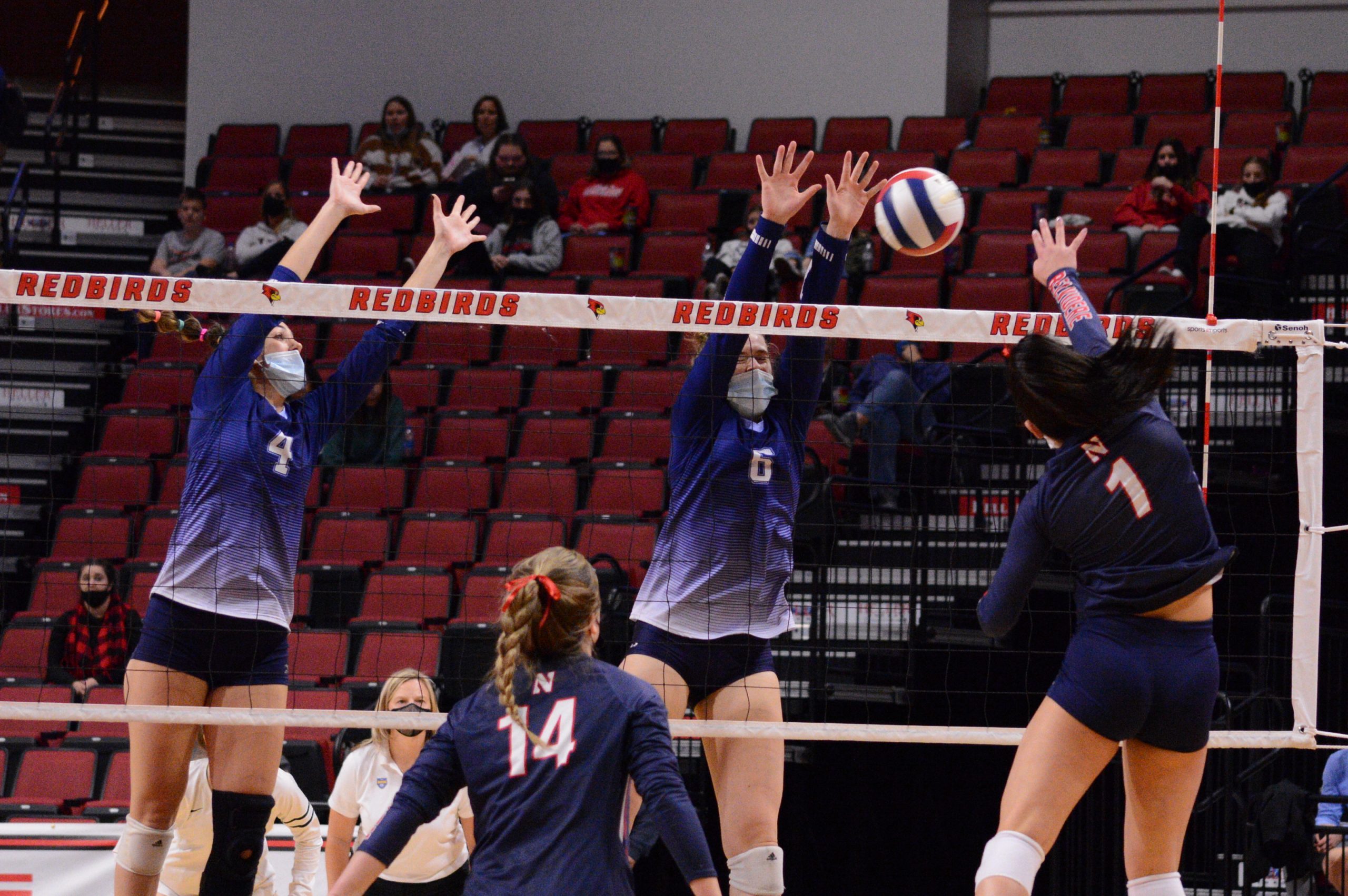 With Nazareth trailing 13-8, Hurta spurred the momentum-shifting run with kills on four of the Roadrunners’ next five points. Her efforts brought Nazareth within one point at 14-13.

“I was really struggling,” she said. “I couldn’t really get a kill and we were just kind of stuck, and that little run helped me regain my confidence and it boosted the team.”

Nazareth regained control, and leading 24-21, Grimes held up one finger to her teammates, indicating match point.

Senior Ivy Schoditsch commented on the season-ending, title-winning point, which came on an attack error by Belvidere North.

“It’s the moment we’ve all been waiting for and working for, so for that to happen was the most amazing feeling,” Schoditsch said. “I’m so grateful for this team, so to be able to share that with them is something I’ll never forget and will always cherish.”

Grimes, Hurta, Schoditsch and junior Katherine Sandt were on the 2019 team that placed third in state for the program’s first state trophy. The experience left them wanting more.

“We came down that year and ever since that day we took third place, we were so excited to make history but we weren’t satisfied,” Schoditsch said.

Grimes was aware the state title is the first for a girls athletics program at Nazareth.

“It’s crazy,” she said. “We made history. Not everyone gets the opportunity to do that and to do it with the best team and my best friends, it’s great.” 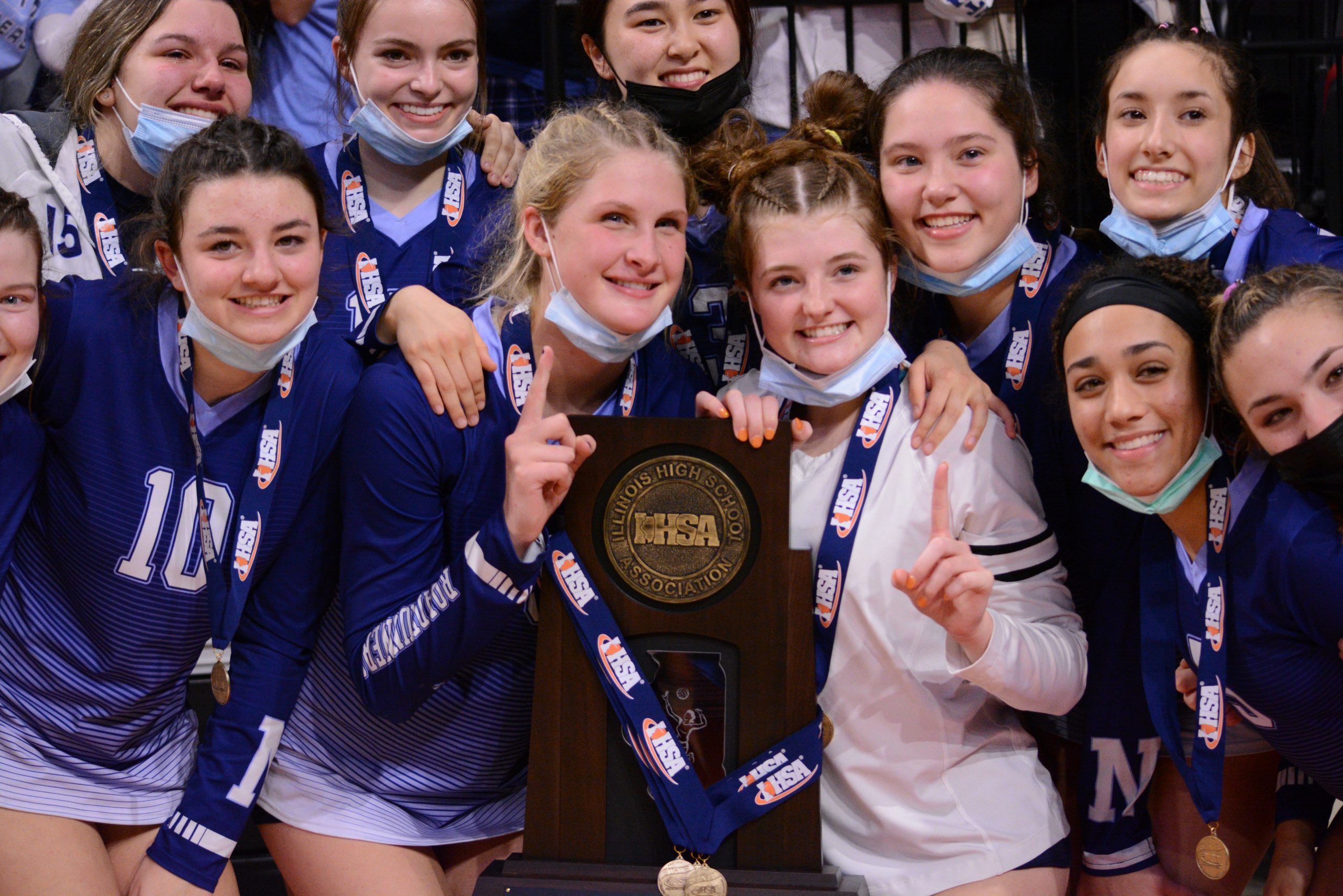