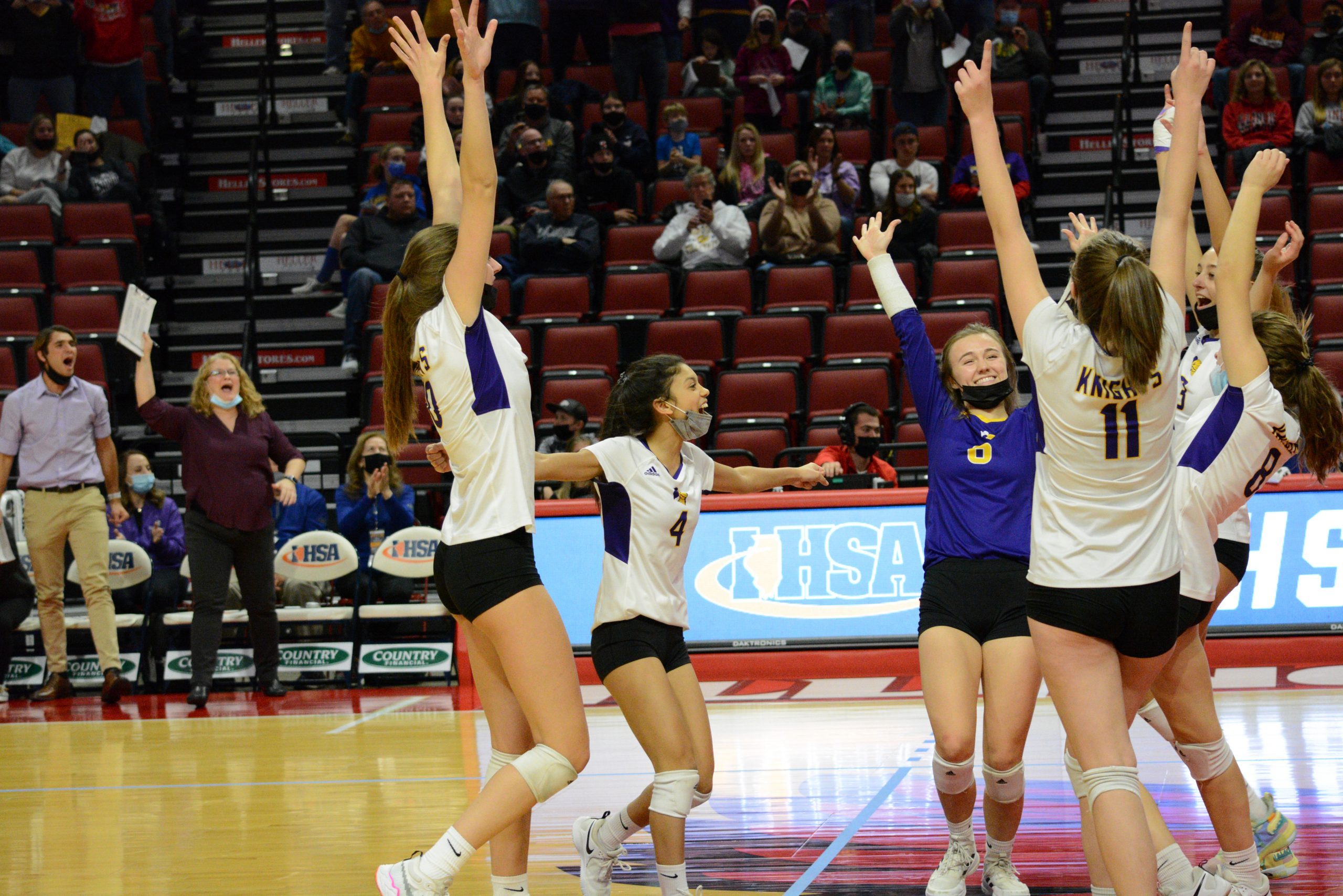 Chicago Christian players and coaches react to the Knights scoring match point in the Class 2A third-place match on Nov. 13 at Redbird Arena. Photo by Jason Maholy

Philosophers and believers in analytics can debate the reality of momentum in the context of having a tangible effect on player performance and the outcomes of athletics competitions.

To many if not most sports fans, players and coaches, there is no question momentum is real.

And it flows both ways.

Chicago Christian found itself on the downward side of momentum during its two-set loss to Pleasant Plains in the IHSA Class 2A semifinals. With their dreams of winning a state championship gone, they had roughly 24 hours to shake that sting before they had to get back on the floor and compete one last time.

They bounced back with a strong showing, defeating fellow losing semifinalist Mater Dei, 25-16, 25-14, to take home the third-place trophy on Nov. 13 at Redbird Arena.

In its semifinal loss, Pleasant Plains scored 18 of the last 28 points in the first set. Then, in a tightly contested second set, the Knights led 21-20 before the Cardinal closed matters on a 5-0 run. 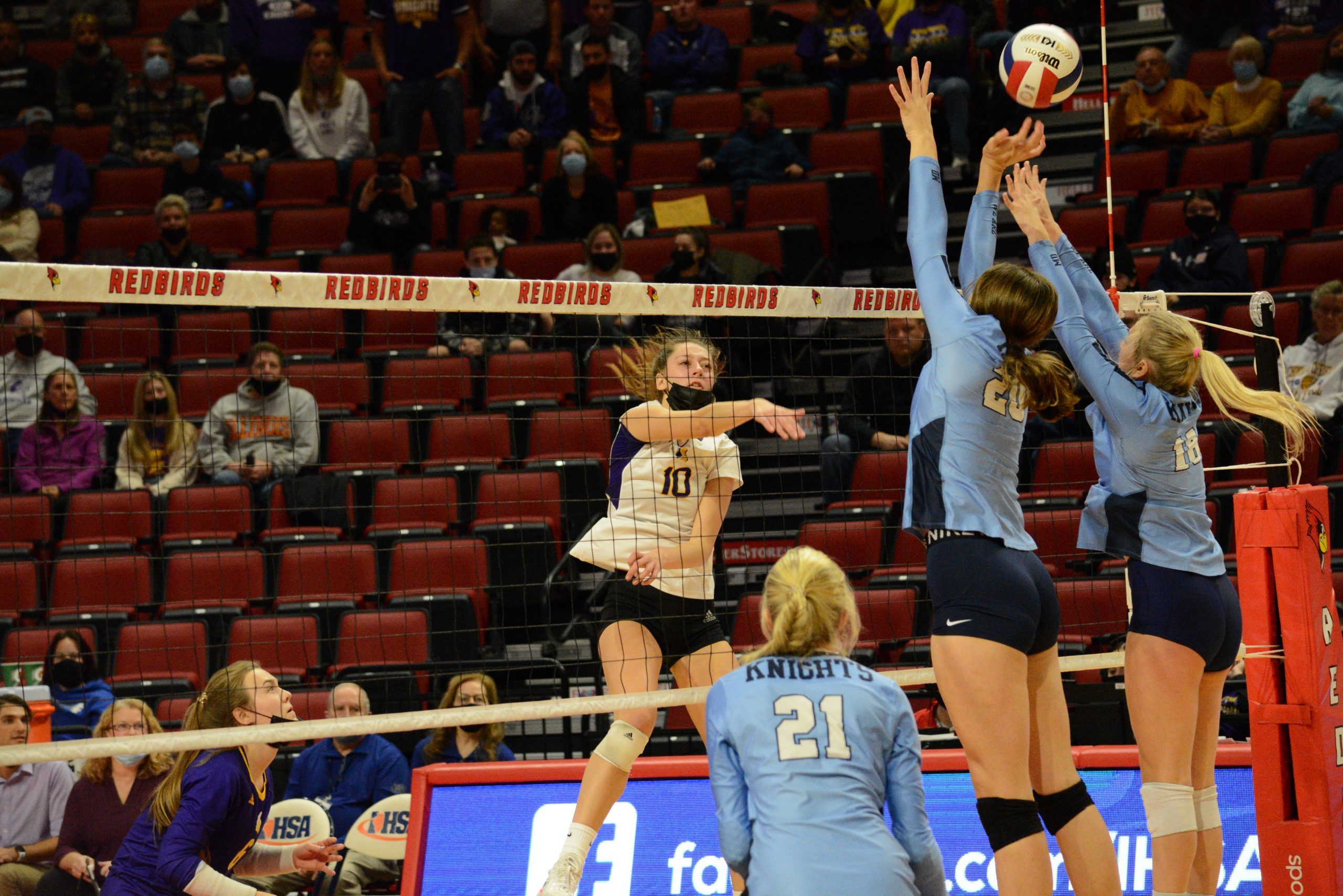 In the third-place match, Chicago Christian came out with energy and scored the first five points, and never led by fewer than four in the first set. In the second, the Knights closed on a 17-6 run and turned an 8-8 game into and 11-point victory.

“Momentum in volleyball is a thing,” Chicago Christian coach Karen Van Assen said afterward. “But, of course, we like it when we’re winning. It’s harder to come back against momentum and work and get those points, but I think it just gave them a little more energy and a little more excitement today. That was the difference.”

Knights senior hitter Logan Grevengoed took the semifinal loss personally. She registered eight attack errors, which matched her kills for the match, as well as two service errors and a receiving error.

“Yesterday was a tough day for me,” she said.

With the loss weighing on her mind, she found some clarity that helped her through the disappointment and to be ready for Saturday’s match.

“I just realized, it’s my last game ever in high school today,” she said. “There’s no reason to be nervous, there’s absolutely no pressure at all, so I just wanted to perform well for my team the last time we were together.”

Grevengoed was not as aggressive as usual in the semifinals.

Junior setter Keely Colyer said that wasn’t the case in the third-place match, in which Grevengoed had eight kills and one attack error.

“I definitely saw a difference,” Colyer said. “Logan wanted the ball. She wanted me to set her up and she wanted to get that kill.” 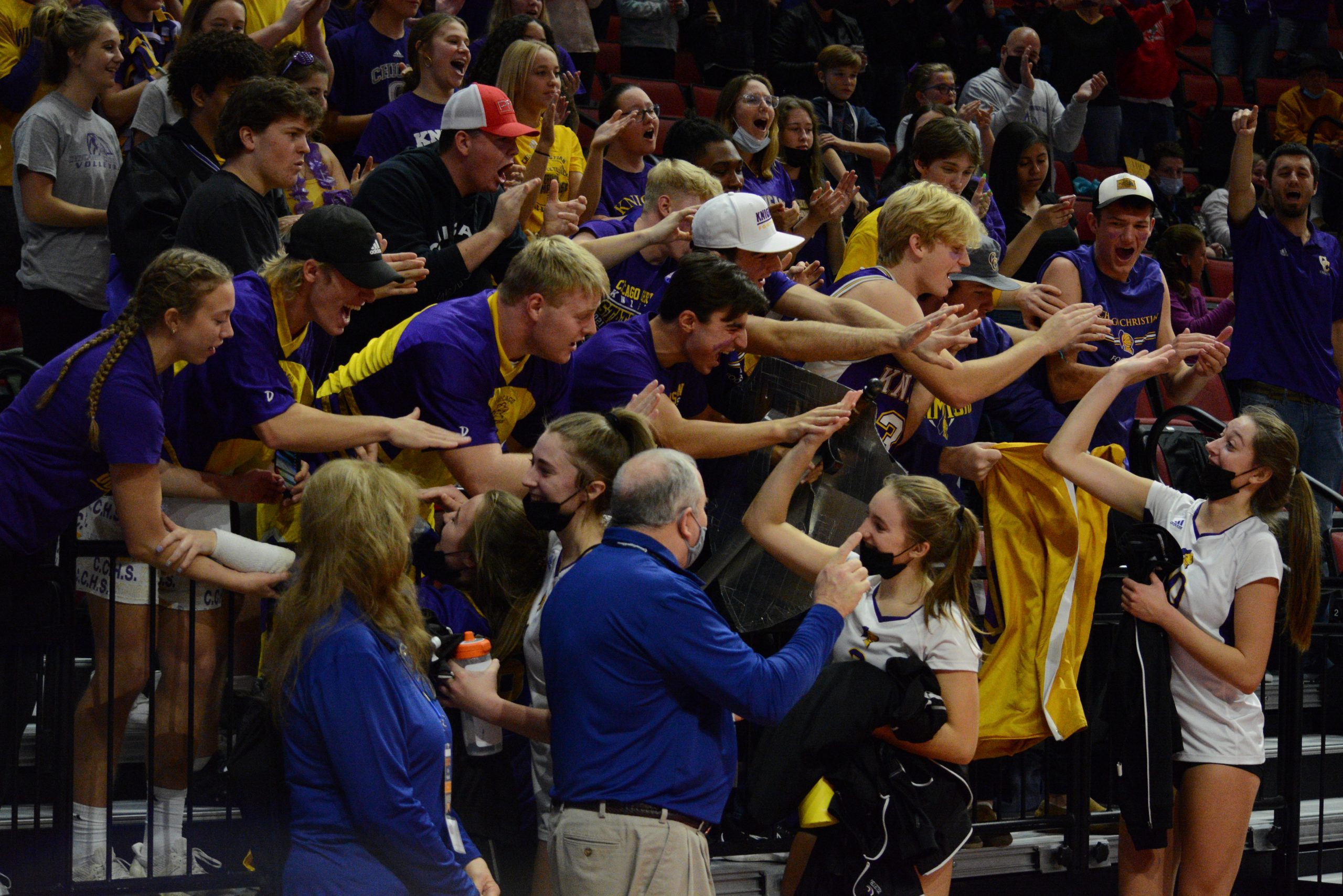 Chicago Christian players celebrate their third-place finish with Knights fans who made the trip to Illinois State University. Photo by Jason Maholy