Brian Badke gives his last postgame speech to Brother Rice’s football team after a loss to Wheaton North on Saturday. He is retiring after this season. Photo by Jeff Vorva 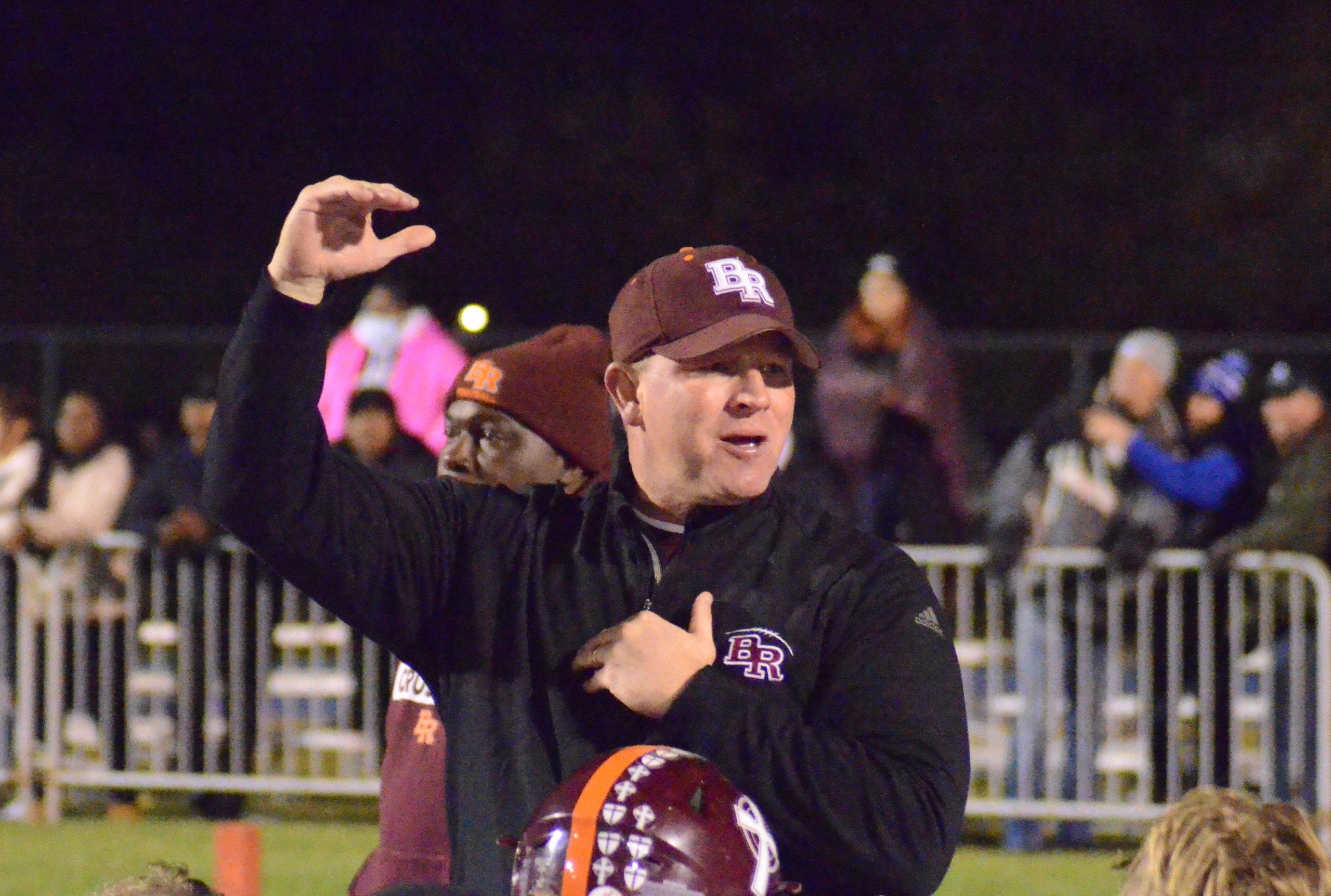 Brian Badke gives his last postgame speech to Brother Rice’s football team after a loss to Wheaton North on Saturday. He is retiring after this season. Photo by Jeff Vorva

At age 47, Brian Badke has a lot of good coaching years left in him.

But for now, he is stepping away and putting the whistle in storage.

He has a lot of good spectating years ahead of him that he wants to take care of, first.

The Brother Rice football coach announced before the season that this will be his last, and his final game was Nov. 20 in a 45-27 loss on the road at Wheaton North in the IHSA Class 7A semifinals.

The Crusaders finished 10-3 and Badke ended a 10-year run at the helm with a 74-41 mark. He said he wants to watch his four children play in their sports for awhile.

“I’ll be a dad and a husband,” said Badke, who is sales rep at Proven IT. “I’m going to miss this a lot. I’ve coached for 24 years and that’s a long time. It’s a new phase in my life. You miss a lot when you are coaching.”

His oldest son, Mick, missed the 2021 season at John Carroll University after ACL surgery. His oldest daughter, Bridget, is on Marist’s competitive cheerleading team at Marist and his other daughter, Elizabeth, is on the RedHawks’ sophomore basketball team. His youngest child, Jack, is a sixth-grader at Christ the King.

Badke and the Crusaders were hoping he could go out on top.

The Crusaders had a powerful offense. Not counting a forfeit win over Perspectives, they scored 40 or more points in seven of their nine wins. 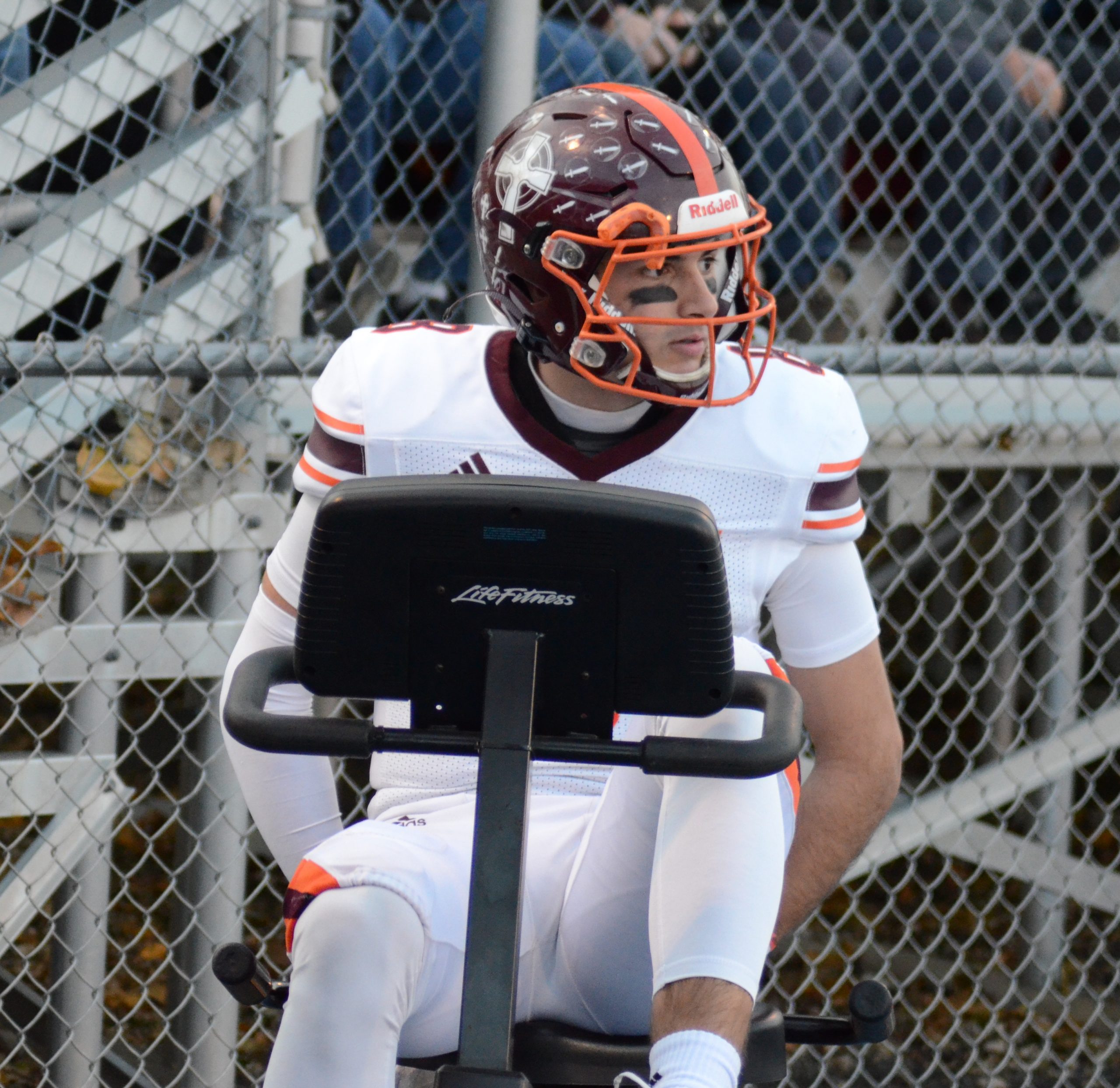 Jack Lausch uses a stationary bike to keep his left leg loose during Saturday’s loss to Wheaton North in the Class 7A semifinals. Photo by Jeff Vorva

The Crusaders’ dual-threat quarterback, Jack Lausch, who is heading to Notre Dame next fall to play football and baseball, sustained a left thigh injury in a quarterfinal victory over Mount Carmel. His ability to play in the semis was questionable, as he could not walk earlier in the week, Badke said.

Lausch did play but was unable to run. He threw for 271 yards and did not have a rushing attempt, despite coming into the game with 1,084 rushing yards. His line protected him as he was not sacked by a strong Wheaton North defense.

“It felt great to play but I wasn’t able to run,” he said. “I can’t thank the trainers enough. We made a lot of progress in a week.”

Running back Aaron Vaughn finished his brief career with the Crusaders with 100 yards and three touchdowns. Vaughn played his first three years at Providence before transferring to Rice this year.

The second of his touchdown came on a 6-yard plunge to pull the Crusader to within 24-21 late in the third quarter, but the Falcons (12-1) responded with three scores and earned the right to face St. Rita for the Class 7A state championship at 4 p.m. Saturday at Huskie Stadium at Northern Illinois University.

That was a spot Badke hoped to be in, but it was a rough day all around for the powerful Chicago Catholic League/East Suburban Catholic Conference Blue division. Marist and Loyola both lost Class 8A games earlier in the day, to Maine South and Lockport, respectively.

“It’s always great to be practicing on Thanksgiving, but Wheaton North has a great defense and we were still able to score some points on them,” Badke said. “We didn’t get the stops we needed.”

* — Finished second in Class 8A 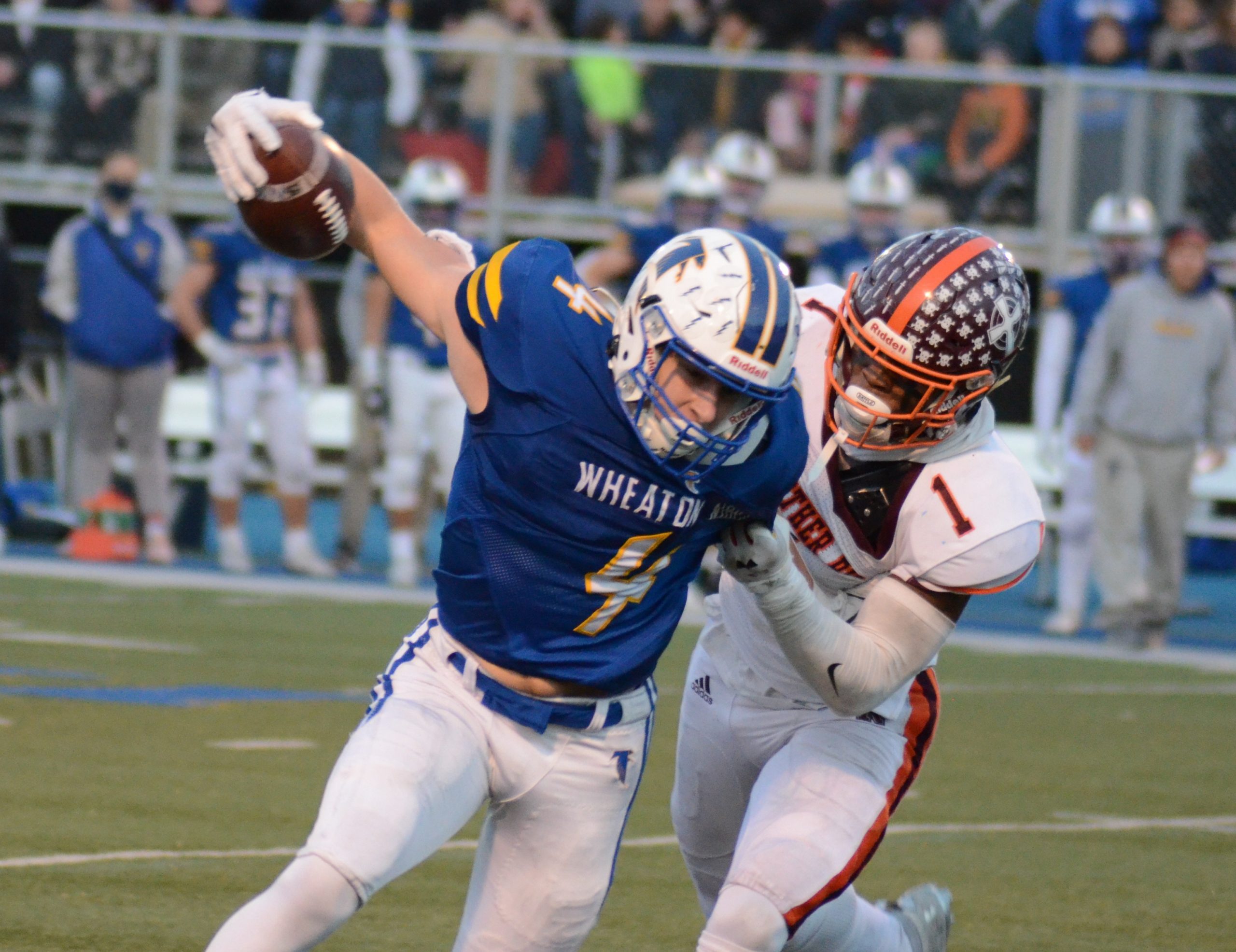