Skip to content
November 24, 2021/Comments Off on Pushback over ‘conscience’ law change

A number of Southwest Siders are pushing back against a new state law designed to clear the way for employers to enforce vaccination, testing and other mitigation measures to prevent the spread of COVID-19. 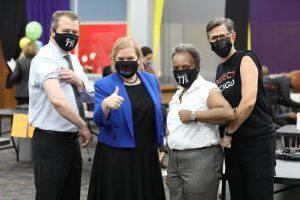 The measure, Senate Bill 1169, amends the Illinois Health Care Right of Conscience Act, a 1977 law originally intended to shield doctors and pharmacists from liability for refusing to participate in abortions.

Gov. JB Pritzker’s office reported that he signed it last week while he was at an overseas trip to Glasgow, Scotland, for the United Nations Climate Change Conference.

The move was hailed by Mayor Lori Lightfoot and others attempting to ensure a fully vaccinated government workforce.

Some others, most notably city police officers and firefighters, saw it differently.

Cathy Ragazzo, whose cousin is one of the 30-plus police officers forced into a no-pay status because he refuses to disclose his vaccination status to the city, called the governor’s action misguided.

“I understand that we need to end this pandemic,” she said. “But it’s clear we’re on our way to doing that. What the state senators and state reps and the governor did was heavy-handed and unnecessary. It makes you wonder what they’re really up to, why they’re trying to control people’s lives like this.”

People who oppose Senate Bill 1169 “are not necessarily anti-vaxers, not the tinfoil-hat crowd,” added Gaylee Wilson, who said she is fully vaccinated against COVID-19. “This is about control; and as a black woman, I’m naturally suspicious of government forcing things on ordinary folks, especially medicine. Give me a choice, and I’ll probably choose vaccination. Force it on me, and I start to ask why you’re doing that.”

The most strident opposition came from Fraternal Order of Police Lodge 7 President John Catanzara, a Southwest Sider. On Monday, he said his ongoing fight with the Lightfoot Administration over vaccine mandates and other issues has reached a “plant your flag and defend your ground or surrender…Today, the flag is planted! The battle for the soul of this city starts today!”

‘Conscience’ law about abortion, not vax

Illinois was one of several states to enact such a law in the wake of the 1973 U.S. Supreme Court decision in Roe v. Wade. Federal law also provides similar protections.

In recent months, though, that law has been used by individuals in Illinois to block employer mandates that certain workers receive COVID-19 vaccines, disclose their vaccination status or undergo regular COVID-19 testing as a condition of employment.

In some cases, those plaintiffs have been successful in obtaining restraining orders against such mandates, including a group of nurses in Kanakee who objected last month to a local hospital’s vaccine mandate.

The new law, which becomes effective June 1, makes an exception to the Health Care Right of Conscience Act by saying it is not a violation of the act for an employer to impose or enforce any requirements “that involve provision of services by a physician or health care personnel intended to prevent contraction or transmission of COVID-19 or any pathogens that result in COVID-19 or any of its subsequent iterations.”

“Masks, vaccines, and testing requirements are life-saving measures that keep our workplaces and communities safe,” Pritzker said in a statement after signing the bill. “Keeping workplaces safe is a high priority, and I applaud the General Assembly for ensuring that the Health Care Right of Conscience Act is no longer wrongly used against institutions who are putting safety and science first.”

The bill was the subject of intense debate during the General Assembly’s fall veto session last month. More than 50,000 individuals and groups filed witness slips in opposition to various iterations of the bill, including the Chicago Police Department, Chicago Public Schools and an individual who described himself as “Wants freedoms back.”

Only about 1,000 people filed slips supporting the various amendments to the bill. Among those were Attorney General Kwame Raoul, the Illinois Health and Hospital Association, a number of state universities, the governor’s office and one individual who identified herself as “Not a crazy science denier.”

The bill passed the House Oct. 27 by a vote of 64-52. It passed the Senate the following day, 31-24. Because the votes took place after May 31, and because it did not pass both chambers by at least a three-fifths majority, under the Illinois Constitution the new law cannot take effect until June 1, 2022, unless lawmakers come back and pass an identical bill during the 2022 session, which begins in January.

Critics of the bill argued that it would violate individual religious freedoms by taking away their right to refuse certain medical treatments that they find morally or religiously objectionable while others argued that individual health care decisions should be a matter of personal choice.

Supporters, however, countered that individuals still have protections under federal law, pointing to a provision of the bill that says, “Nothing in this Section is intended to affect any right or remedy under federal law.”

But even the federal conscience statute, known as the “Church Amendment” – named after its sponsor, former U.S. Sen. Frank Church, D-Idaho – may not extend to shielding individuals from COVID-19 mandates.

Last week, a federal judge in Fort Worth, Texas, ruled in favor of Chicago-based United Airlines by refusing to block that company’s policy of placing unvaccinated employees on indefinite unpaid leave, even if they qualify for a religious or medical exemption.

In his opinion, U.S. District Judge Mark T. Pittman did not rule on whether United’s policy violated U.S. law or the U.S. Constitution. He said only that the plaintiffs in that case had failed to prove that they would suffer “irreparable injury” without a preliminary injunction to block the policy while the case proceeds.

In a statement Tuesday night, Annie Thompson, a spokesperson for Raoul, echoed the governor’s statement.

“The Attorney General’s office is defending the state against an ever-increasing number of lawsuits filed by individuals who refuse to follow public health guidelines and believe that the state’s measures to mitigate the spread of COVID-19 should not apply to them,” she said in the statement. “This litigation could impact hundreds of thousands of teachers, state and local employees across Illinois, and recent court filings have relied on misinterpretations of the Health Care Right of Conscience Act, demonstrating a need for clarification. The General Assembly’s action to clarify its intent when passing the law will help ensure it is not misinterpreted or misapplied in ways the Legislature did not intend.”