Skip to content
December 3, 2021/Comments Off on Lyons dedicates memorial to firefighters on 125th anniversary

The more than 500 men and women – many of them volunteers – who have worked for the Lyons Fire Department over the past 125 years will not be forgotten.

A red-brick memorial topped with a firefighter’s helmet and sitting outside the fire station, 4043 Joliet Ave., was dedicated on Nov. 28. About 200 attended. 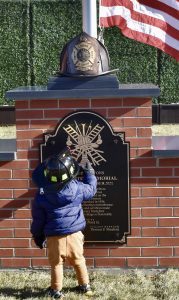 Cash Parker Williams, 2, of Lyons, checks out the new firefighter memorial outside the fire station before the dedication ceremony.

Behind the memorial stands a new 35-foot flagpole topped with a 6-by-10-foot American flag.

Mayor Christopher Getty said the memorial pays tribute “to all those past and present who helped create and shape the great organization of the Lyons Fire Department into what it is today.”

In a nod to the past, the names of each of the department’s 18 fire chiefs from 1896 to today were read out loud.

A family member, current or former village official, or a special guest placed a white carnation atop the memorial for each name read.

Regarding the present, Getty noted many recent improvements to the fire department

The old pump house was demolished in 2018 to create room for a needed parking lot.

Since 2019, a new fire engine and new fire utility vehicle have been purchased. “Both top-of-the-line pieces of equipment to handle any emergency that may arise,” Getty said.

The fire station has a new roof, and a new HVAC system. Tuckpointing has been done. New all-glass doors will soon be installed on the front of the station, offering passersby a view of fire vehicles.

Village Manager Thomas Sheahan noted how things have changed since the department was established on Jan. 1, 1896.

Sheahan noted there was no telephone, radio or internet. The fire station was heated by a wood-burning stove. Fire trucks were horse-drawn. Water was disbursed by firefighters using a hand pump.

“I want to thank our great firefighters, especially Chief Nord, for their dedication to their profession,” Sheahan said. “When you pass this beautiful moment, please keep them in your prayers.”

With 24 years as chief, Nord is second in longevity only to James Spolar.

“He was the first chief that I had the honor of working for,” Nord said. “Jim was an old-school fire chief who moved the department forward. He was important to us.”

His voice choking with emotion several times, Nord thanked residents and former firefighters who attended on a chilly day.

“I asked for 80 degrees and sunny. I guess I only got the sun,” he quipped

The memorial, Nord said, is for all those “who see the unthinkable, witness the destruction of fire, face life and death situations on a regular basis, spend holidays away from their families, and are always on call, ready to serve at a moment’s notice.”

At the end of the ceremony, Lyons resident Carol Adamski presented a donation to the fire department from the family of former fire chief Robert Buonauro, who died in November.

Eddie Wilkowski, who heads the Lyons McCook Business Association, presented a donation of $1,250 from the membership.

Getty then presented Nord with an artist’s drawing of the chief that will be displayed at the fire station “so that Gordy is not forgotten.”

“This man has a heart bigger than this monument,” Getty said. “He really cares not only about the men, the residents, the businesses, (but) the community as a whole.”