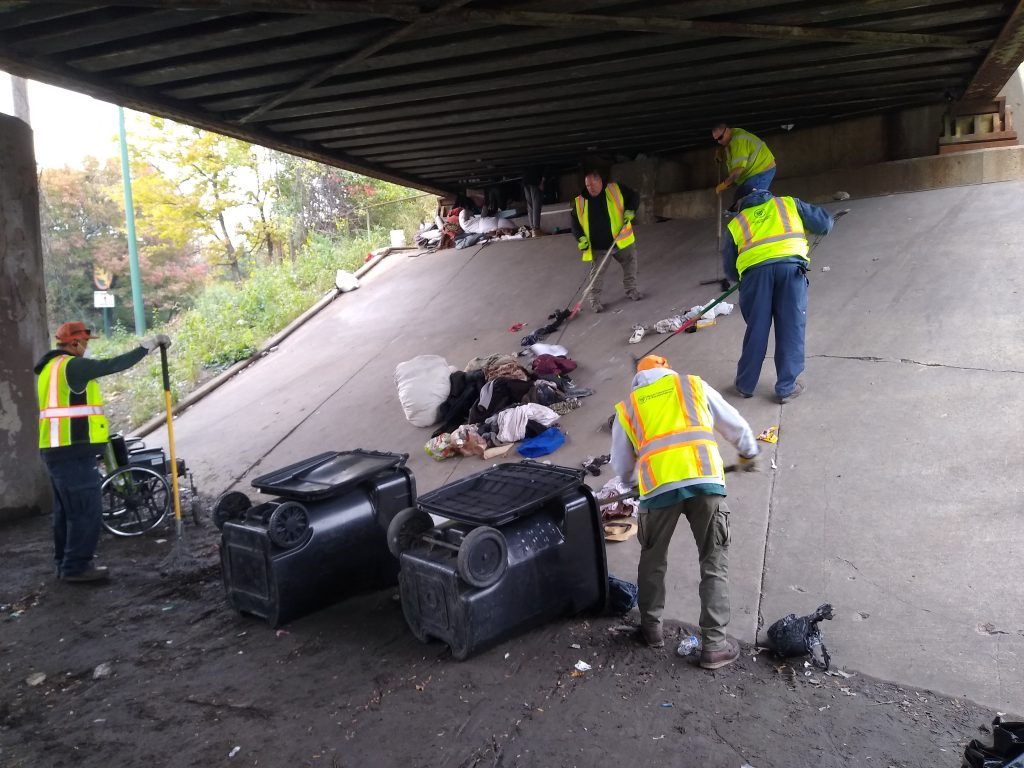 Chicago Department of Streets and Sanitation workers clean up waste generated by squatters under the Cicero Avenue overpass at the Stevenson Expressway. --Supplied photo

Back in July, when neighborhood advocates succeeded in pressuring city and state officials to clean up years of filth under and around the Stevenson Expressway overpass at Cicero Avenue, they warned that unless the area were fenced off, the problem would return.

In the absence of fencing or any other kind of barrier, most of the squatters living on the concrete ledges under the overpass came back. 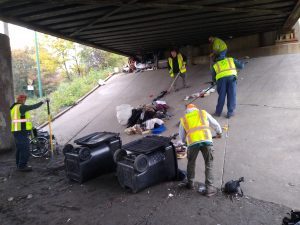 Chicago Department of Streets and Sanitation workers clean up waste generated by squatters under the Cicero Avenue overpass at the Stevenson Expressway. –Supplied photo

They brought clutter, and they generated food waste and other litter, as well as urine and feces since there are no toilet facilities nearby. That, in turn, has led to a resurgence of rats and other vermin.

“Well, here we go again,” said Archer Heights Civic Association President Thomas S. Baliga, whose persistence led to the July 26 cleanup, as well as a second one last month. “We warned about this, but [the Pritzker and Lightfoot Administration officials] turned a deaf ear.”

Since by Illinois Department of Transportation estimates, approximately 35,000
to 40,000 vehicles pass through the intersection
daily,the squalor is seen by large numbers of people every day: Southwest Side residents making local trips, commuters headed to and work, as well as senior corporate officers who have the authority to recommend Chicago as a good investment city, and tourists heading to and from Midway International Airport.

The November cleanup was similar to the one last summer: officials rousted the dozen or so men and women who had been living on concrete ledges, as City of Chicago human services officials—as well as the non-profit Affordable Housing Recovery–offered them housing options and services to address drug and alcohol additions.

Baliga praised the efforts of the frontline government workers at the scene, but was sharply critical of decision makers in both the Pritzker and Lightfoot Administrations.

“Turning a blind eye to this kind of situation is unacceptable,” he said. “The governor and mayor need to stop playing ames and get serious about this.”

At last month’s cleanup, Baliga showed workers a cellphone photo that had been shared with him by a local motorist. Pictured was the body of a 39-year-old woman, her head bloodied, lying face down on one of the steep concrete embankments.

Her death last July spurred Baliga and others to demand a cleanup and a permanent solution to the encampment.

“Nothing we do can bring her back,” he told the Greater Southwest News-Herald. “But we are using her tragic death as a red flag to wave in the faces of government officials. We are trying to prevent this from happening again. The squatters here are in conditions that are dangerous and inhumane. They are vulnerable to crime, to drug overdoses, to disease from rat bites, to the elements and more.”

Even more tragic, he added, “is the fact that some of the squatters are veterans. “It’s absolutely disgraceful that these vets are being enabled to live in such a filthy environment.”

He said city and state officials “need to get them out of here and into safe housing, drug and alcohol recovery, and stable employment All of that is available. We don’t want to back here in January or February, watching an ambulance take away the body of someone who died from exposure, from hypothermia.”

He also demanded the area be fenced off securely. That has not occurred yet.

Generally agreeing with the demands were Archer Heights and Vittum Park contacted by the Greater Southwest News-Herald.

“We have a billionaire governor and a mayor with all kinds of power,” said Maya Oloroso. “They have the ability to get those people out of there and into safe conditions. It’s shameful that they don’t. They may have the brains to lead, but apparently they don’t have the heart.”

Kevin O’Connell said when his relatives visit from out of town and he wants to show them the Loop and its attractions, he avoids Cicero Avenue.

“It’s an embarrassment over there,” he said, “and though I-55 and Cicero is the quickest way for me to drive downtown, I’ll use the ramps at Pulaski or Harlem when I have friends or relatives in my car. I don’t need any more comments from them about how I need to move away from Chicago.”

Ceci Velasquez admitted that she has sometimes given cash or fast food to beggars at the Cicero Avenue overpass, “but it’s a tough situation. I want to help [the squatters], but I personally don’t have a place for them to live or a job to offer them. But I know that those resources are out there. Why these politicians aren’t helping, I don’t know. Wish I did.”