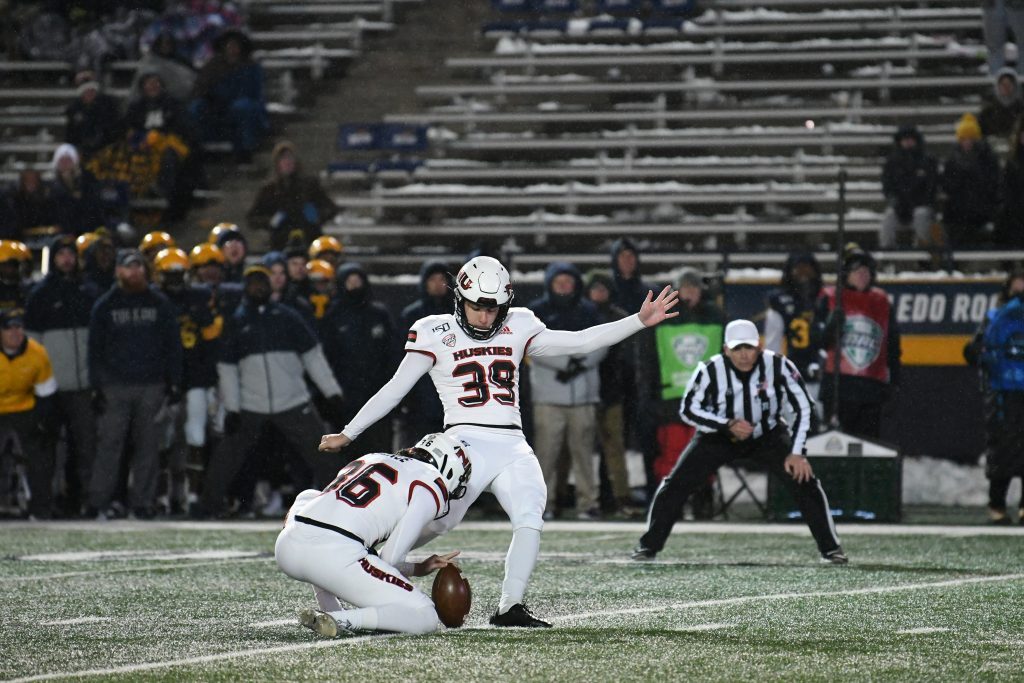 Orland Park's John Richardson is one of several Brother Rice football players on teams who are in bowl games. Photo by Lon Horwedel

Brother Rice graduates are dotting several college football rosters during this bowl season, which got started on a wild note with a former Crusader in the middle of the action.

John Richardson, a redshirt sophomore kicker from Orland Park, booted two field goals and five extra points for Northern Illinois in a 47-41 loss to Coastal Carolina in the Cure Bowl on Dec. 17.

Also on the first day of the bowls, former Rice running back Willie Shaw was on Toledo’s roster for the Bahama Bowl.

The next day, two former Crusader standouts, Justin Jefferson and Dylan Summers, were on Eastern Michigan’s roster for the Lending Tree Bowl.

Xazavian Vallady and his Wyoming teammates were scheduled to play Kent State in the Idaho Potato Bowl on Dec. 21.

Jack DeJarld is on Miami (Ohio), which plays in the Frisco Classic Thursday against North Texas.

Giacomo Iraci plays for Western Michigan’s, which will battle Nevada in the Quick Lane Bowl on Dec. 27.

Pat Parrilli, who is in the coaching world, is an assistant at Wake Forest, which takes on Texas A&M in the Taxslayer Bowl on Dec. 31.

She lived up to the award on Dec. 18 night, pounding 11 kills and racking up 13 blocks in a five-set victory over Nebraska to help the Badgers (31-3) win the NCAA National Championship.

Rettke was granted and extra year of eligibility because of COVID-19 and she was able to earn a fifth All-American designation by AVCA.

Coming back for the extra year was worth it.

“Oh, my God, I cannot believe it,” she said in an ESPN interview moments after the national championship. “I’m just so proud of this team and how we battled. Wow!

“It’s so incredibly special. This is what I came back for a fifth year for.”

NA-IOW-A
SXU’s football team was eliminated in the first round of the NAIA Football Championship Series in November.

For those interested, Morningside beat Grand View, 38-28, Saturday in the championship in Durham, N.C.

It was an all-Iowa tilt for the title, and the first time in 66 years two teams from the same state met in the finals.