Parisi’s Drive-In, 6216 W. 63rd St., has closed a couple of times in recent years, only to reopen within a short time.

The popular fast-food restaurant closed about a month ago and this time it appears to be for good. 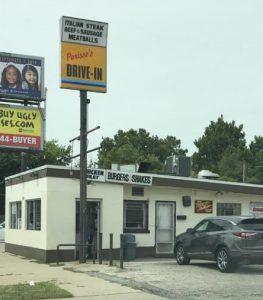 The Parisi’s building and grounds have stood largely unchanged for decades. –Supplied photo

“There is unconfirmed word that it will become an Asian restaurant,” said Mary Ellen Brown, president of the Garfield Ridge Chamber of Commerce.

She said the building is still owned by Nghia Nguyen, owner of Elegant Nails Salon across the street, who bought the business and building from its longtime owners in 2017.

At the time of the sale, longtime manager Rick Lunt said the new owner wanted to stay behind the scenes. Lunt had been working at the restaurant since 1971.

The popular drive-in had reportedly been open for 67 years and was famous for its beef and breaded steak sandwiches, fries and milk shakes.

Old-timers often wax nostalgic about buying soakers (Italian bread dunked in red sauce) for a nickel, back in the 1960s. Their pepper-and-egg sandwiches were highly popular during Lent. In the summer, lines at Parisi’s often stretched down the street, as people clamored for their ice cream.

One local restaurant worker told the Clear-Ridge Reporter & NewsHound that a Parisi’s worker applied for a job with them and claimed he had not gotten paid recently.