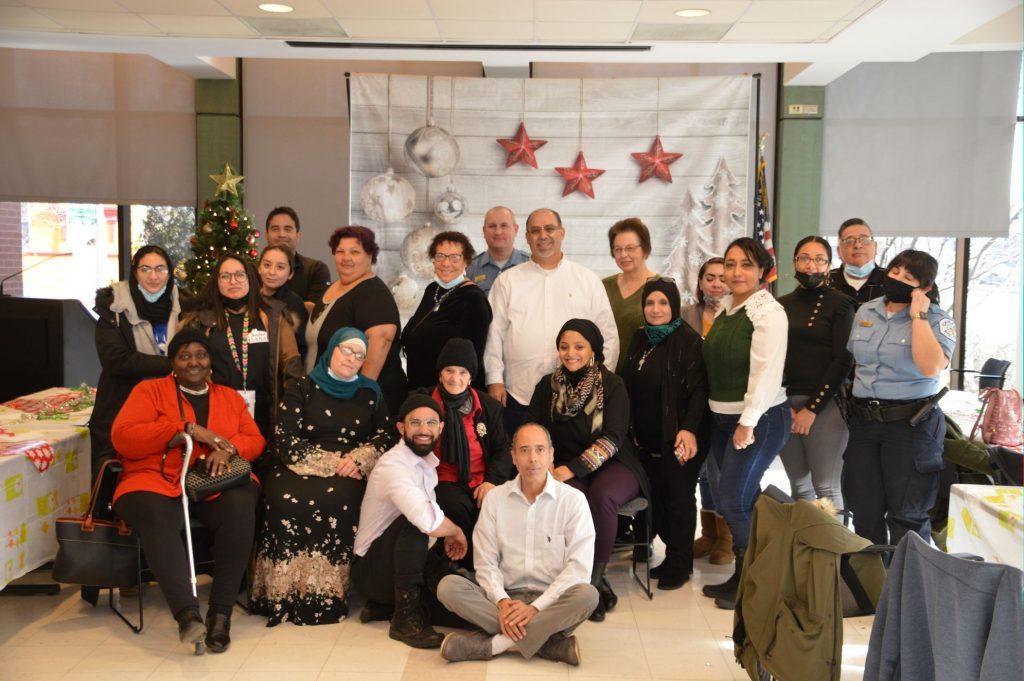 Last Friday I was happy to be invited to a holiday party for members and friends of the International Human Relations Council and Sanad. It was held in the community room of the Chicago Lawn (8th) District Police Station. 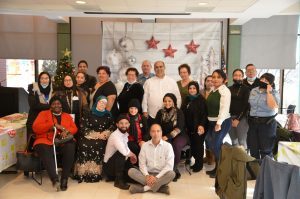 Those celebrating at the holiday party at the Chicago Lawn (8th) District Police Station pause for a photo. –Photo by Ronald Brown

Hassan Nijem is Honorary Cook County Deputy Treasurer, as well as, a member of the Arab American Chamber of Commerce. During his welcoming statements, I was surprised to learn that he, as well as several others at the party, is from Bethlehem. It just never occurred to me before that this was the case, and it was kind of nice to learn that as we talked about Christmas and the holiday season.

The diverse group gathered at the party on Friday have all met at some point over the years thanks to Fatima Abu Eid, founder of Sanad, and her belief that building bridges is the way to fight hatred and bring peace.

I’m glad I’ve gotten to know this group so much better this year. Until now, I never realized how much their presence has meant to the neighborhood over the past 33 years.

So here it is, Christmas week. I don’t know about you, but I seem to still be raking leaves. As I look out the window, at these huge wind gusts, the leaves blow north from the park and then back again south. For some reason they like to hang around my house though. Eventually we will most likely get some snow. It will cover whatever might be left of the leaves – but I will know they are under there, waiting for me in the spring.

I drove by the Gaynor Building the other day. It looks like it might be torn down soon. Feel free to correct me if I am wrong, but wasn’t the second floor of that building home to Western Recreation a long time ago? I know Fannie May was in the corner shop on the first floor for awhile, and I believe Shapiro Shoes was in the building on the south end.

If you are interested in fitting in some exercise, a New Year’s resolution free Zumba event will be held at the Monarca Event Room, 3300 W. 63rd St., at 6 p.m. Monday, Dec. 27. This will be hosted by No More Fear Coaching.

As you may remember, the Sip & Taste is coming up in the event room at Monarca on Wednesday, Dec. 29, from 4 to 9 p.m. Featured will be margaritas, palomas, vampiros and coquitos. The idea, as you may have figured, is to try it before you buy it. To get a ticket ahead of time go to eventbrite.com/e/sip-taste-tickets-217284843817?aff=eand.

Now back to 1971. Last week I left you with a question concerning a 65th birthday party that was planned for a businessman in the Marquette Manor shopping area on Western Avenue. I thought the clue that he opened his place of business at 66th and Western after retiring from his first career would have been the clincher on this one. Joe P. was the first to answer with Tony Piet but he said it was the baseball hint that sealed the deal for him.

Now that we are right at Christmas, I guess we should be shopping for Christmas dinner. Fifty years ago this week, I think a good place to go would be at 2454 W. 63rd St. They advertised turkeys for 29 cents a pound, geese for 89 and ducklings for 53, as well as, 3 cans of Queen of Scot olives for $1 and Scot Lad cans of pop for 10 cents. Where do you think we will be shopping?

Throughout this week there will be Christmas ads and greetings from the past on the Chicago Lawn Historical Society Facebook page. Check it out when you have time. Wishing you all a very Merry Christmas!