January 9, 2022/Comments Off on College Report: Division I schools listening to Heard

Tadriana Heard is ready for a second round of Division I basketball.

The former Argo star is playing her second season for Morton College, and heading into this week’s action was first in the nation among National Junior College Athletic Association players with 64 3-pointers. She was also 10th in points scored with 258 as she has helped the Panthers to a 13-2 record.

Heard, of Justice, had 14 points, three rebounds, four assists and three steals in last Morton’s 99-43 victory over Moraine Valley on Jan. 6 in Palos Hills. The 5-foot-10 guard played a year of NCAA DI ball at Wisconsin-Milwaukee.

That didn’t turn out to be a good fit for her, so she came home and was hoping to land a spot at Moraine.

That didn’t happen because the school elected to cancel the basketball season due to COVID-19 concerns, so she headed a little further north to Morton and coach Jason Nichols, who had a wildly successful high school career coaching at Trinity and Montini.

Now that Heard is thriving, Division I schools are taking notice.

“She does it all – what’s not to like about her game?’’ Nichols said.

Heard has had interest from Midwest schools including Loyola, Illinois-Chicago and Valparaiso. She is hoping that this time around, she can enjoy success at that level.

“Coach Nichols is really pushing me hard, and I think that’s going to be good for my career,” she said. “I still always need to work on conditioning and getting to the basket and making the right play.”

Also helping the Panthers from the area are Nazareth grads Jovanna Martinucci and Franchesca Metz.

Morton’s men pulled off an 84-70 victory over the Cyclones and used 13 3-pointers, including seven from Lockport grad Matas Deksnys. Moraine could muster just three treys. 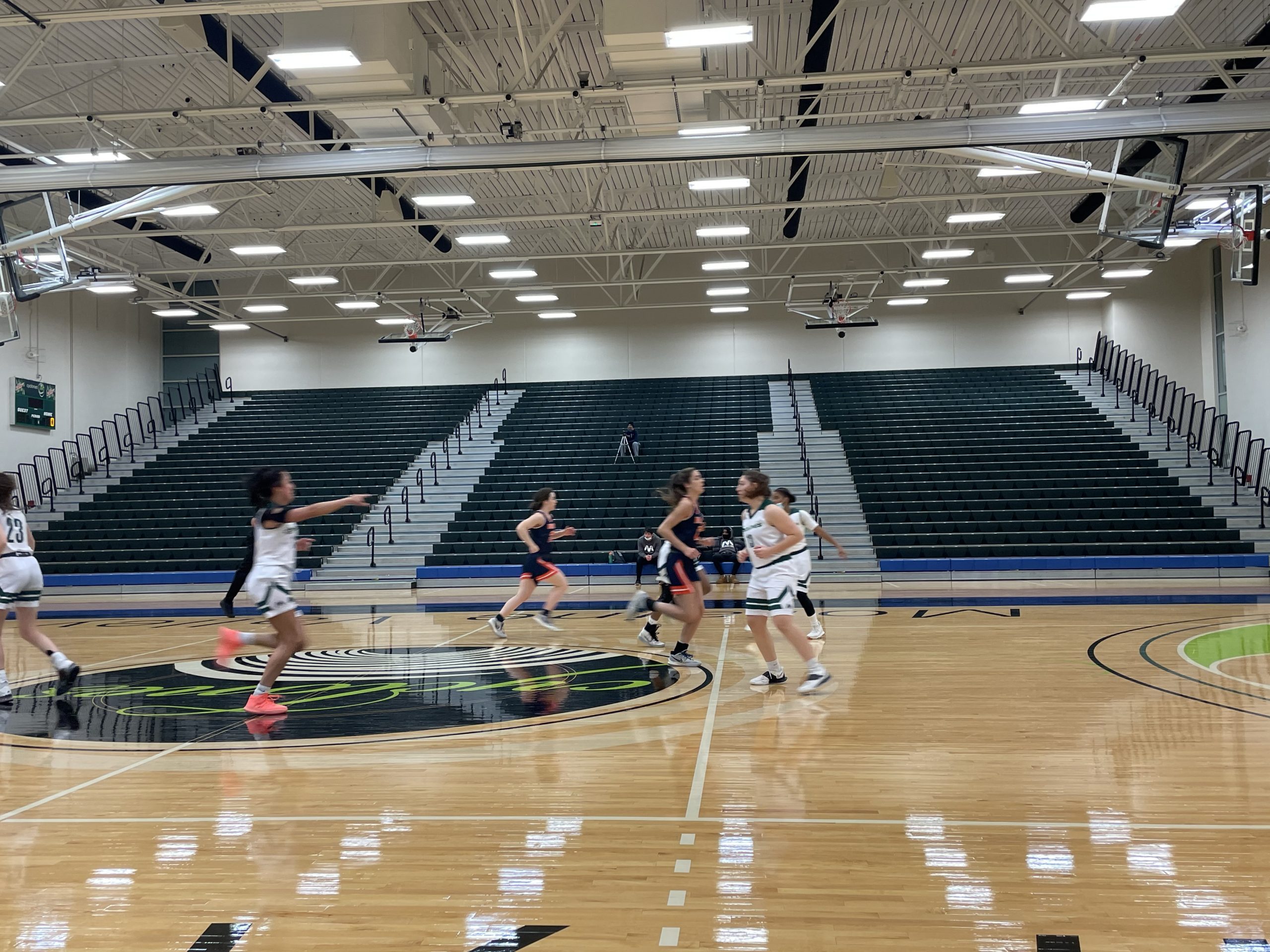 A student running video and a few men’s basketball players watched the Morton-Moraine women’s game Thursday in Palos Hills. Spectators were not allowed at the games because of COVID-19 concerns. Photo by Jeff Vorva

The Morton doubleheader was played without fans in the stands because of COVID-19 concerns. That was the bad news, but for the athletes, it beat last year’s decision to stop the winter sports altogether during the pandemic.

National Title for Patterson
Solorio grad Quincy Patterson was a red-hot quarterback prospect with the ability to throw and run.

Things didn’t work out in two seasons at Virginia Tech, so he transferred to North Dakota State and helped the Bison win the NCAA Division I (formerly I-AA) Football Championship on Jan. 8 with a 38-10 victory over Montana State at Toyota Stadium in Frisco, Texas.

Patterson shares signal-calling duties with Cam Miller and during his time on the field rushed 11 times for 98 yards.

It was the ninth national championship in the last 11 seasons for the Bison. 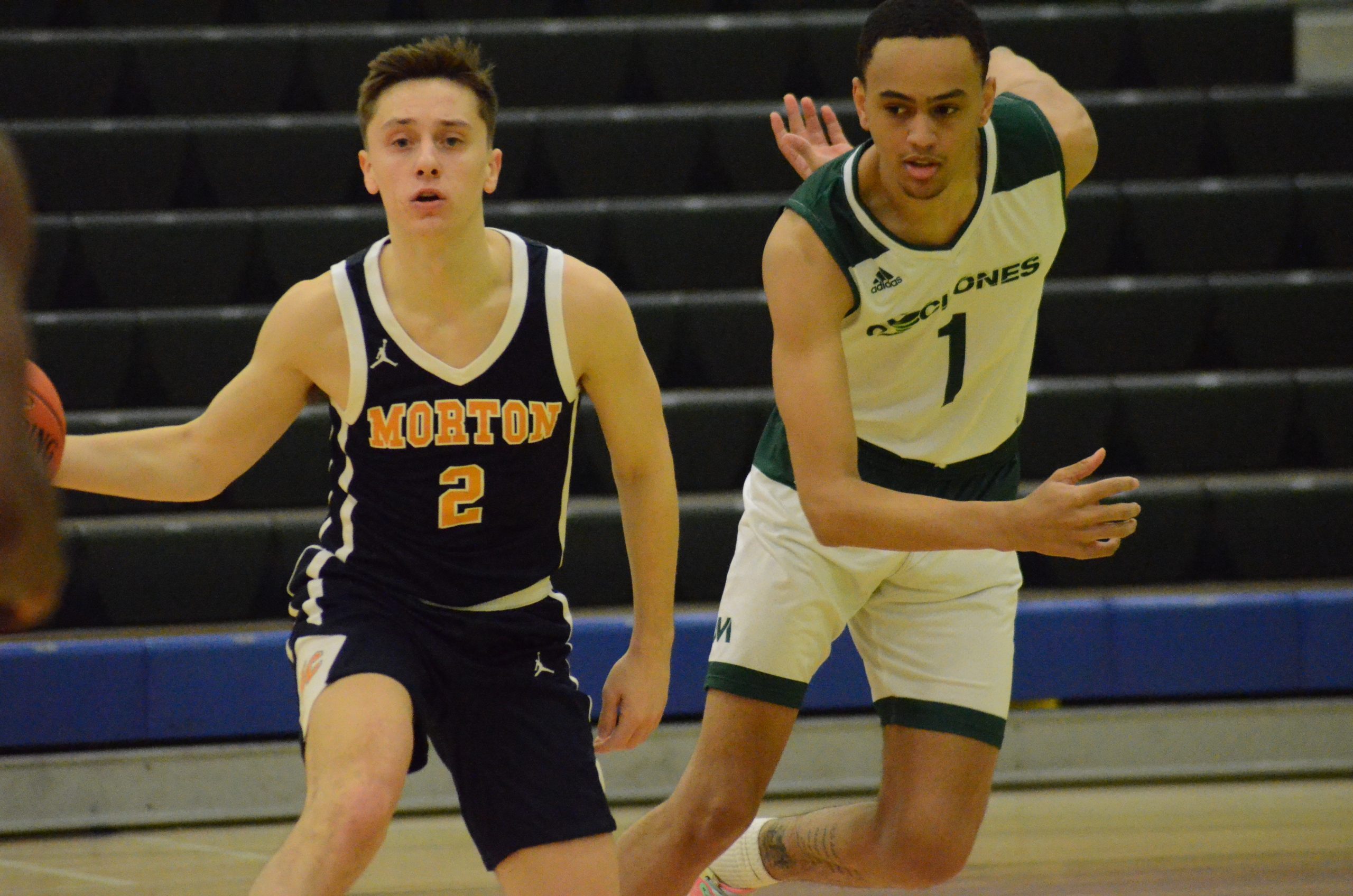 By Dermot Connolly The United Business Association of Midway has partnered with Hale School to expand the community garden outside the school at 6140 S. Melvina. “I have always believed that a strong partnership is what gets anything accomplished,” said Anita Cummings, UBAM executive director. “This is a cornerstone of our organization. We work with…

By Joan Hadac There are all kinds of fundraisers that benefit Special Olympics Illinois, but none is faster than the Five-O at the Dirty-O, the annual stock car race at the famed Dirt Oval 66 racetrack (known to fans as the Dirty-O) in Joliet. Five-O at the Dirty-O is a charity race featuring law enforcement officers…

Garfield Ridge is expected to be awash in red, white and blue on Thursday, June 30, as the Garfield Ridge Chamber of Commerce’s annual Patriot’s Day Parade is scheduled to step off at 7 p.m. from Archer and Central, heading west and ending at Kennedy High School. All Clearing and Garfield Ridge residents are welcome…