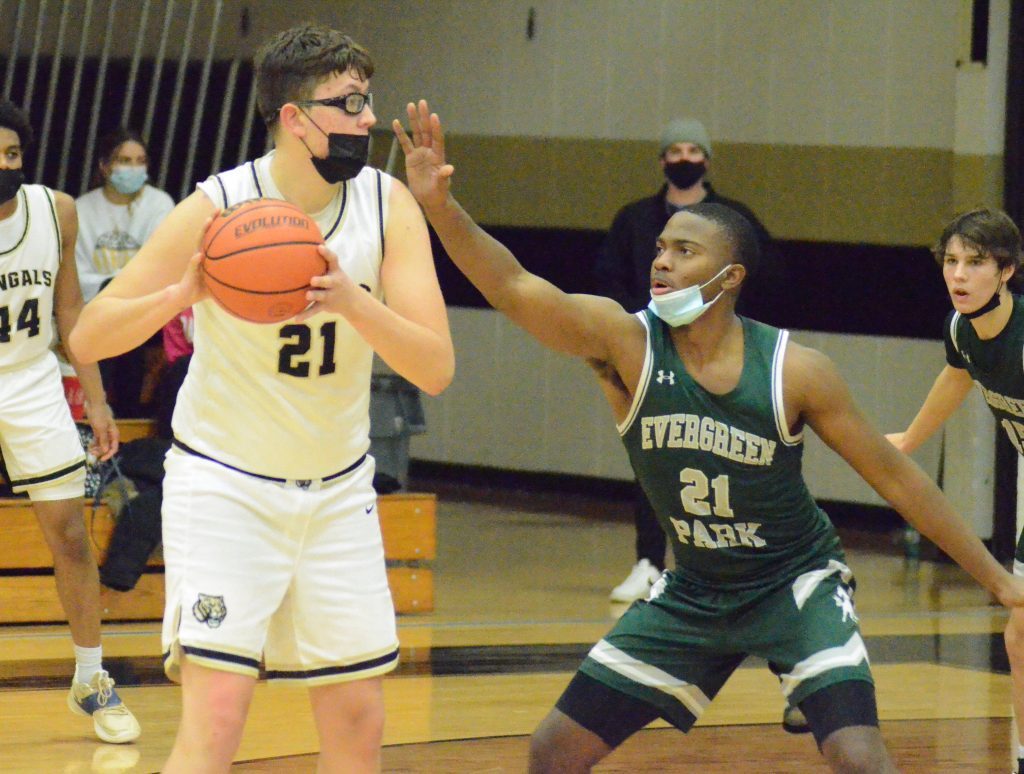 The Mustangs took a rollercoaster ride.

In a nutshell: They started the season with four consecutive wins, lost the next three, won five straight and then dropped three in a row.

The latest three-game losing streak was painful as they dropped a tight 58-57 decision to Hoffman Estates in the Immaculate Conception tournament on a last-second layup on Dec. 30. That was followed by a pair of South Suburban Conference crossover road losses to Lemont (84-57) on Jan. 4 and Oak Forest (72-41) on Jan. 7.

Heading into this week’s action, Hoffman Estates, Lemont and Oak Forest had a combined 34-10 record, so it’s not like the Mustangs were losing to cupcakes. But the Mustangs want to stop the bleeding and stop it quickly. Unfortunately for them, the bandages may stay in storage for another week.

The Mustangs were scheduled to end the crossover portion of their conference schedule on Tuesday, when they hosted arguably the best of the 14 SCC teams in Hillcrest (13-2, with one loss being a 51-48 setback to Glenbard West, the AP’s No. 1 Class 4A team in Illinois). On Thursday night, the Mustangs open the South Suburban Red season against Oak Lawn (11-4). 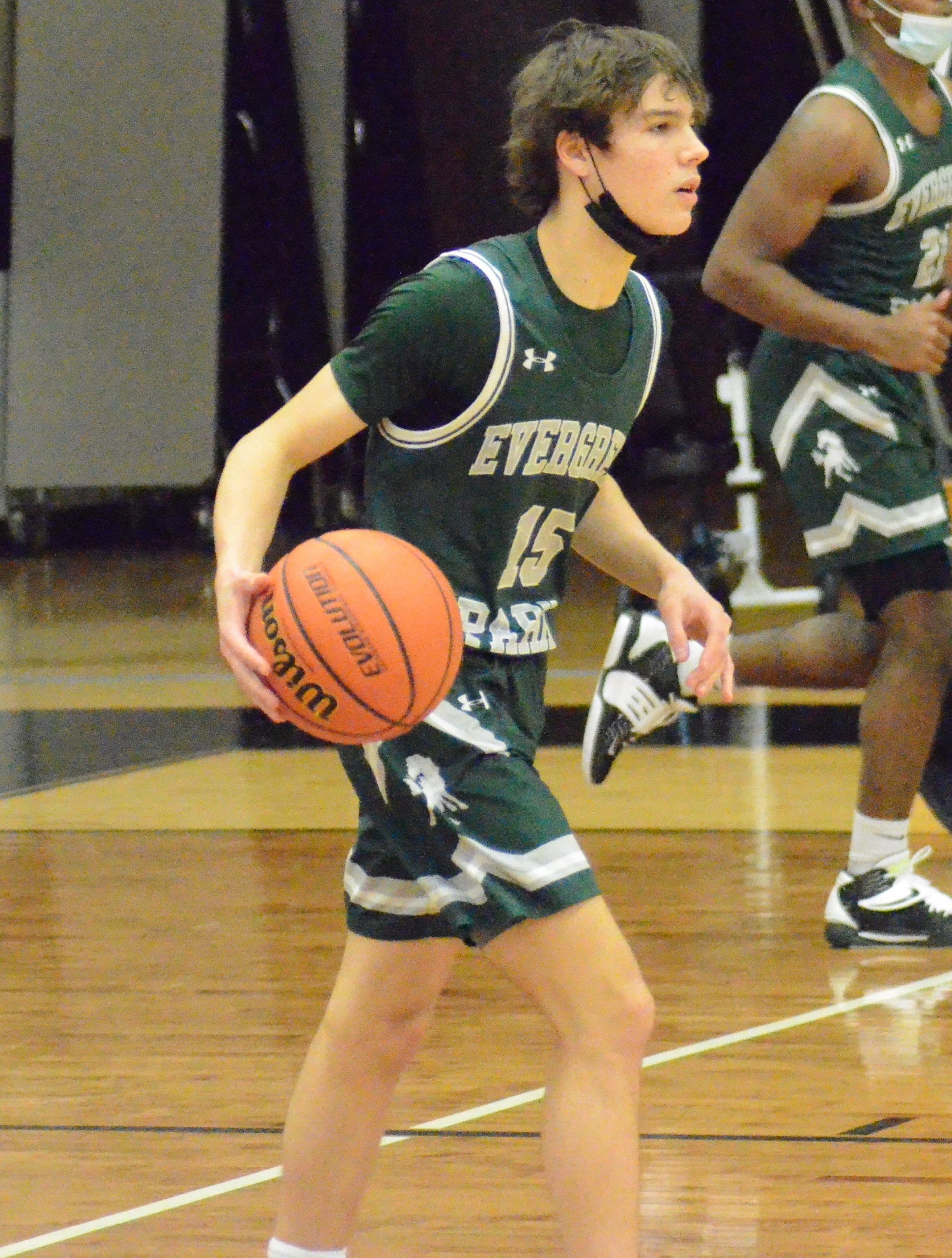 EP sophomore Nolan Sexton brings the ball up the court in a loss at Oak Forest. Photo by Jeff Vorva

The key for coach Jim Sexton is to keep his troops’ heads up after that hellacious part of the schedule, because the remaining 10 games features seven opponents with sub-.500 records.

“We knew this was going to be a tough stretch,” Sexton said. “We played pretty well early in the year. We thought we were a little more prepared for this, so we just have to get back to the drawing board at practice.

“I want us to try to improve every possession that we can. I know that sounds cliché. We have to shoot the ball better. There were times we would get the ball to the middle and to wide-open shooters, and missed layups and uncontested 3-point shots. Obviously, when you make some shots it cures a lot of ills.”

If first impressions mean much, the Mustangs were able to open strong in both the Lemont and Oak Forest games.

They trailed Lemont 23-20 after the first quarter, but Lemont’s Nojus Indrusaitis (29 points), Rokas Castillo (19) and his twin brother Matas Castillo (16 points) proved to be too much of a three-headed monster for Evergreen Park to handle.

Sexton hit a pair of 3-pointers and Nelson added five points to give the Mustangs an 11-7 lead with 4 minutes, 25 seconds left in the first quarter against Oak Forest, but the Bengals went on a 17-point run to put the game away. Nelson finished with 14 points and Sexton had 10.

Indiana State recruit Robbie Avila had 20 points for the Bengals and Fred Robinson had 19 points, including 13 in that 17-point run. 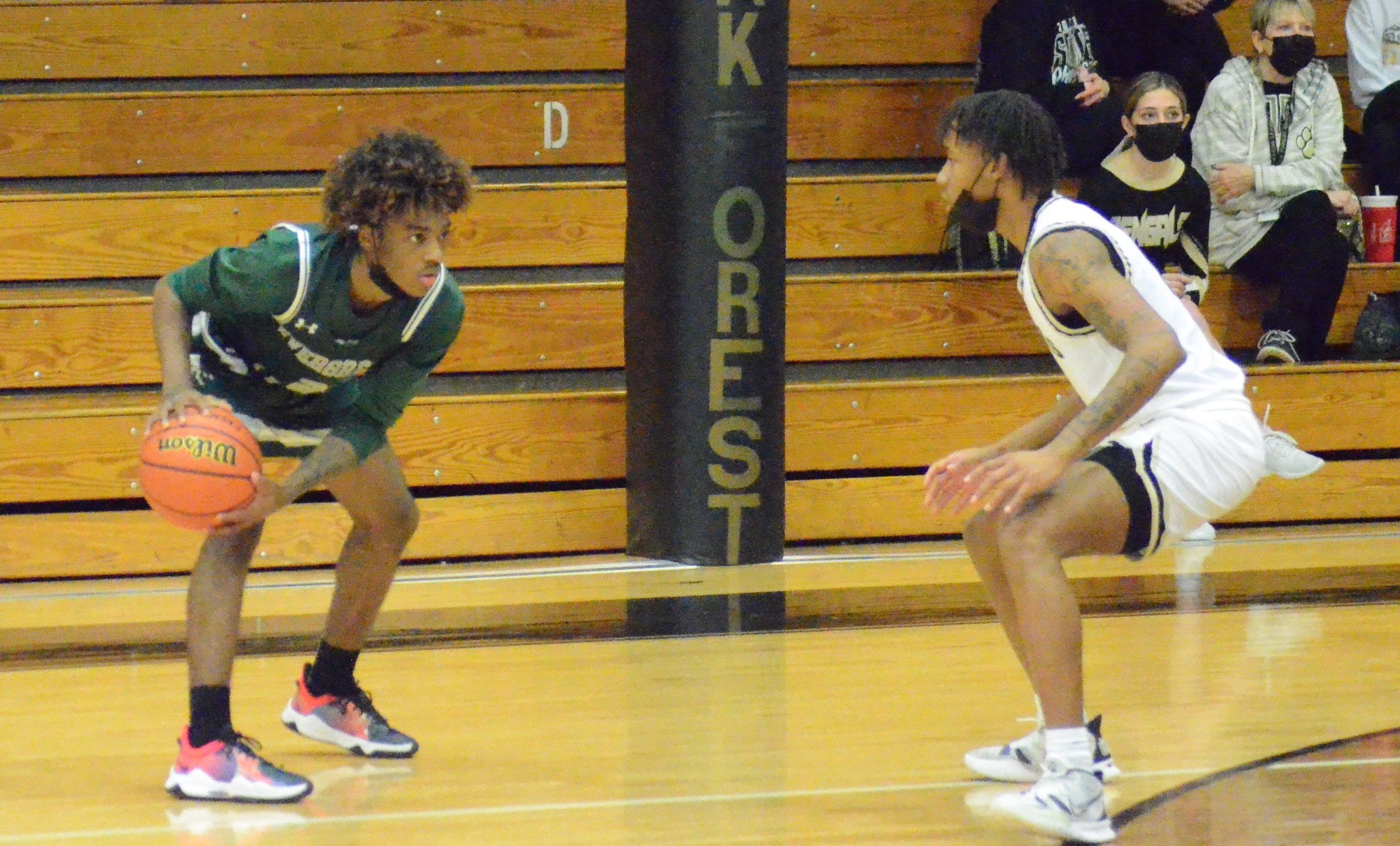 Domingo Feliciano (left) of Evergreen Park looks for a teammate in the Mustangs’ loss to Oak Forest. Photo by Jeff Vorva

By Jeff Vorva Staff Writer So, how did Evergreen Park get to 9-6 over in its first 15 games? The Mustangs took a rollercoaster ride. In a nutshell: They started the season with four consecutive wins, lost the next three, won five straight and then dropped three in a row. The latest three-game losing streak…

Home is where the school is

By Thomas L. Knapp In mid-2020, I mused that if the pandemic ended up producing any silver linings, the most likely bright spot would be its impact on government — so-called “public” — education. Throughout the previous spring, government schools had largely shut down in-person classes, switching to ad hoc and, it seems, fairly lame “remote…

By Rich Miller The Illinois Senate’s COVID-19 mitigation protocols (testing, masks and limited remote voting) didn’t anticipate a partisan attempt to use a record-breaking virus surge to shut the chamber down, but that’s what almost happened last week. Senate Republicans were rightfully outraged that the Democratic super-majority geared up to jam through a redistricting bill…

By Mary Stanek Your correspondent in Archer Heights and West Elsdon 3808 W. 57th Place • (773) 284-7394 Well, that’s it, folks. The holidays are over. Next up in the market are Valentine’s Day candy, paczki, corned beef, Guinness and Peeps. Easter this year is on April 17. I will have to mention that to…

By Peggy Zabicki Your correspondent in West Lawn 3633 W. 60th Place • (773) 504-9327 It’s a new year and a time for new beginnings. Many of us will be starting a new diet program. I plan to do this as soon as I’m done eating the remaining Christmas candy and cookies at my house. Wish me luck! West Lawn…

Two ladies gone, but not forgotten

By Kathy Headley Your correspondent in Chicago Lawn and Marquette Manor 6610 S. Francisco • (773) 776-7778 Guessing you have already read the sad news about the passing of Mary Ellen St. Aubin. For those of you that didn’t know, she grew up right here in Chicago Lawn, on 63rd and Richmond, and attended Marquette… 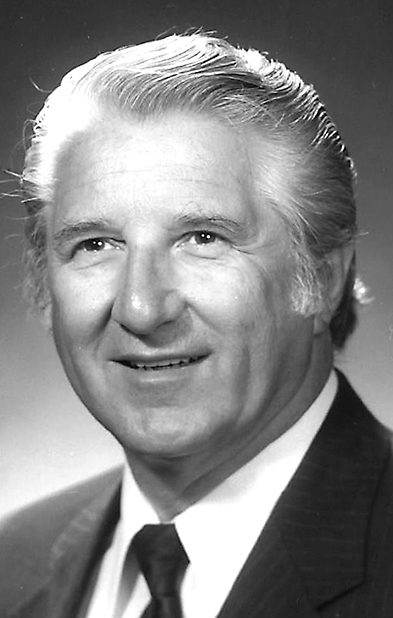 Richard A. “Dick” Dolejs, 81, of Burr Ridge, passed away suddenly on December 17. Mr. Dolejs was a well-known Realtor-property manager. He was born January 10, 1929 in Chicago to Andrew M. Dolejs and Marie Jungvirt. He attended Farragut High School, Millikin University, Northwestern and John Marshall Law School. He served in the Army as…