January 16, 2022/Comments Off on Evans, Adams lead Argo past Shepard on Alumni Night

Argo’s Davonte Evans and Will Adams both knew it was just a matter of time before the Argonauts would find a way to beat Shepard.

That time came in the third quarter of a South Suburban Red matchup, when Argo outscored Shepard en rout to a 61-52 on Jan. 14.

“We just locked in on defense, stayed together as a team,” said Adams, a 6-foot-4 senior forward who scored 13 points.

Argo had outscored Shepard 18-11 in second quarter to take a 28-27 halftime lead, then used a 15-8 advantage in the third to take control heading into the final eight minutes.

“Around the third quarter, they started breaking up a little bit,” Adams said. “They started arguing with each other, so we had to all come together, play defense and lock in.”

As Argo coach Pat Maietta said: “When we defend, we’re pretty good. The challenge is we have to defend all the time.”

Evans, a 6-foot-3 junior guard who led all scorers with 19 points, ignited the Alumni Night crowd in Summit when he stole a pass and followed up with a dunk for a 39-34 lead with 2:45 left in the third quarter.

Moments later, he scored after another steal to make it 41-35.

Shepard junior guard/forward Payton S. Crims made sure the Argonauts had a battle on their hands.

Losing 43-35 after three quarters, Crims went to work. He scored three baskets — one a dunk after a steal — to light a fire and trim Argo’s lead to 45-43. 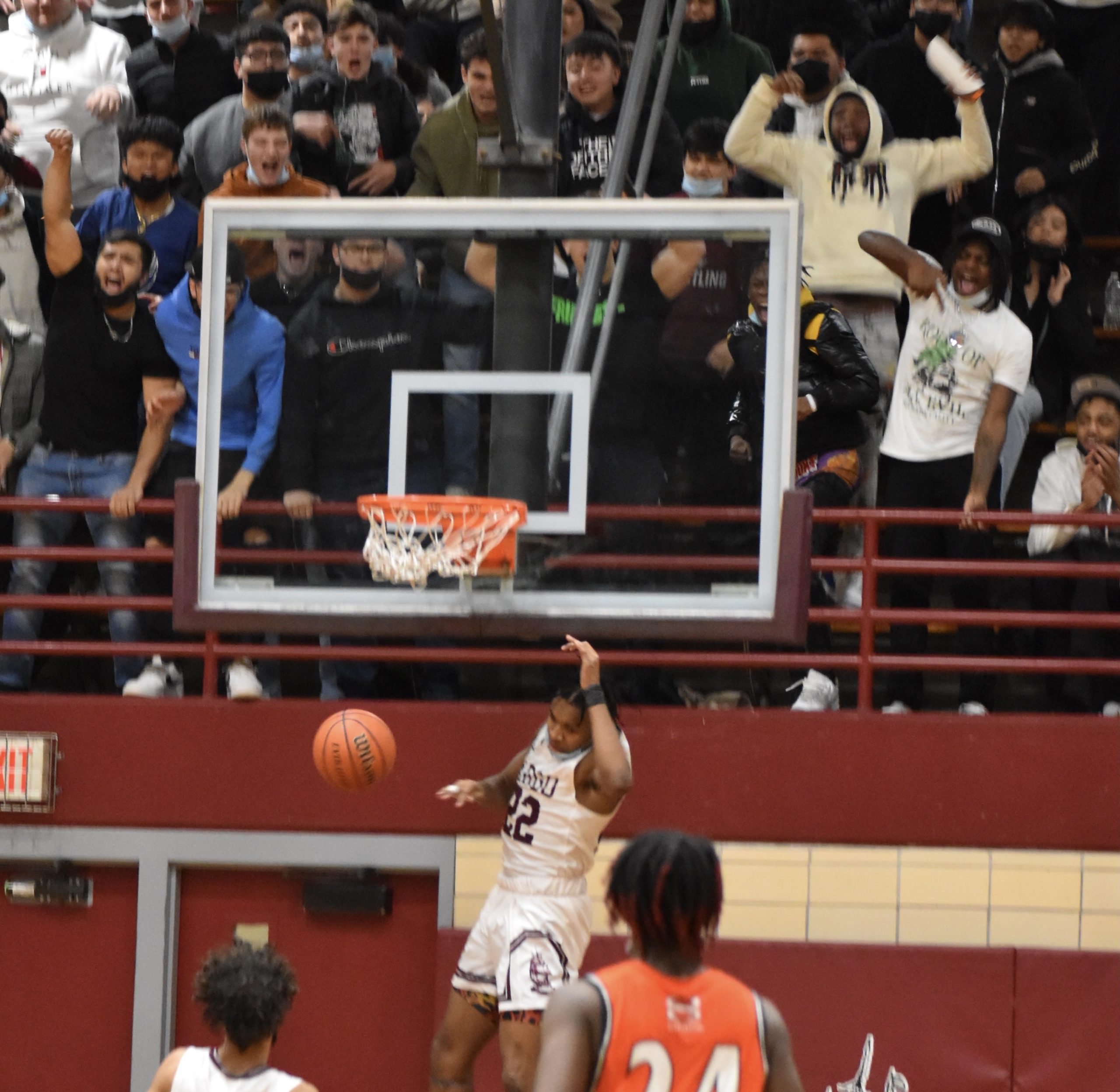 Argo fans celebrate a dunk by Davonte Evans in the third quarter of a win over Shepard on the Argonauts’ Alumni Night. Photo by Steve Metsch

Shepard cut the lead to 53-52 when Kylan Rogers scored with just under two minutes left. But Argo finished on an 8-0 run.

“We fought to get back into it, ran a few sets well, and turned it over against the press,” he added. “I give [Argo] credit. They fought hard, and they executed and got defensives stops where we didn’t.”

Adams blocked a jump shot by the red-hot Crims, who scored 11 of his team-high 16 points in the fourth quarter. Shepard got possession of the ball, but turned it over.

“We’re doing our stuff,” Adams said. “We’re finally getting our rhythm down. We’re on a roll. We’re going to keep getting it done.”

Maietta said Adams and Evans are hard workers and made some plays.

“We knew it was going to be a battle and come down to the end,” he said. “All of our games do any time we play Shepard. I didn’t expect anything less.

“It’s always nice to get a win, especially on Alumni Night in front of a nice crowd.”

That crowd was roaring when Evans sealed the victory at the final buzzer with a rousing dunk.

“They want to make a splashy play,” Maietta said. “I’d rather just dribble out the clock and get the W. But it’s nice to get a W.”