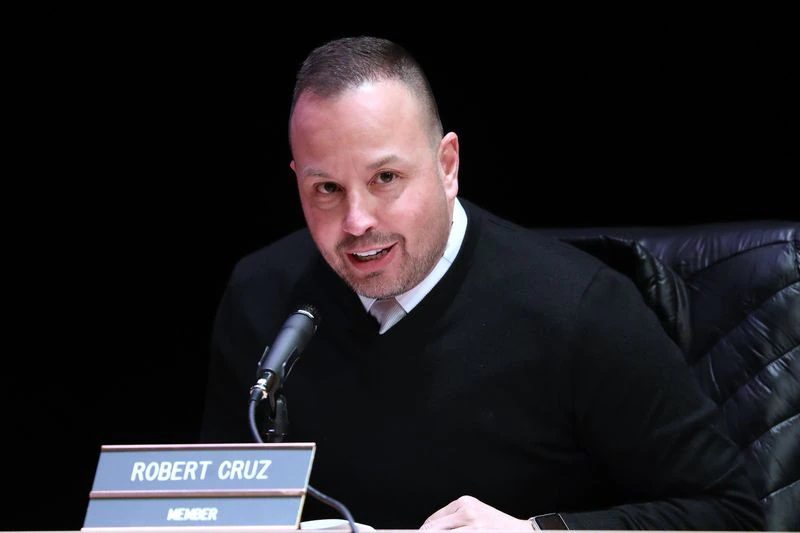 There is a vacancy on the Oak Lawn Community High School District 229 School Board, after members voted 6-1 last week to remove Robert Cruz for allegedly violating his oath of office, school board policy and state statutes.

Cruz, a property developer, was elected to the District 229 board in April 2021. The resolution removing him at the January 12 special meeting followed his decision to file lawsuits last fall against Gov. JB Pritzker, state Superintendent of Education Carmen Ayala and District 229 itself, aimed at ending the governor’s mask mandates for schools.

He withdrew the first lawsuit against the state officials because he filed it as a member of the school board. But he filed a second one, with co-plaintiff Scott Jones, and named the district itself as a defendant, which cost the district $25,000 in legal fees. A federal judge dismissed that lawsuit last month, saying that in light of the COVID-19 pandemic, the mask mandate did not violate their “fundamental liberty interest in the care, custody, education and control of their children.”

If the resolution declaring a vacancy had not passed, the board could have petitioned the state superintendent of education to remove Cruz, or just censured him.

Cruz, who said he was facing “unfair charges,” claimed he only filed suit because the mask mandates were having a detrimental effect on students. But he was accused of using them to advance his candidacy in the June 28 Republican primary for the newly redrawn 6th Congressional District.

On Jan. 11, district Supt. Michael Riordan issued a statement disputing several “misstatements” about the board and district made in Cruz’s last news release notifying his supporters of the hearing in the Performing Arts Center at the Oak Lawn high school.

“It’s not an easy decision to make knowing there are strong feelings on both sides of this issue…(But) it’s important that Cruz not be allowed to rewrite this story to paint himself as a victim,” said Oak Lawn resident Bill Beaulieu, praising the board’s’ “courage and integrity” for calling the hearing when the floor was opened for public comment. Other audience members defended Cruz.

“I find it really distasteful” and “deeply disturbing” that a school board would try to remove a member “for being an advocate for the child,” said Ashley Ramos.

“What I am seeing is a total disgrace,” said Tom Cyplik, a 53-year village resident.

As District 229 attorney Burt Odelson laid out the case against Cruz, he pointed out that the alleged violations did not involve mask mandates, Gov. Pritzker or his political views in general.

“You are charged as a board member for failing to perform your official duties when you violated your oath of office multiple times, and other statutory violations,” said Odelson, who was heckled throughout the proceedings by Scott Jones, Cruz’s co-plaintiff, sitting in the front row.

Odelson said filing one lawsuit as a board member and then naming the school district as a defendant in a second one brought District 229 into disrepute and cost $25,000 in legal fees.

“A board member has no legal authority as an individual and decisions can only be made by majority vote at a public board meeting, while retaining the right to seek changes through ethical and constructive challenges,” he said, quoting the oath of office.

Odelson also said “surrendering responsibilities to special interests or partisan political groups, using the office for personal gain or publicity, or taking actions that might compromise the board or administration” were violations of the school code.

When questioning Cruz before voting on his removal, member Tim Burke asked why he “never mentioned the mask mandate in any meeting at all,” and then abstained, rather than voted against, a resolution passed in August agreeing to abide by state mandates.

“This is not being done lightly,” said member Matthew Egan, criticizing Cruz for focusing on other issues unrelated to the charges during the hearing. “What you are doing is way off-line. The whole point in government is to legislate not litigate.”

Cruz said he was faced with “unfair charges” and was fighting “government by fiat.” He claimed the request for attorney’s fees was done as a formality, and expected a judge not to award any.

“You may disagree with the way I went about this, and I apologized to every board member individually. But I believe our system of government is under threat,” said Cruz, urging the board to “rage against the dying of the light,” quoting Dylan Thomas.

During the hearing, he intimated that the board could be sued for violating his rights, and said afterward that an announcement of his next move “will be coming.”

“What they have done is a massive overreach. We are going to run against them three deep (in the next election),” said Joe Amado, a Cruz supporter after the meeting.

District 229 administers Oak Lawn Community High School. The school board must now appoint a replacement who will serve the remainder of Cruz’s term.