Robbed at gunpoint in his own garage

Home-security camera images of a 48-year-old Gage Park man being robbed at gunpoint in his own garage outraged a number of Southwest Siders this week. 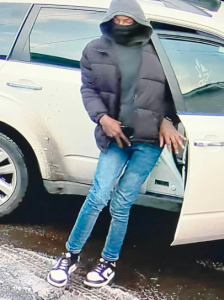 The gunman who hit and robbed a Gage Park man in his car in his own garage. –Screenshots from surveillance video

Images showed the man driving his car down the alley in the 5500 block of South Richmond at about 3:50 p.m. Thursday, Jan. 13. Police said later that the man was coming home from a bank.

About five houses behind him, another vehicle slowly followed.

As the victim approached his garage, at about mid-block, he activated his automatic garage door opener and then backed in.

Just as he got his car all the way in, the second vehicle pulled up to his open garage and stopped—blocking the opening.

Police said the gunman hit the victim “numerous times” with the handgun before taking the victim’s wallet and cellphone. The CPD official declined to say how much money was in the wallet. He also did not speculate on whether the robbers had followed the victim from the bank. 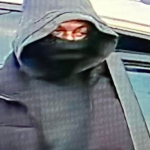 Police said the victim was in good physical condition.

They did not offer a description of the criminals, but images show the gunman as a black man age 21-39, about medium height and a thin build. He wore a black jacket over a gray hoody, tight blue jeans and black-and-white athletic shoes.

Police also declined to describe the vehicle in any significant detail, but images show it as a white, four-door Subaru with luggage rails on top. Its license plate number appears to be B95 157, and there does not appear to be a vehicle sticker on the front windshield. 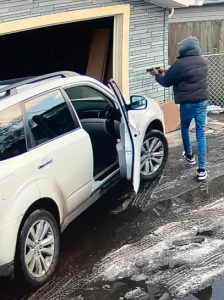 The initial post of the video on Facebook generated nearly 800 comments. It was shared more than 5,400 times.

“We moved [to Gage Park] from Pilsen to get away from this sort of crime,” Silvia Ugarte said. “Is it time to move again?”

Diego Ayala wondered “where the police are. We keep asking again and again for more police, but we never get any—and then [Mayor Lori Lightfoot] takes away the few police we do have, to guard rich people’s stores on Michigan Avenue.”

Others, like Esther Roque, said the crime shows that people “need to be more aware of their surroundings—front, back and sides. You need to use your car’s mirrors; and if you see someone following you home, drive away and call 911.”

Still others cited the crime as an example of why people need to arm themselves, recommending that they get CCW training from Southwest Side companies like Illinois Concealed Training, 5718 S. Archer. A company representative said their January CCW classes filled quickly, and they are now accepting registration for February.