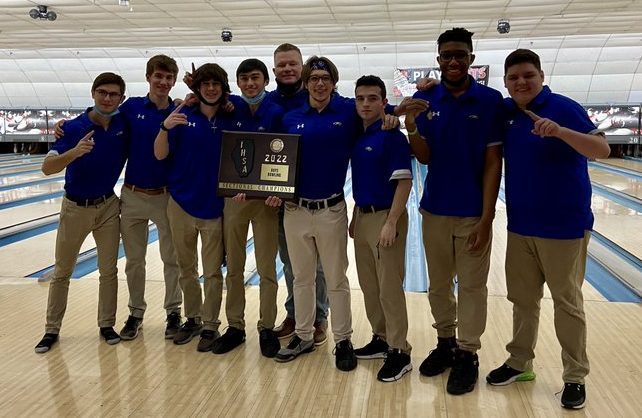 Sandburg’s boys bowling team is headed to state for the first time since 2017 after winning its own sectional on Saturday. Photo courtesy of Carl Sandburg

The first two IHSA state tournaments for winter sports will take place this weekend, and an army of area athletes will be competing in both.

The boys bowling and competitive dance championships will be held Friday and Saturday, with the bowlers heading to St. Clair Bowl in O’Fallon and the dancers to Grossinger Motors Arena in Bloomington.

Bowling
Sandburg was the lone sectional champion as the Eagles won their own tournament at Orland Bowl, firing a 6,515. It was the third sectional title in school history and sixth time the Eagles made it to state as a team, the last coming in 2017.

Sophomore Woodley Dangerfield earned some respect taking first place with a 1,526 six-game series. Junior Gabe Castro fired a 1,328, senior Ryan Fry had a 1,270 and senior John Durkin had a 1,219. Senior Joe Zellinger rolled a 1,001 in five games and sophomore Adam Durkin had a 171 in one game.

Richards’ Danny LaBonte was the lone individual from that sectional to qualify as he tossed a 1,370. He finished 22nd in the state as a freshman in 2018 and fourth in 2019. The state meet was not held in 2020 because of COVID-19 concerns.

At the Glenbard East Sectional at Bowlero in Glendale Heights, Lyons (6,297) finished third and Reavis (6,113) finished sixth to qualify for state.

It’s the sixth time the Lions qualified for state.

It’s also the sixth time for Reavis as well. The Rams were led in the sectional by junior Colin Quartuccio had a 1,300, senior Anthony Tanas had a 1,249, junior Ethan DeLuca a 1,211 and senior Nicholas Tanas an 1,151. Senior Sebastian Sandoval rolled a 1,058 in six games and senior Marshall Skuby had a 144 in one game.

Individually, Argo’s Mason Juergens tossed a 1,336 and St. Rita’s Raymone Saffold had a 1,320 to qualify for state. 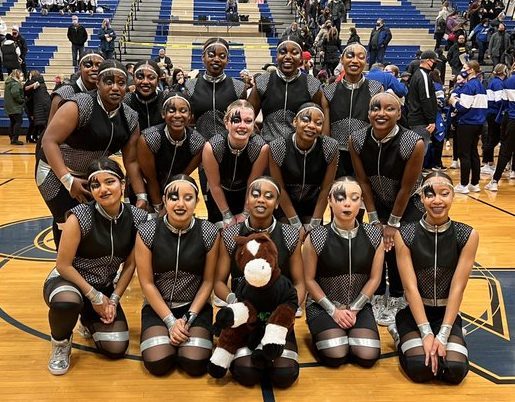 Evergreen Park’s competitive dance team had the best area sectional finish with a runnerup showing in Class 1A at Geneva. Photo courtesy of Evergreen Park

Competitive Dance
In competitive dancing, Evergreen Park took second place in Class 1A of the Geneva Sectional with an 83.12, a fraction behind champion Montini, which had an 83.70. It’s the fourth trip to state for the Mustangs.

Nazareth finished sixth to grab the final qualifying spot with a 78.73. It’s the Roadrunners’ third trip to state.

In Class 2A at the same sectional, Richards placed fourth with an 82.83 and will make its state debut. Marist had a heartbreaking seventh-place finish and missed a state big by a half of a point with an 80.07. East Suburban Catholic Conference foe Benet knocked the RedHawks out with an 80.57

At Deerfield, Lyons qualified for the fifth straight time by finishing fourth in Class 3A with an 87.77. Maine South won with 93.23.