January 25, 2022/Comments Off on Barron ready to pitch in as new SD218 superintendent 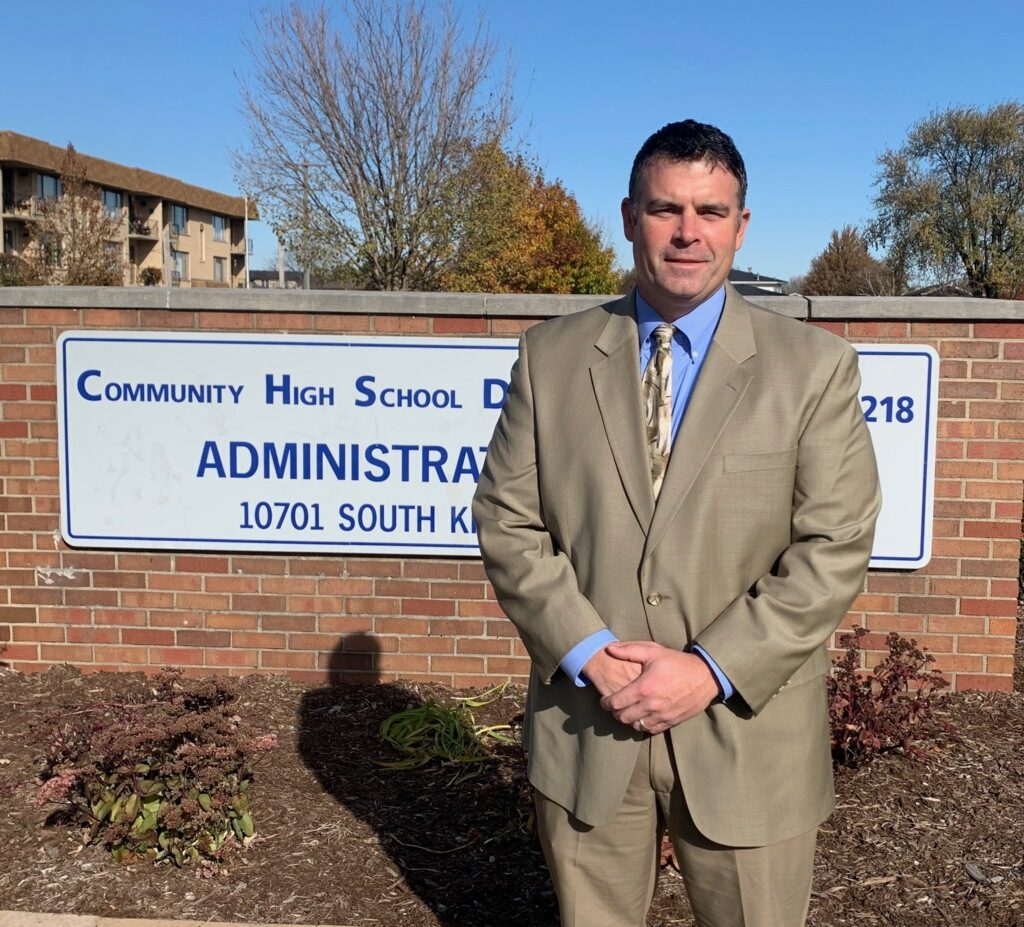 Josh Barron has been named the new superintendent of District 218. (Photo supplied by District 218)

Barron ready to pitch in as new SD218 superintendent

So, he embarked on a different career path, teaching and coaching, and that evolved into his becoming a school administrator.

He has worked his way up to the top spot as he was named the new Consolidated High School District 218 superintendent at last Thursday’s board meeting. He replaces Ty Harting, who is retiring in June.

Barron, 47, has been with the district for 13 years and was a principal at Shepard High School before he was hired as the district’s assistant superintendent of curriculum and instruction in 2015. The district serves Shepard, Richards and Eisenhower high schools.

“It’s a big responsibility and a big job,” he said. “I’m ready for the occasion.”

The former Mount Carmel two-sport athlete pitched for Lewis University and his 91-mph fastball attracted major league scouts his freshman year. But he suffered an elbow injury that year and while he still piled up wins for the Flyers (34 career wins) after surgery, he could never again hit 90 on the radar gun and scouts lost interest.

After playing a year in Australia, he was looking for one more chance to be seen as he played independent ball with the Cook County Cheetahs and he said he was doing well before a traffic accident. He said he walked away from the accident unharmed, but he never felt the same on the mound.

Barron said it was a disappointment, but it helped shape him. He was always one who embraced hard work – he used to clean Mount Carmel to make money when he wasn’t playing football and baseball – and he channeled his energy into teaching and coaching.

He said that when he was asked to take an administrative role at Stagg High School, he wasn’t sure what to expect, but he found himself enjoying it.

By spending time under Harting’s wing, Barron had a chance to see what life is like as the boss.

“That hardest part is that you never know what’s going to happen each day. Every day there is a new challenge. You have to be as prepared as possible to resolve it and work at solving problems.”

He said the pandemic has been a “constant moving target” for administrators to try to solve and while District 218 decision makers have taken some criticism from the public, Barron said, “We’re here to do what’s best for the kids.”

Barron said he has lived in the Morgan Park/Beverly area for 45 years. He was born in Boston and never met his father and moved to the area at a young age. His grandmother was a longtime Oak Lawn resident. He is married and has three children.

Harting is glad to see Barron replace him.

In a letter to staff members, Harting wrote: “His well-rounded professional experiences, and his time working in 218, make Josh an excellent educator to lead this district moving forward.

“He is passionate about our students, our staff, and our communities and he is very excited to help lead the district to even greater heights. Most exciting to me is that Dr. Barron’s hiring allows the district to maintain some sustainability as we continue to work on school improvement. While he will undoubtably bring new ideas and perspectives to the district, you will also be able to continue and improve on some of the good works that have been put in place over the last several years.”

Barron speaks highly of his boss.

“He’s a great mentor and friend and I have learned a lot from him,” Barron said. “If it wasn’t for him, I wouldn’t be here today.”