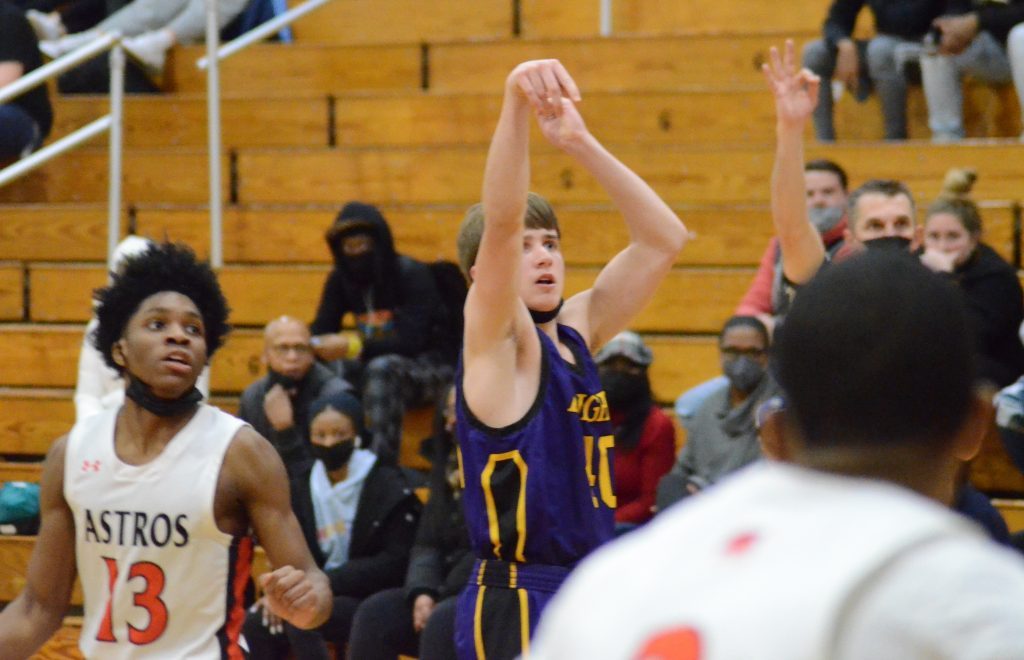 Liam Crotty of Chicago Christian hits the go-ahead 3-point basket in the final minute of a 44-40 victory over Shepard on Jan. 26. Photo by Jeff Vorva

It was a subdued celebration after a 44-40 road victory over Shepard on Jan. 26 in the Battle of Palos Heights.

The Knights acted like they had been there before, even though the truth of the matter is they haven’t been enjoying very many victories this season.

After heading downstairs and shutting the door to the visitor’s locker room, there was an explosion of yelling and joy.

It’s been a rough season for both Chicago Christian and Shepard. The two team were a combined 12-31 heading into the game.

“Talking with Tony before the game and during the season, we commiserate a little bit and we were crying on each other’s shoulders because what we’re both going through is very similar,” Pittman said. “So, I was extremely happy that we were able to grind one out. When it was time to execute at the end we got a few stops and some big baskets and free throws at the end.

With the score tied at 38, Chicago Christian’s Liam Crotty hit a 3-pointer with 49 seconds left to put his team ahead for good. Evan Ortiz popped in three free throws to seal the victory. 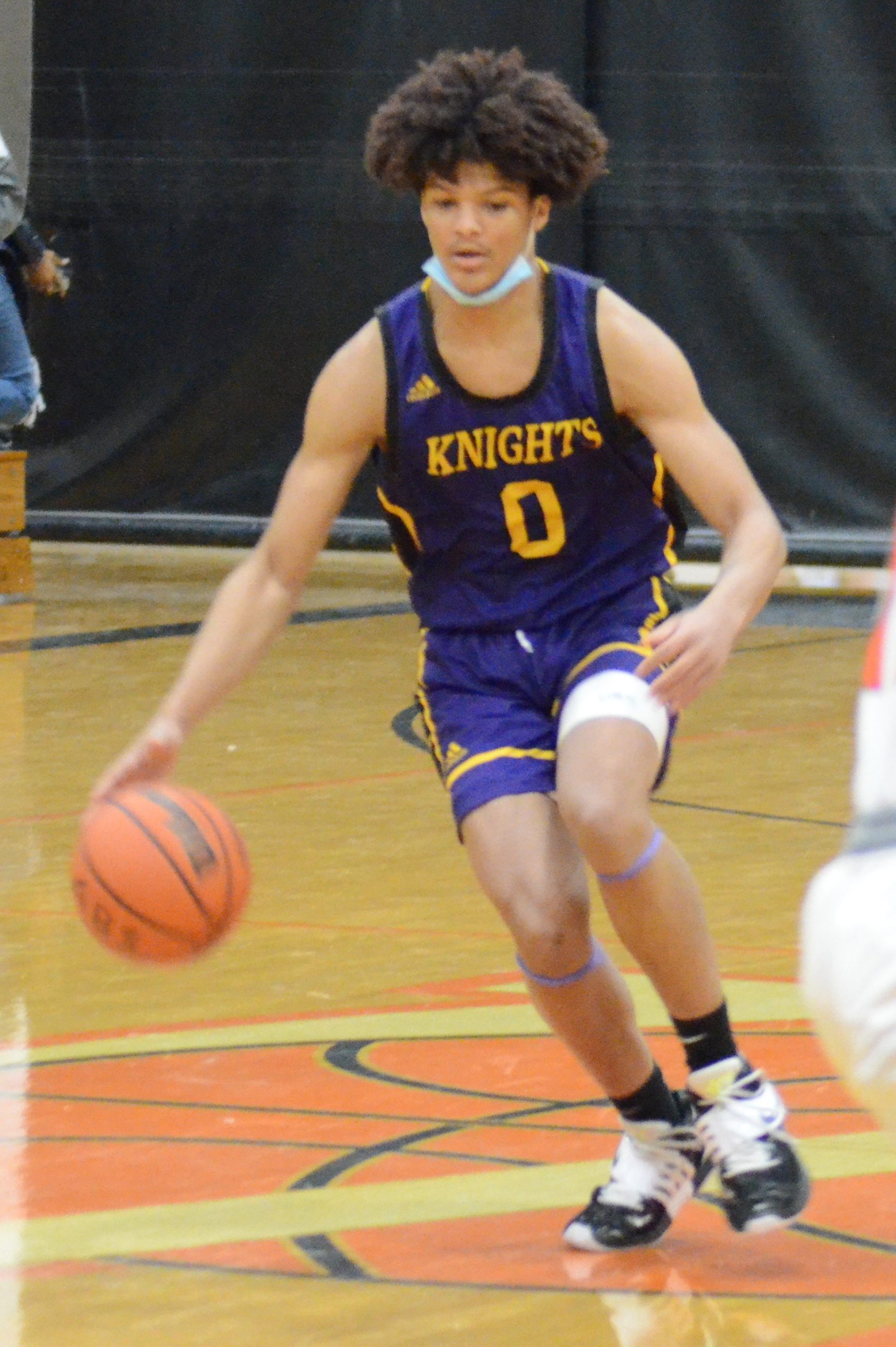 Evan Ortiz had 18 points for Chicago Christian in a 44-40 win over crosstown rival Shepard. Photo by Jeff Vorva

Ortiz scored 16 of his 18 points in the second half, nine of those in the fourth quarter.

“Honestly, this is the momentum we need going into the final stretch of the season,” said Ortiz, a 6-foot-2 senior. “After getting beat up a little bit, it finally feels good to beat somebody else.”

Crotty, a 5-9 junior, finished with nine points as he hit 3-pointers in the second, third and fourth quarters. The tie-breaking shot was huge in helping to snap a six-game losing streak. Pittman said that on some occasions, Crotty has been hesitant to pull the trigger on the shot like that.

“We were missing one of our starters (point guard Joel Crowell) so I had to take on a bigger role,” Crotty said. “I was trying to take every open shot that I got.”

Luke Jelderks had nine first-half points to keep the Knights close and Shepard had a 20-19 lead at the break.

“Luke has been battling shin injuries all year and for him to put in the amount of minutes he did defensively was big,” Pittman said. “He said at the beginning of the game he didn’t know if he could go. I think he came out for about a minute. I want to pat that kid on the back and say that was a big reason we won, because he does a lot of different things for us.”

Kyan Owokoniran led Shepard with 13 points. Markus Miree hit back-to-back 3-pointers to help give the Astros a 13-9 lead in the first.

Through their first 21 games, the Astros had played just four games decided by less than 10 points this season and were 3-1 in those. They also won by 11 over College Prep of America in a game that went three overtimes.

“This loss hurt,” Chiuccariello said. “We got off to a quick start and attacked the basket, which is what we wanted to do. But at the end, they executed and we didn’t. We had shots and made the right reads but couldn’t make the shots.

“We’re still looking for improvement every day even though the schedule is not getting any easier.” 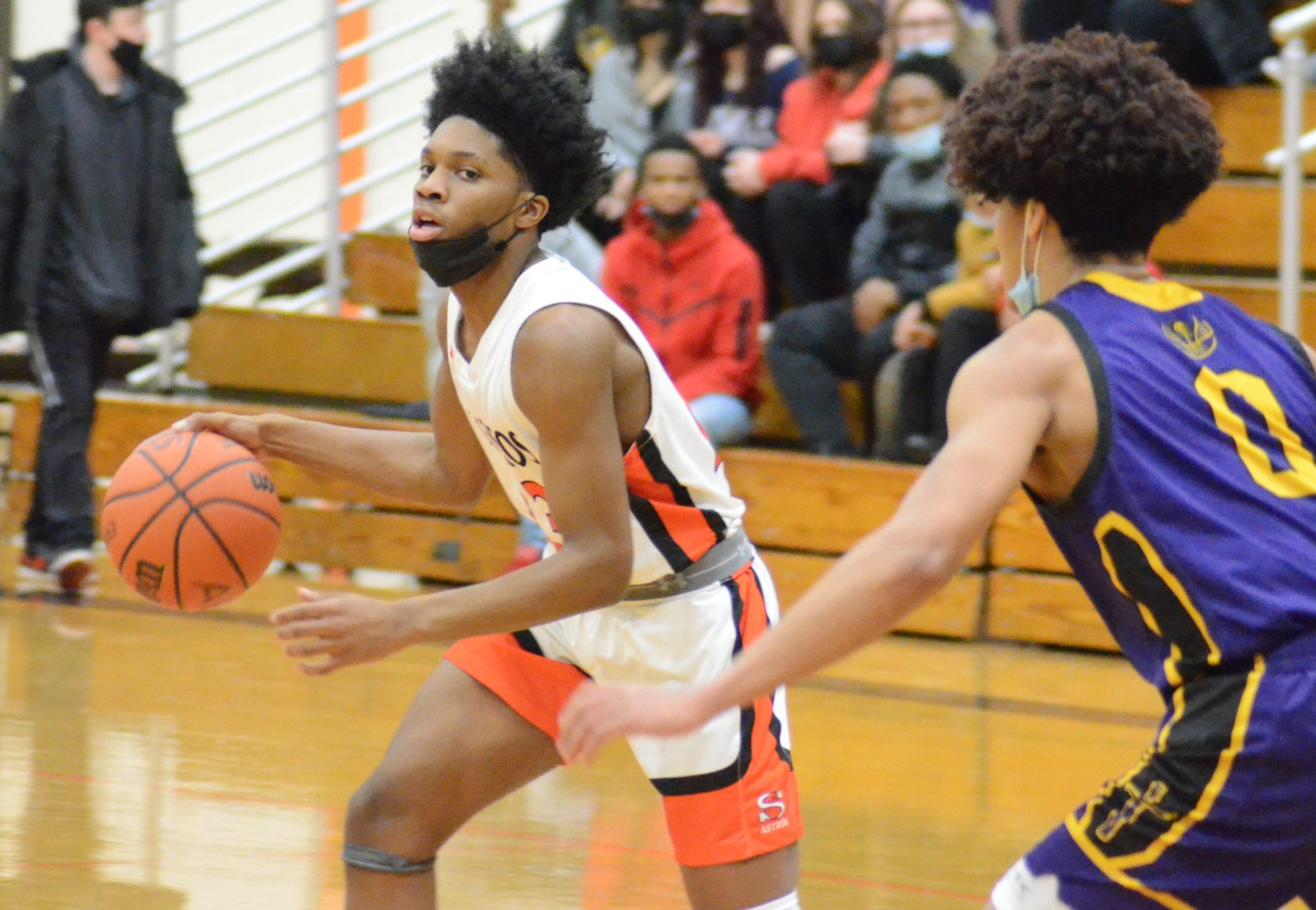