February 1, 2022/Comments Off on District 230 waits for judge’s decision on mask mandates 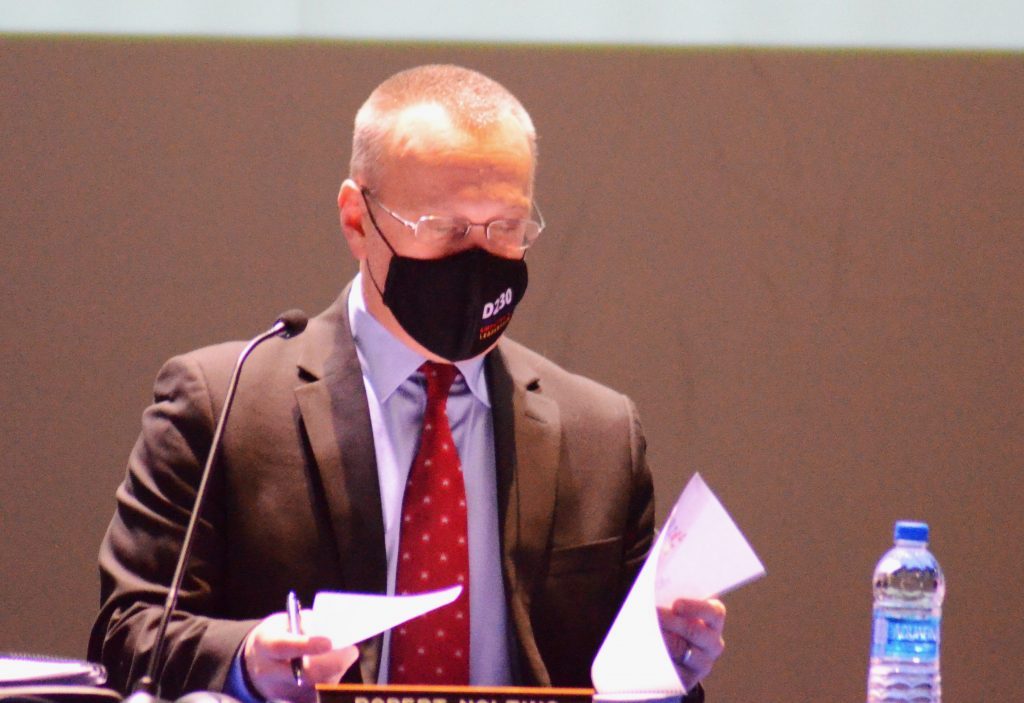 District 230 Supt. Robert Nolting said 145 districts across the state involved in a lawsuit are waiting a judge’s decision. (Photo by Jeff Vorva)

Stagg and Sandburg students, parents and teachers are awaiting the decision of a Sangamon County judge to find out if there is any change in the mask mandate.

District 230 was one of 145 districts in the state taken to court by parents who are against the mandate and believe that students and employees in the schools should have a choice.

Judge Raylene Grischow heard all of the arguments in January and planned on rendering a decision no sooner than last Friday. As of noon Tuesday, no decision has been announced.

That has put school districts involved in a state of being ready for anything.

“The judge closed the argument and between (last Friday and this Friday) we think she will make a determination,” District 230 Supt. Robert Nolting said after Thursday’s board meeting. “At the heart of the trial is the mask mandate from the governor’s office that schools are following and the ability to essentially quarantine students who are not sick but deemed to be close to a student or anyone who is COVID-positive.

“The challenge to districts who are named in particular are without knowing what might happen…we’re not sure what that might mean for schools in terms of our mask policy or our quarantines policies the day after the judge determines her decision.”

Nolting said during the meeting that any decision she made would likely be appealed by the losing side.

According to the Capitol News Service, the lawsuit was filed in 2021 by Greenville lawyer Thomas DeVore, who has lost other similar lawsuits.

The Illinois Federation of Teachers has entered the case as intervenors, according to CNS.

CNS also said the Illinois Federation of Teachers filed separately to say that the public health interest involved in preventing the spread of COVID-19 should outweigh any individual right of those challenging the mandates.

District 230 parent Diane DeVito, who has been outspoken against the mask mandates in the past, spoke to the board on Thursday and stated that Gov. J.B. Pritzker has been swayed by teachers’ unions.

“The governor has proved through the entire pandemic that he cares nothing for our students and places their needs last,” she said.