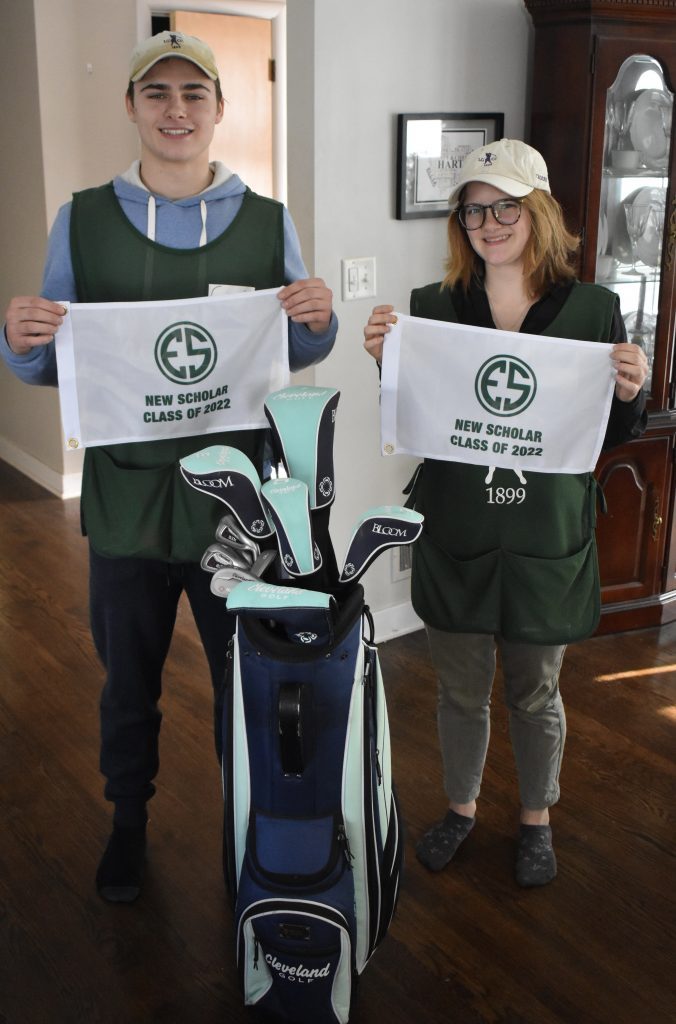 Twins Casey and Caroline Hart, of La Grange, will attend college for free as Chick Evans Scholars. Seniors at Lyons Township High School, they both are caddies at the La Grange Country Club. (Photo by Steve Metsch)

Long hours spent in the La Grange Country Club’s caddie shack – killing time by reading books or playing cards as they wait to be called to duty – have paid off for a brother and sister.

Through the past four years, Caroline and Casey Hart honed their skills, learned how to read greens and helped members win tournaments not to mention a wager now and then.

Add time they’ve spent hitting the books and getting good grades, and you have a winning combination, the kind that parents and high school kids dream about.

Winning a Chick Evans Scholarship is kind of like making a hole-in-one: The satisfaction is immense and it’s rarely done.

Recipients get the four years of college tuition and housing paid for by the program that’s supported by the Western Golf Association.

That sort of what happened in late November when a large envelope was delivered to the Hart home in La Grange.

The twins who turn 18 on Feb. 12 received the good news that they are both Chick Evans Scholars.

Yep, two college tuitions and housing paid for in their entirety.

Each will live in a Chick Evans house at a participating university. Most of the Big Ten schools participate.

The twins have not determined yet where they will enroll. For the time being, they are content to bask in this tremendous turn of events.

According to the organization, there are 1,070 Evans Scholars attending 21 universities. And, there are 11,556 alumni.

In 2021, Evans Scholars had a 95 percent graduation rate and a cumulate GPA of 3.4. That’s just below the 4.0 and 3.87 non-weighted GPA of Caroline and Casey, respectively.

Casey knew about the Chick Evans program from older brother Carson, who also worked as a caddie at the country club. Asked if it was a goal, Casey said, “definitely.”

This summer will be the twins’ fifth as caddies.

Waiting for a “loop,” alias 18 holes on a golf bag for a club member, can be tedious. Caroline usually spends free time reading. Casey? “Poker and blackjack.”

They think Brian Kopecky, the club’s caddie master who is called “Coach” by everyone, may have helped.

“He knows a lot of people there. He definitely helped us out, put in a good word for us,” Casey said of Kopecky, the varsity golf coach at Lyons Township High School, where they are seniors.

Casey recalled the day the envelope arrived while he was at a friend’s house.

“My mom texted me, ‘Come home immediately.’ I asked her what’s going on. She wouldn’t answer me. I thought I was in big trouble,” he said.

When he got home, the entire family was in the living room. Carson walked into the room holding a large envelope that, it turned out, held very good news.

They both replied that Casey was the better caddie. “I said she’s the better student, slightly better,” he said with a smile.

Casey plans to major in mechanical engineering. Caroline wants to double-major in English and marketing with a goal of working in publishing.

Their parents, Chris and Paul Hart, are thrilled knowing four years of college tuition and housing for two children are covered.

“Unbelievable,” Chris, a librarian at a school in Chicago, added.

One reason they are relieved is because Carson and Katie – the couple’s first twins – are college sophomores and have two more years of schooling.

Casey and Caroline, who will be lugging golf bags again this year, admit their first year was a bit overwhelming.

Caroline said it was “pretty scary” at the start, but she soon adapted as one of the 10 or so female caddies at the club.

“I’ve made some really great friends,” she said.

Neither of them golf, but she won clubs in the year-end banquet. Each has learned the nuances of the golf course and now help golfers improve their scores.

“You learn to read the greens,” Casey said. “That’s a big part of it.”

He’s come a long way from his first tournament when a member was none too happy being assigned a raw rookie caddie who didn’t even own a rangefinder.

“By the end of the tournament, I won him over,” Casey said. “He liked me. I got the yardage for him, and we ended up placing second.”

And now he and his twin sister have placed first.