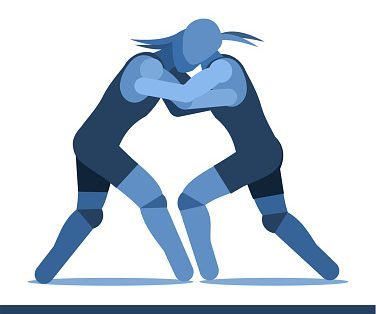 For Morton senior Karla Topete, Feb. 12 was a special day for a greater reason than just her winning a sectional wrestling championship.

Topete and her teammates competed at the Andrew Sectional, one of four sectionals that marked the start of the IHSA’s first individual girls wrestling state series.

For the first time, girls have a chance to compete against other girls for a state championship.

“It’s pretty exciting,” Topete said. “I’ve been wrestling since sixth grade and there was a time where there were no girls. So, aside from winning, just seeing all these girls is amazing.”

Topete (14-1), who pinned Oak Forest’s Sabrina Sifuentez in the 130-pound championship match, was one of three champions for Morton.

There was no official team champion in the event, but Morton had the highest score in the unofficial team standings out of the 37 schools competing.

“I feel like a proud mom since I’m one of the co-captains,” Morton senior Jennifer Villagomez said. “I feel so proud of everyone that they wrestled so hard and didn’t give up.

“I try to help them at practice and tell them, ‘Oh, do this,’ and to see them do it in matches makes me feel so proud of everyone.”

Villagomez (14-1), who pinned Hillcrest’s Cha`Anna Kassim in the finals at 110 pounds, said she was not able to qualify for the girls state finals held by the Illinois Wrestling Coaches and Officials Association in previous years, so she was thrilled to break through in her final high school season.

“I felt like this year I was ready to come forward after so many hard practices,” she said. “I feel like it was all worth it. It feels very exciting.”

Morton junior Leilany De Leon said she dealt with a lot of anxiety throughout the day, but it did not show in her results.

De Leon (10-2) pinned all three of her opponents, including Kankakee’s Estefany Mendez in the 120-pound championship match.

“I get so nervous,” De Leon said. “I was late for my last match because my coach had to talk to me to calm me down. He said, ‘It doesn’t matter, you’re already going to state, just try your best and have fun.’ Also, I didn’t want to lose.

“This is history. I still can’t believe it.”

The Andrew co-op team qualified six wrestlers for state. Four of them are Andrew students, but two go to the other District 230 schools.

Stagg sophomore Ava McGuire (5-7) finished second at 145, pinning Joselin Rodriguez from Back of the Yards in the semifinals to clinch her spot at state.

Sandburg freshman Emma Akpan (14-6) also was a runner-up, at 170. She had two pins, including one over Homewood-Flossmoor’s Madison Skowronski in the semifinals.

Evergreen Park junior Elliana Balderrama (11-5) bounced back from a loss in the semifinals at 155 to pin her final two opponents at finish third.

In the consolation semifinals — also known as the “blood round” as winners clinch their spot at state and losers are eliminated — Balderrama needed just 16 seconds to pin Back of the Yards’ Rachael Villegas.

“I just used heavy hands and threw her down, got it over,” Balderrama said. “It was a big relief. I knew I had to get the job done.

“This means literally everything. I love the sport. I’m a first-year wrestler and this has given me so many opportunities. I love going out there by myself and putting it all on there on the mat.”

Riverside-Brookfield sophomore Eleanor Aphay (17-7) also came through with a pin in the blood round, defeating Oak Park-River Forest’s Maria Diaz to clinch her spot at state. Aphay finished fourth.

“It feels amazing, especially for my first year wrestling to make it to state,” she said. “It feels like a big accomplishment.”

Mother McAuley’s Maggie Summer, St. Laurence’s Christel Rodriguez and Marist’s Reese O’Keefe all made it to the blood round, but fell one win short of qualifying for state.

Rodriguez and O’Keefe each had to win just one match to reach that round.

Zumer, a freshman competing in a 13-wrestler bracket at 125, had three pins but got pinned by Lincoln-Way Central’s Ashley Villa in the blood round.

Still, it was a memorable day.

“It’s amazing,” Zumer said. “All the girls wrestling, it’s such a great experience. You see all these girls who are just like you doing their best. It’s always so cool with the competitiveness but also the sportsmanship that people might not always see.”

By JERRY NOWICKI Capitol News Illinois [email protected]nois.com SPRINGFIELD – The six Republican candidates for Illinois governor faced off Tuesday night in Chicago, albeit on two separate debate stages, hours after a shooting at a Texas elementary school that dominated a large portion of the debates. A scheduling conflict between two TV networks – WGN and…