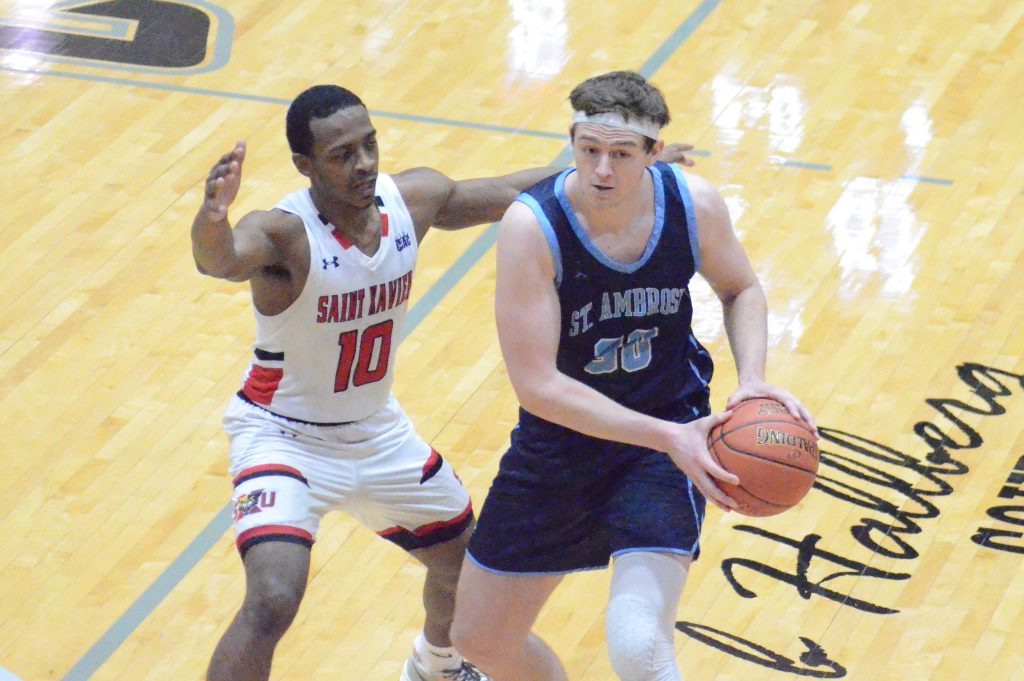 Stagg graduate Tom Kazanecki, right, is guarded by St. Xavier University’s Joshua Evans during a recent game. Kazanecki changed his mind on playing an extra season for St. Ambrose after he was injured in a practice. Photo by Jeff Vorva

The idea was for Tom Kazanecki to finish his basketball career at St. Ambrose in 2021.

The former Stagg hoops standout was even toying with the idea of starting a military career, even though he had an extra year of athletics eligibility remaining, thanks to seasons getting snipped because of COVID-19.

Basketball was going to be out of the picture. However, a freak accident in practice changed all of that.

In December 2020, Kazanecki’s season — and seemingly his career — ended early when he fell on a basketball and injured his left kneecap.

“The ball got knocked around in the paint and it landed under my foot,” he said.

He injured the kneecap and had surgery in January 2021. While rehabbing the knee and stopping by the gym during the ensuing months, he changed plans.

“You get in the gym with the guys and it feels like you have to do it,” he said of coming back.

Through 26 games this season, Kazanecki was averaging a team-high 17.8 points per game for the Fighting Bees. He was 30th in the country with 227 rebounds.

The 6-foot-6 forward/center could leave the school in the top 10 of a category that would surprise those who remember his high school days.

So far this season he is shooting 39.2 percent (65 of 166) from 3-point range, which would put him ninth on the Bees’ all-time list in that category. If he gets that percentage up a few ticks, he could land in program’s top 5.

He said taking 3-pointers is something he worked on during college to add another wrinkle to his game.

He’s had a memorable career at the school in Davenport, Iowa, schoo including winning the Chicagoland Collegiate Athletic Conference’s Dr. LeRoy Walker Champions of Character Award in 2018-19.

Kazanecki scored 17 point in the Bees’ 78-66 home win over Iowa Wesleyan on Feb. 10, which marked coach Ray Shovlain’s 700th career victory – all of them coming at St. Ambrose.

Seven was also a big number for former Marist hitter Jake McClain. The sophomore middle hitter took seven swings and connected on seven kills for a 1.000 hitting percentage. He also had seven blocks.

That comes less than a year after another former Marist middle hitter had an amazing perfect match. Patrick Mahoney had 12 kills in 12 attempts for Loras in a match last Feb. 23, becoming one of two players in NCAA history with a perfect match with that many attempts.

She did it in a recent 69-58 loss to Drury, a team that was voted fourth in the nation among Division II schools by the coaches.

The record was 1,914. Rhode entered the game tied for first and broke the record right away. He is also the school’s all-time assist leader.