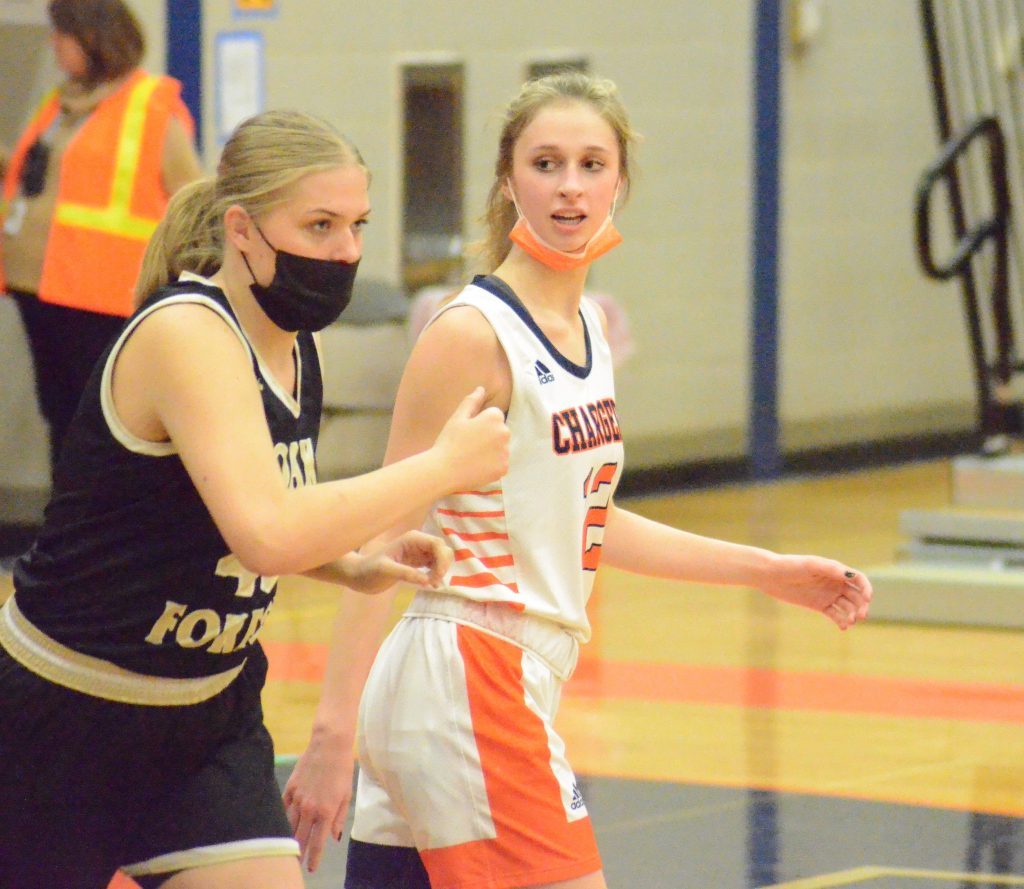 “I dreamt about it the night before it happened,” she said. “I literally dreamt about winning. I woke up and said, ‘I hope this is reality.’’’

The reality was that she scored 32 points on Feb. 3 in New Lenox in a 60-50 victory that avenged a loss to the Knights earlier this season. The win gave the Chargers a share of the SouthWest Suburban Conference Red championship – their first conference title since 2012-13.

Talk about a dream season.

Stagg finished the regular season 22-8, and Bakarat and Gail Korbitz each passed the 1,000-point mark for their careers. Korbitz, by the way, celebrated a birthday the night of the Knights triumph.

When these two were freshmen, the Chargers had a 23-8 record.

But a ton of senior talent graduated, and the Chargers went 13-18 and 5-9 before recharging with this big season. 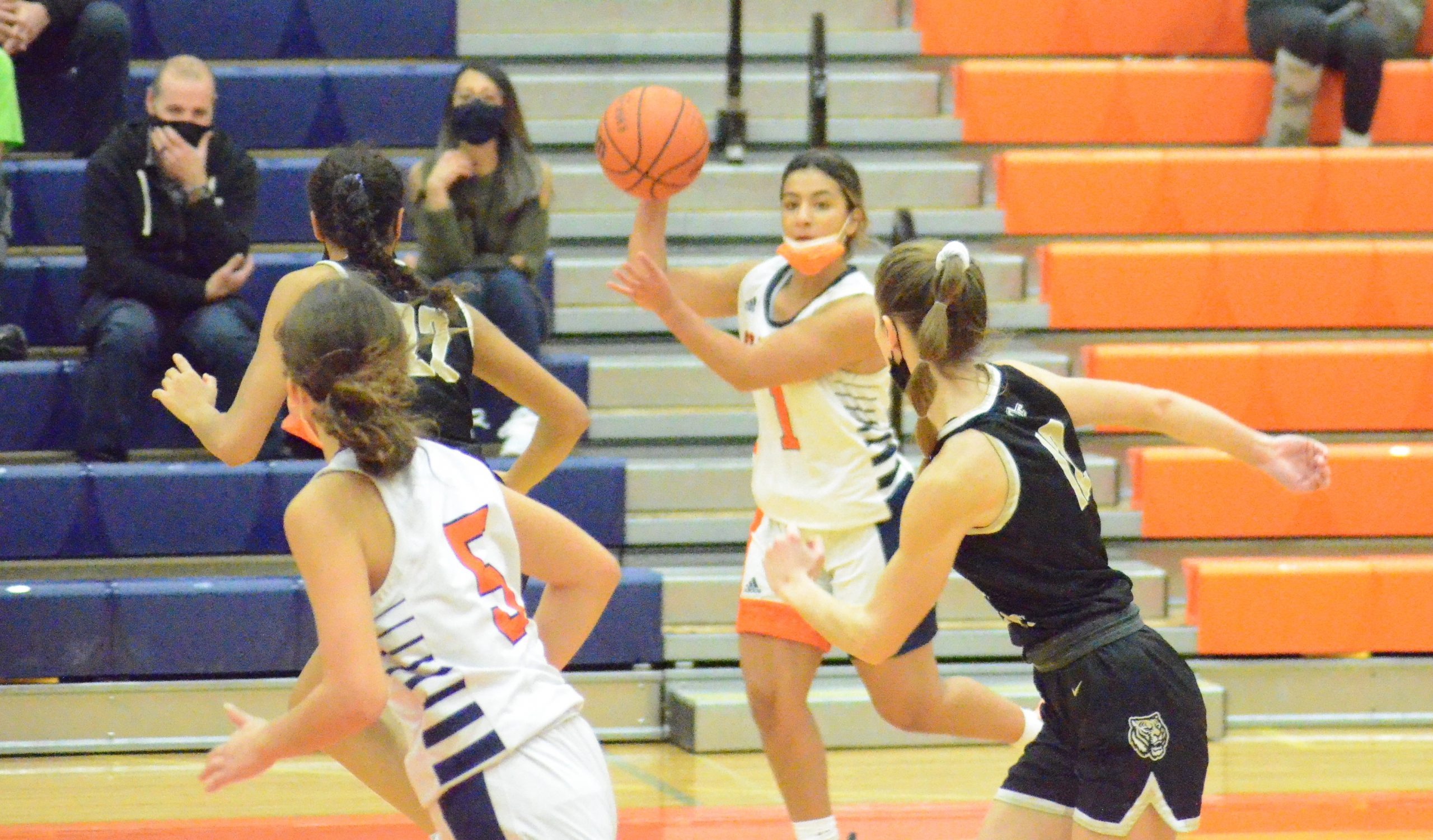 Laila Bakarat of Stagg looks for an open teammate against Oak Forest to close the regular season on Feb. 9. Photo by Jeff Vorva

The Chargers capped off the season with a 66-27 non-conference victory over Oak Forest heading into the postseason. Laila Bakarat had 22 points, Korbitz 16 and Sanchez 12.

Coach Bill Turner was hoping for a payoff this year after a couple of tough seasons.

“Seeing them come along, we were hoping things would work out the way they did,” Turner said. “It’s been a great season for us.”

Turner has a lot to like about this season’s squad.

“I like that they were a real close group,” he said. “They always, no matter what, cheered for each other. It was not about individuals, it was certainly a team effort amongst all 12 of them.

“And I like that they had a lot of fun. Sometimes they had a little bit of too much fun in practice, but when it came time to work, they worked. They put in the time and the effort, and the result is a really successful season for them.”

“Fun” was the key word when Korbitz talked about the Chargers.

“It was fun,” she said. “Winning is fun, practice is fun. It’s the perfect situation. Our girls are amazing.” 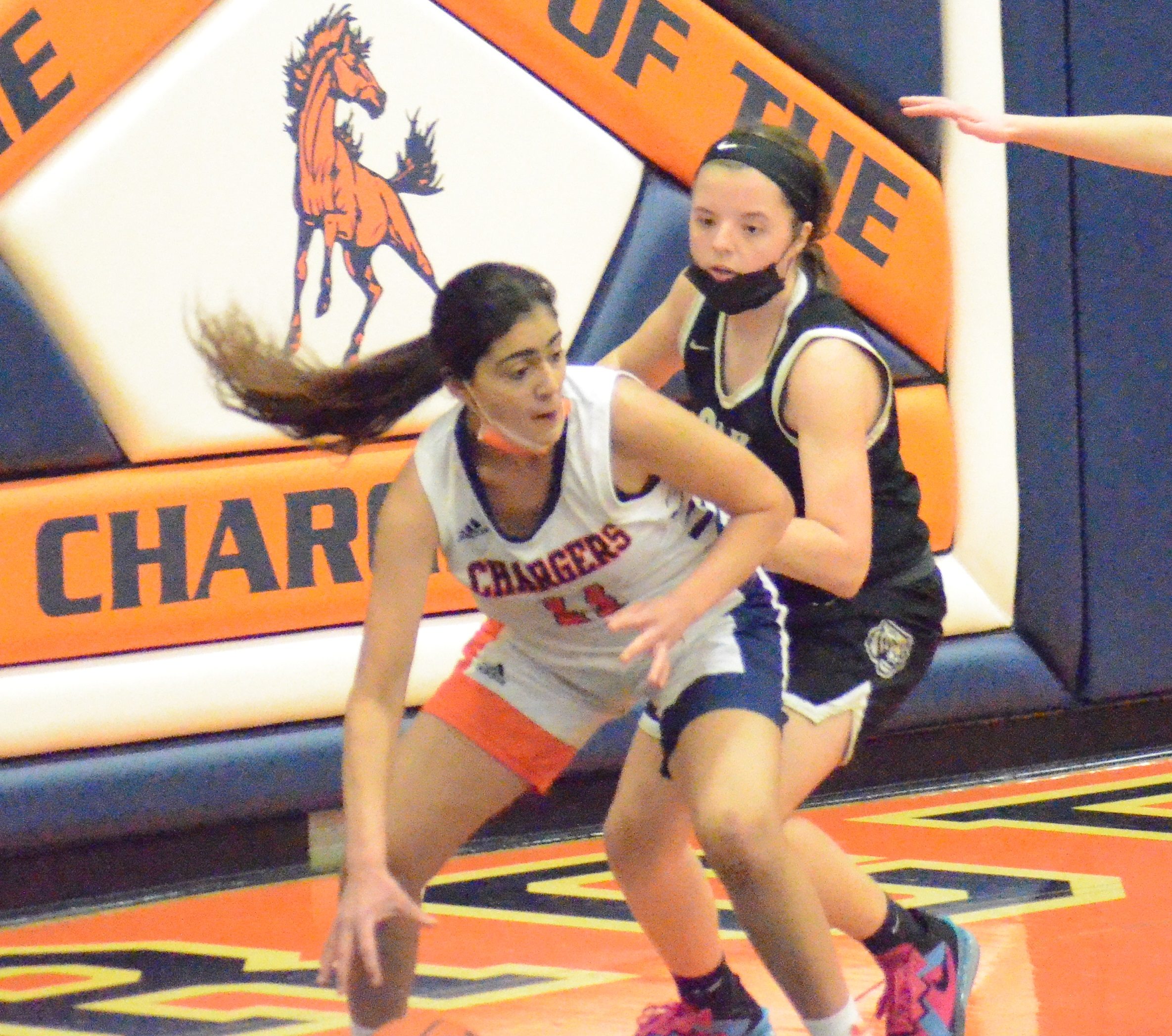 Stagg’s Heba Rasid tries to get the inside track against Oak Forest on Feb. 9. Photo by Jeff Vorva

While Stagg’s girls team enjoyed a great regular season, the boys have had their ups and downs, but came up with two huge SWSC Red on Feb. 8 and Feb. 10.

The first was a 55-35 victory over Andrew in Palos Hills, which represented a mammoth turnaround from a 55-32 loss Jan. 21 in Tinley Park in which they trailed 27-7 at one point.

Two days after the win over the Thunderbolts, the Chargers improved to 11-14 when they beat Lincoln-Way Central 42-39 at home after losing to the Knights 53-41 in New Lenox on Jan. 25.