Skip to content
February 14, 2022/Comments Off on Lyons man ‘accomplished something’ with Kilimanjaro climb 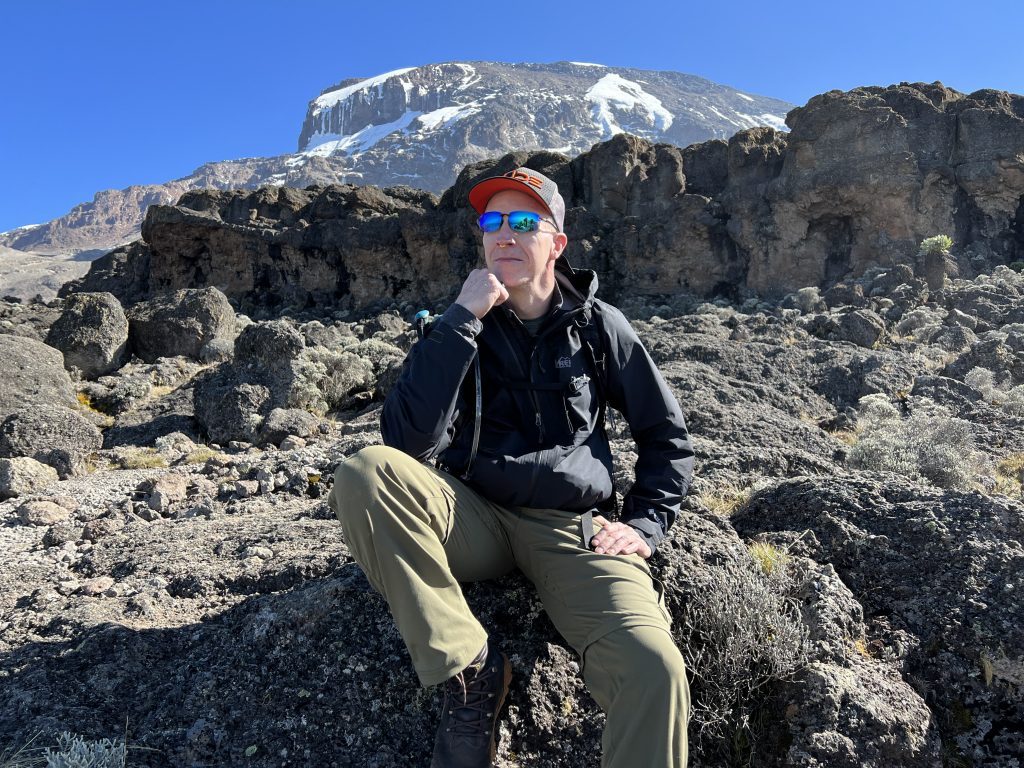 Stephan Alheim of Lyons learned a lot about himself while making the 19,341-foot climb to the top of Mount Kilimanjaro in Tanzania.

He learned preparation is important, especially when it comes to breathing properly. He also learned to have faith in the climbing guides. And he learned to always bring an extra layer.

“It was pretty cold the day we got to the crest,” he said, saying his water froze.

Alheim recounted his journey during a news conference Feb. 8 at the Lyons Village Hall.

It was put together by Mayor Christopher Getty, a client of Alheim, who is a fitness trainer.

Getty said he’d been often asked by many residents about Alheim’s climb and decided to offer him a chance to share his story.

And what a story it is.

Alheim and his nine fellow climbers began their ascent on Jan. 23, reaching the summit at 8 a.m. Jan. 27. They needed two days to descend the dormant volcano, the world’s tallest free-standing mountain.

“I never had a vacation where I came back and felt like I accomplished something. All vacations are great, but this one stood out for that reason,” Alheim, 47, said.

He learned of the climb in April 2021 from a business colleague. Being a trainer, he loves to test his body. This fit the bill.

“Summit Day was intense, 16 hours. We woke up at 11 p.m. (Jan. 26), we were all anxious. We started our ascent to the summit at midnight. The whole scene was so surreal, so beautiful.”

He was under-dressed for the 15-degree weather at the summit, “but once we got moving, everything was fine.”

“The trip down was the most taxing on my body,” he said. “All that downhill puts a toll on your body. My left knee, which had a patella tendon repaired, was fired up that day.”

Three of the 10 climbers did not finish the climb because of health troubles. One had a COVID-19 scare, and one had altitude sickness. The altitude did give Alheim headaches, he said, but he toughed it out.

A breathing instructor, he was glad he did breathing exercises for the higher elevations.

One reason he decided to climb was his late father, Pete, whose death in 2015 inspired him to leave his IT career and follow his dream of starting a fitness training business.

“On the mountain, when the going got tough, or it got colder, although I thought, ‘Wow, this really stinks,’ I said I want to do this for my dad, make him proud. The mind always gives up first,” he said.

The transition from the base of the mountain to the summit led them through four climate zones: Rain forest; heather, which is shrubbery and tall grass; alpine desert; and the Arctic summit at 16,000 feet and higher.

“It was just really beautiful,” he said. “I’m so happy I went. Great pictures. Great memories.”

Kilimanjaro is achievable for pretty much anyone if they train first and are willing “to put in the work.”

“The guides are so good. ‘Grab here, step here, move up.’ If you have the right training plan, preferably possibly mine, and you work on your strength, your mobility, your breathing, and you have good range of motion, I think Kilimanjaro is achievable for a lot of people.”

Alheim “stands as an inspiration to all those looking to accomplish a dream,” Getty said. “As a community, we are proud of him.”

Asked about being called an inspiration, Alheim said: “Everybody might have their own mountain. Maybe it’s something they’ve wanted to do. If they work at it …”

His work translated to 128,562 steps in seven days on the mountain.

“I went in overconfident. I went in thinking it would be easier,” he admitted. “So, Summit Day was harder than I thought, especially with a headache and my water freezing.”

“It made me respect the mountain when you get kicked a little bit.”

After Kilimanjaro, Alheim went on a safari in Tanzania, noting a cheetah jumped atop one of the vehicles. “We saw lions, elephants, giraffes. It was awesome.”

Would he attempt another climb?

“I would do it again,” Alheim said. “I kind of want to go back to Kilimanjaro and do a different route. Maybe a faster one.” 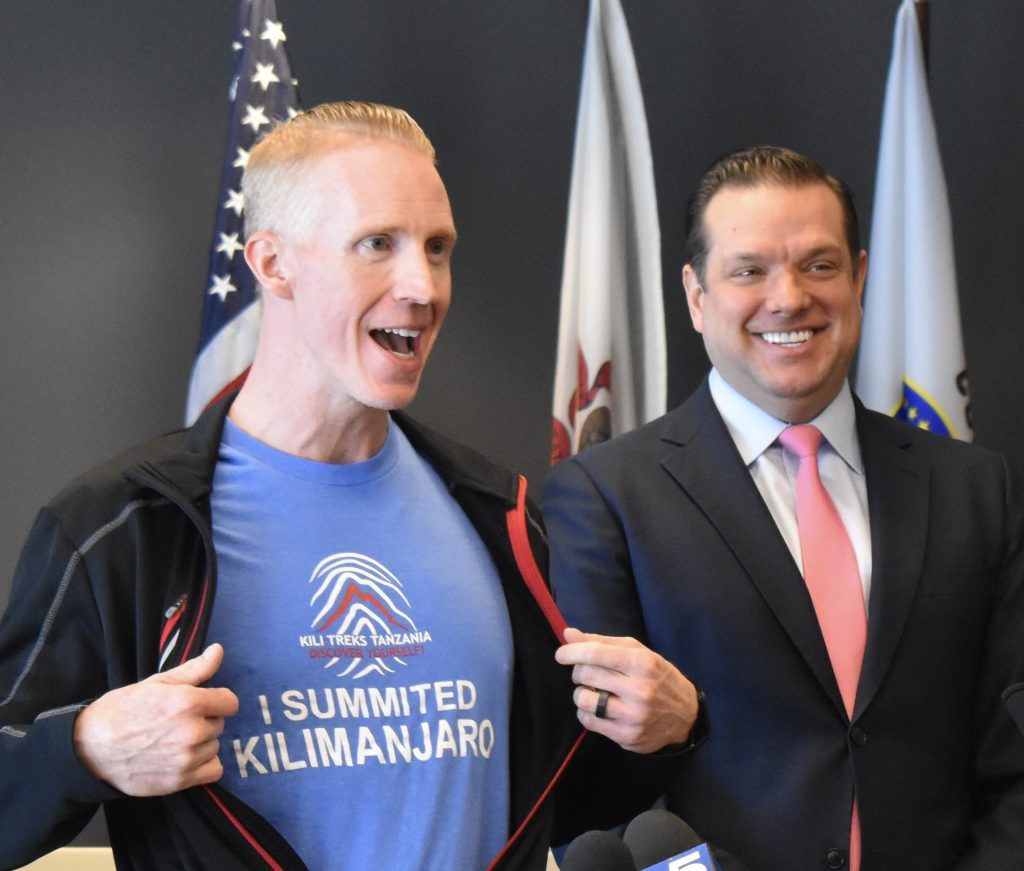 Stephan Alheim, of Lyons, shows off the T-shirt he received after climbing Mount Kilimanjaro in Africa. Mayor Christopher Getty is a client at his business, Trainer Alheim, in the village. (Photo by Steve Metsch)