February 15, 2022/Comments Off on Palos Park to allow Cog Hill to apply for video gaming 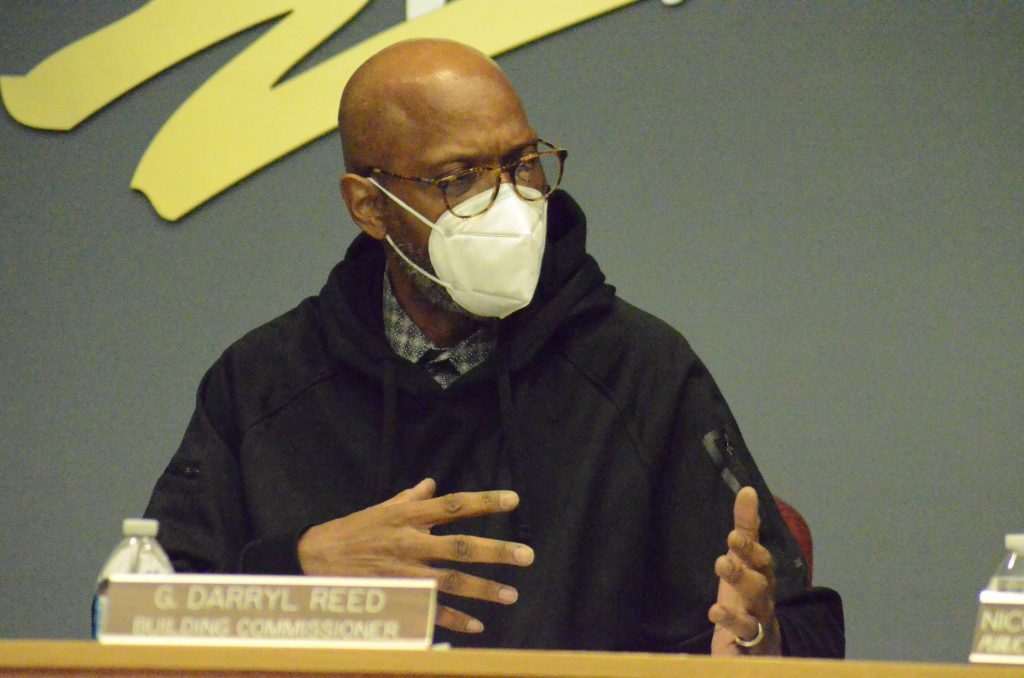 Palos Park Commissioner G. Darryl Reed cast the lone “no” vote Monday to allow a Class G liquor license business the chance to apply for a video gaming license in the village. (Photo by Jeff Vorva)

At 8:25 p.m. Monday night the long-awaited decision was made on video gaming in Palos Park.

After months of conversation and listening to businesses and the public, the village council voted 3-1 to allow the only Class G liquor license business in town – Cog Hill Golf and Country Club – to apply for a new liquor license that would include video gaming.

The handful of businesses with Class A liquor licenses, which thus far have not indicated they want machines in their establishments, can also apply for a new license and the council will open up the whole process again in changing the ordinance.

Council commissioners and Mayor John Mahoney said they listened to the public’s concern and have written several rules and regulations into the Class G proposal to help alleviate their fears.

Mahoney and commissioners Dan Polk and Nicole Milovich-Walters have been reluctant throughout this process, which started at the Oct. 25 meeting, but voted “yes.”

Commissioner G. Darryl Reed voted “no,” saying that he looked several neighbors and residents in the eye when asking them if they wanted gaming in the village and they told him they didn’t.

“From what the people have told me, I have to say ‘no’,” Reed said.

No one from the public attended this meeting and there was no reaction nor public comment. In the previous four meetings, eight people spoke against bringing video gaming to down and one spoke for it.

Mahoney, who in past meetings said he does not like gambling and had knots in his stomach over this issue, is glad the decision has been made and hopes that it satisfies all sides.

“Maybe, at some point, we will address Class A and maybe we won’t,” he said after the meeting. “We’ll see. This is one very small step. My preference is that I think I would like to learn from this before we do anything else.”

Polk, who has stated in past meetings that he does not frequent establishments that have video gaming but feels this move is good for the village, assured residents that they are not just handing out licenses – designated as Class GVG – easily.

“Once the entity jumps through the hoop of applying for the GVG license, they still have a review process that has to be met and approved in order to actually have customers have access to the video game,” he said. “There is an inspection process, there is a planning process – all of those pieces have to be fulfilled in order for them to actually have that activity in their particular establishment.

“There are different levels of checks and balances. They just don’t get their GVG license and it’s Katey bar the door. They have the privilege of re-submitting plans for whatever [a video game room] is going to look like. It’s not a one-and-done process.”

The council also changed a part of the amendment that allows the council itself to approve site plans where previously it was written that was in the hands of the village manager.

Milovich-Walters has consistently been vigilant about addressing her concerns for keeping the visual and audio aspects of the gaming rooms away from the public. She said Monday that this could work.

“I went to a friend’s breakfast restaurant, and we were talking, and she said they have video gaming at the restaurant,” she said. “I’ve been there several times and had absolutely no clue that it was there. At this point, we are talking about the only golf course in town being able to maybe use this ordinance to their benefit.”

Reed said he appreciated the rest of the council’s transparency throughout the months leading up to the vote but questioned the reasons for doing this and went with what the public told him before casting his “no” vote.

“We need an overall global statement on what the heck we are doing,” Reed said. “That’s all I’m asking. We need to be telling people what we are going and why we are doing it.