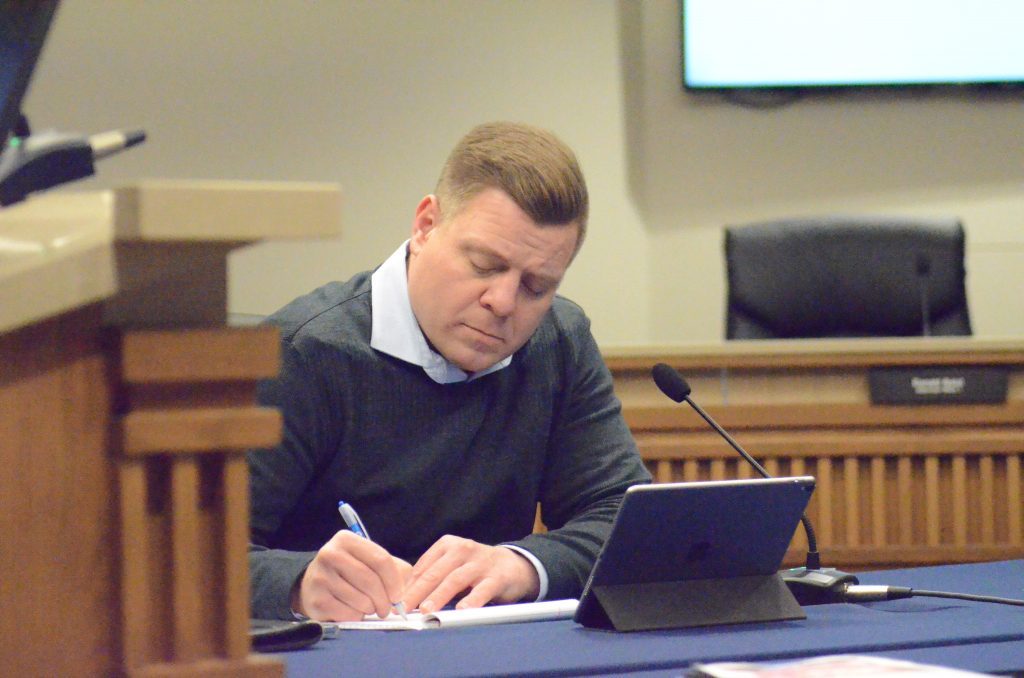 Palos Heights Alderman Brent Lewandowski announced Tuesday night that there will be a public hearing on March 7 to discuss video gaming. (Photo by Jeff Vorva)

Video gaming discussion is back in Palos Heights.

The Palos Heights City Council’s License, Permits and Franchises Committee will hold a public hearing at 7 p.m. on March 7 at the Orchard Room of the Palos Heights Recreation Center.

Members of the committee, headed up by Alderman Brent Lewandowski, will talk about ideas for limited gambling while taking the temperature of the residents about this controversial issue, which was defeated in a 2018 referendum, 3,319-2,522.

“It’s imperative to seek as much community input as possible on this issue,” Lewandowski said during Tuesday’s council meeting. “The first step is to hold this public hearing.”

He said for those who cannot attend and still want their opinion heard they should contact him at [email protected].

After the meeting, Lewandowski said he was not sure how the public hearing was going to go, but he was prepared for anything.

“Maybe there will be a whole bunch of silence,” he said. “Maybe it will be full of people with torches and pitchforks and we would say ‘forget it.’

“The whole thing is this – you can’t be afraid to discuss things, especially with a change in the environment. Alderman [Jerry] McGovern did a lot of work on this, and a lot of background and he knows all the stats on all the neighboring communities. It’s important to have the discussion. That’s as far as we’re at right now and we’ll see where that goes from there.”

McGovern brought this issue up in December 2020, to help some of the businesses in town recover money lost because of COVID-19 shutdowns.

He noted that other surrounding communities have video gaming and on Monday, Palos Park voted to allow Cog Hill Country Club and Golf Course to apply for a license that would feature video gaming.

“That makes us a deserted island out here,” McGovern said. “We’re the last of the Mohicans.”

McGovern said that since the referendum setback, the state has updated its gambling laws and soon betting at all of the professional sports venues in Chicago will be commonplace.

There are 17 Class A (bars and restaurants) liquor license owners in Palos Heights and one Class F (golf course) license.

Lewandowski and McGovern both said that they don’t want advertising of the machines and for them not to be visible in the businesses.

After the public hearing, the committee will hold a meeting on March 8. If the committee feels the need to bring it to the board, it would probably happen in April or May.

State of the City announced

Palos Heights Mayor Bob Straz announced that his State of the City Address will take place at noon March 22 at the Orchard Room of the Palos Heights Recreation Center.