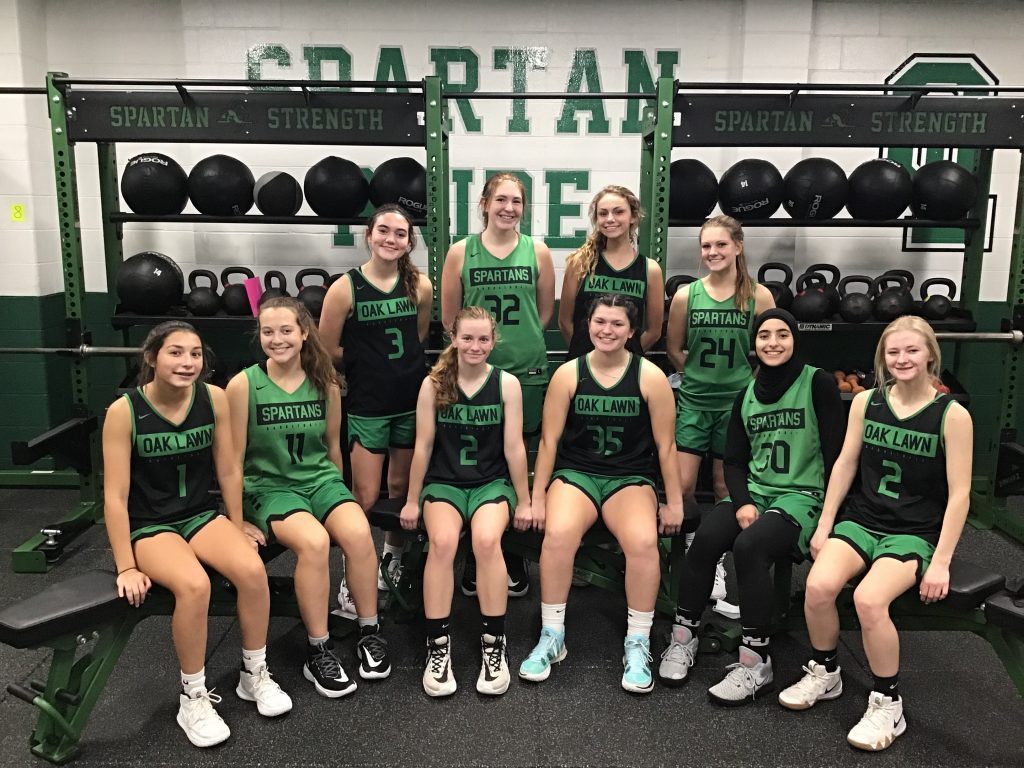 Trying to win a conference championship in any sport requires the ability to overcome obstacles that may get in the way.

Last year, it was the uncertainty and oddity of dealing with a global pandemic that presented challenges for the Oak Lawn Community High School girls basketball team. However, the Spartans captured the South Suburban Conference Red crown with determination and focus, going 12-1.

This year, the Spartans faced a reality of graduating most of its starting lineup from that team from a year ago and inserting three freshmen into the starting lineup. Head coach Mark Sevedge found a way to develop this young talent and blend it with established upperclassmen like Mia Kennelly, Kate Dillon, and Rose Savaglio to do it yet again.

Last Friday night, Oak Lawn defeated Eisenhower to secure its second conference championship in two years, and it did so with a perfect conference record.

To make it even more special, the girls conference title came on the heels of the boys basketball team winning its first conference championship since 1983. For the first time in school history, both the boys and girls basketball teams at Oak Lawn are conference champions in the same year. The two teams ceremoniously cut down the nets at the Paint the Gym Purple Night to put an exclamation point on the accomplishment.

“The success we’ve had these past two seasons is strictly the result of the dedication to improve that our players show in the offseason,” Sevedge said. “The girls decided to work hard when nobody was watching–when the gym was empty; they committed to being in the weight room when others were at the pool. The SSC is improving each year, so if we decided to just do the minimum, these two championships wouldn’t be ours. We had to earn them.”

The Spartans (6th seed) advanced to the Kenwood Regional Final with a convincing 76-24 win over Chicago’s Juarez High School Tuesday night. They will play Kenwood tonight at 7 p.m. for the Regional title in a game that was pushed back a day because of Thursday’s snow storm.

The Spartans (21-6 overall) put the cherry on top of the conference championship last Tuesday night with a comeback win over Oak Forest for a perfect conference season at 13-0. After trailing by 18 points at halftime, Oak Lawn turned up the defense on junior standout Jenae Kent, who scored 21 of her game-high 30 points in the first half, with freshman Teagan Krzystof and prevailed 51-50.

The Spartans used a menacing defense and hot three-point shooting (13-for-26) to pull out the victory. Shatha Abdeljaber led the way by going 5 of 6 from behind the three-point arc. Dillon added yet another double-double with 17 points and 12 rebounds.

The past two seasons have been remarkable for the Spartans. They have won 25 of 26 conference games during that stretch and have not lost a home game since February of 2020. The team has outscored its opponents by 648 points in the last two seasons, which is an average margin of victory of 24.9 points per game. In 2021, the Spartans hit 81 three pointers, and this season that number jumped to 105. The total number of points scored in 2021 was 714 and this season that was elevated to 737.

“Other than the jump in three pointers made, most of our statistics are eerily similar between the two years,” Sevedge said. “There was just a slight increase, which is probably why we were able to avenge our one conference loss from last year. It’s pretty wild to look at it all.”

In addition to both the varsity boys and girls basketball teams winning conference this year, the girls junior varsity team also won the SSC Red. They were 17-7 overall and 11-2 in conference. Head JV coach Shawn Neubauer got the most out of his young team filled with two sophomores and the rest all freshmen. And all three levels (freshmen, JV, varsity) at Oak Lawn swept the SSC Red side of the conference schedule this season. The future certainly looks bright for Oak Lawn girls hoops.