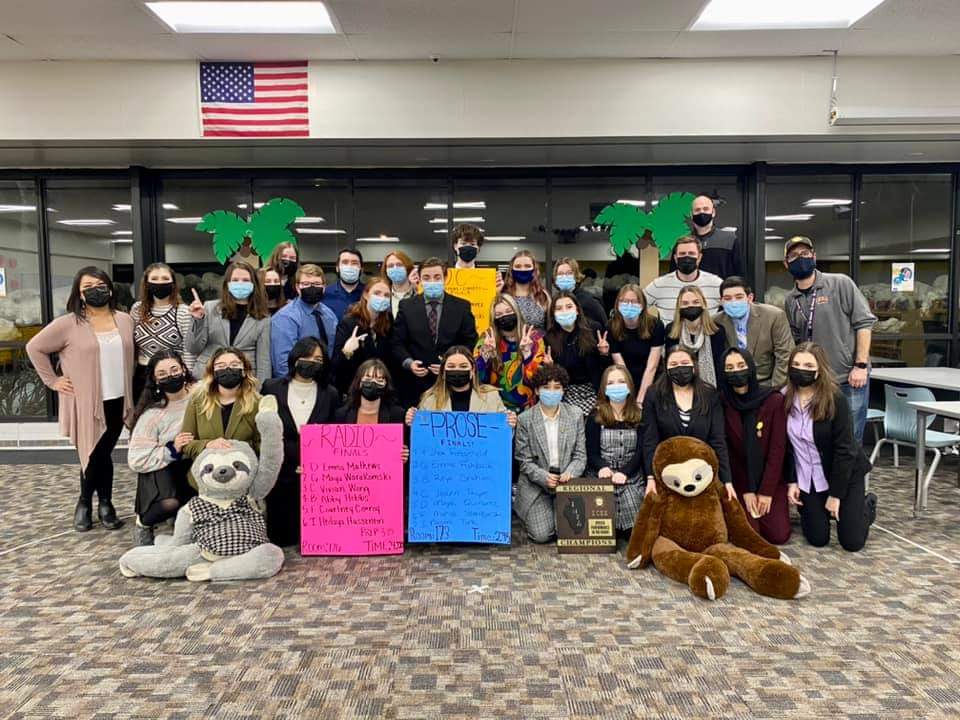 For the 15th season in a row, the school, 10601 Central Ave., Oak Lawn, had at least one speech team member advance to state.

“One of my most important responsibilities as coach of this program is to continue the tradition of success established by those before me,” Connor Reynolds, Head Speech Coach at Richards, said. “Every time we qualify, we’re just continuing what former head coach, and current assistant coach, Michael Badger started more than 15 years ago.”

Reynolds has been coaching speech for six years at the high school, three years spent as an assistant coach for three years, and the last three years as head coach. The team practices every day, functioning just as a high school sport, and competes anywhere from 10-12 Saturdays between October and February.

“There are a wide variety of benefits to being a part of the speech team,” Reynolds said. “Being in this activity teaches you how to persevere in the face of a lot of obstacles: criticism, time management, unpredictable judges. Everyone who comes through this program is a stronger, more resilient person. Maybe more importantly, speech is essentially about communication. The fundamental skill we’re working on is the ability to convey the message, emotion, or thought to another person, or audience. And I think there is great value in helping students become more capable in these abilities.”

The school took third place at the Illinois Speech-Language-Hearing Association Regional on February 5. For the first time in program history, Richards’ students in all 15 competitive events advanced to the sectional tournament the following weekend.

It was during the sectional tournament when Richards’ junior, Abeer Obadi, became the Sectional Champion in Impromptu Speaking.

“I’ve always been an introvert growing up and sometimes I felt as if I wasn’t able to voice my opinions and express my personality to others,” Obadi, 17, of Oak Lawn, said. “So, when I started my high school career, I looked into things that would force me to step out of my own comfort zone. I joined speech with a group of friends, and I made so many more along the way.”

Three years into the speech team, and Obadi has done just that.

“Being the Sectional Champion in Impromptu Speaking means everything,” Obadi said. “My three years of hard work is finally paying off. It’s honestly an indescribable feeling. All season I’ve been working towards going to state, and now that it’s actually happening is insane. It just proves how one can truly grow to love and appreciate something they were once terrified of.”

Obadi, who prefers Impromptu Speaking, which is where she is given two minutes to prepare a six-minute speech about a prompt she is given, spends about five to 10 hours practicing each week.

“I make sure to stay organized, and keep myself in a healthy mindset throughout the week,” Obadi said.

Dedicated students, like Obadi, are what help the speech team to be so successful year after year.

“I can say that Richards is pretty special,” Reynolds said. “It is this wonderful amalgamation of so many different people. You also can’t discount how well our school and district really support activities and athletics. Speech is an activity that does require a decent amount of time and resources, and without a supportive administration, we could not be where we are.”

The IHSA State Speech Tournament took place February 18-19 at the Peoria Civic Center in Peoria. There were over 50 schools competing over those two days. The State Series encompasses three levels of competition, that includes about 200 schools across the state.