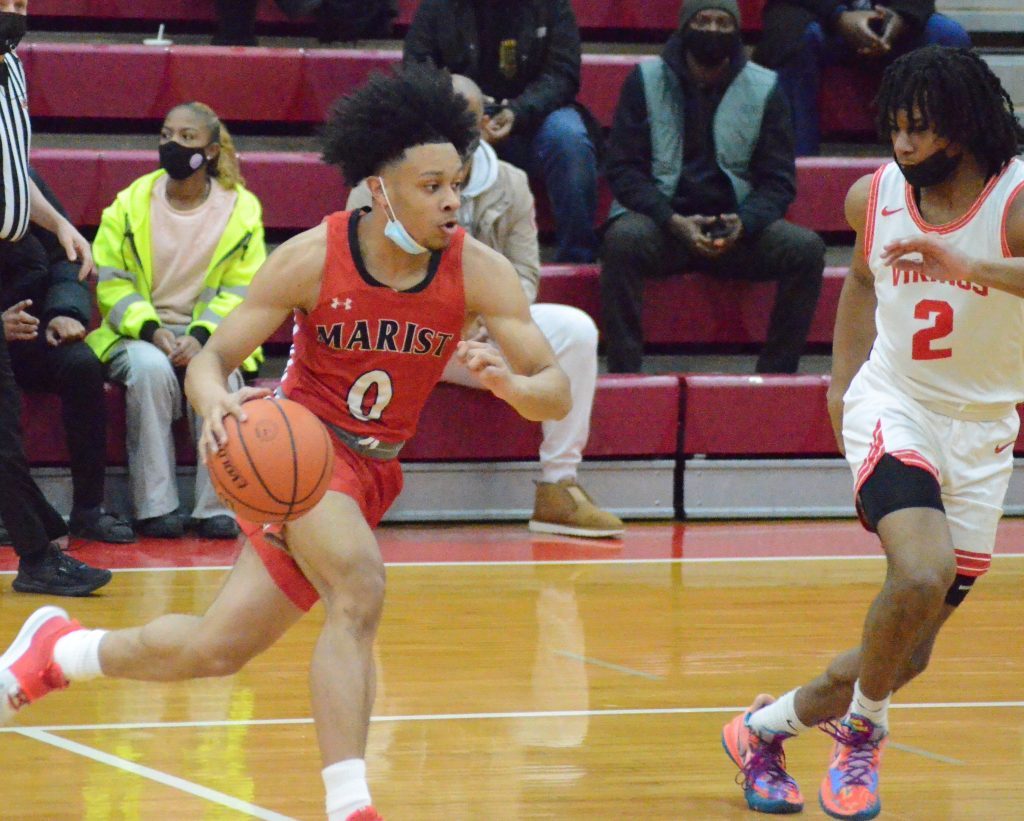 Marist’s James Murphy and his teammates made three comeback attempts but could not top Homewood-Flossmoor in a regional final on Friday. Photo by Jeff Vorva

Marist and St. Laurence were both a shot away from possibly joining them.

Marist, the 10th seed in the Class 4A Thornwood Sectional, had a potential game-tying 3-point shot in the closing seconds fall off the mark in a 58-53 heartbreaker to second-seeded Homewood-Flossmoor on Feb. 25 at the H-F Regional.

On the same night, eight-seeded St. Laurence also missed a late would-be game-winner, and the Vikings suffered a 43-41 setback to top-seeded Simeon in the Class 3A St. Laurence Regional.

Marist (13-14) kept digging a hole against H-F (21-7) and made three big comeback attempts before running out of gas.

Kaden White had 17 points and had a hot hand in keeping the RedHawks close. James Murphy and Sebastian Drag each added 11. Marist’s top scorer, Xavier Sulaiman, who averages 17 points per game, got into foul trouble early and finished with two points.

First-year coach Brian Hynes, who was a longtime assistant when Gene Nolan coached the RedHawks from 2000-2017, enjoyed his first year as the boss.

“I still think Gene is always going to pop up somewhere,” Hynes said. “Some nights I’ve said, ‘I hope he does.’ It’s definitely different sitting in this seat. There is probably a little more pressure than I realized what Gene was under.

“But I couldn’t say enough good things about this season. I just met these kids nine months ago and from where we were when I first met them until now is just amazing, and it’s all a tribute to the character of these kids.”

St. Laurence finished its season 9-24. The Vikings are among the younger teams in the area, and freshmen EJ Mosley, Jacob Rice, Khalil Jones and Zerrick Johnson all hit double figures scoring in a 70-65 win over Hinsdale South on Feb. 23 to reach the regional final, so the future appears to be bright in Burbank.

The Vikings had the ball with 20 seconds left against perennial power Simeon (25-5), and a 3-pointer at the buzzer fell short of being what could have been one of the biggest stunners in the state during regionals.

Here is a look at the regional champions.

Tavari Johnson popped in 26 points and Will Carroll had 10 as Lyons beat Proviso East, 88-71, at the Proviso East regional. It was the Lions 27th regional or district title, and second since 2011. The Lions took a 25-5 mark into sectional play.

St. Rita’s Kaiden Space is taking command in the postseason, scored 21 points in a 72-61 victory over Morgan Park to win the St. Rita Regional. It’s the eighth regional titles for the Mustangs (21-11) and fifth since 2014. 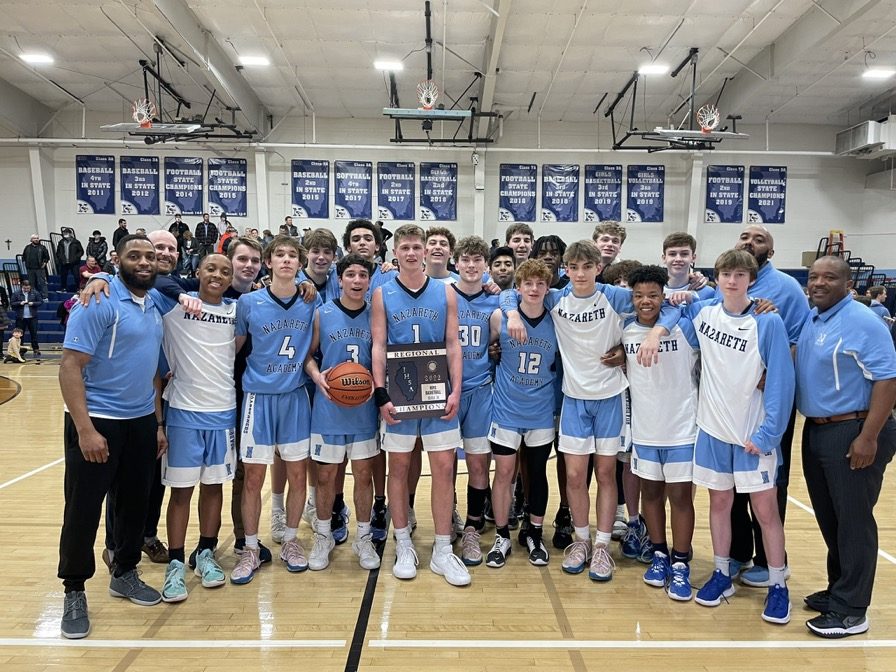 Nazareth celebrates its first regional title since 1991 after a comeback win over Lindblom. Photo courtesy of Nazareth Academy

Mount Carmel (28-4) had a strong defensive showing in a 70-36 title victory over Bogan at the Glenbard South Regional championship game. DeAndre Craig led the Caravan with 29 points.

Mount Carmel won its 16th regional title. The Caravan also tied a school record for victories with 28, equaling that of the Class AA state championship team in 1984-85.

Nazareth (19-13) overcame a 36-31 deficit to start the fourth quarter and won its own regional with a 47-44 triumph. Junior Anthony Cullotta had 19 points for the winners. It was the Roadrunners’ third regional title and first since 1991.

Riverside-Brookfield (23-5) topped Oak Park, 67-62, as Joe Gilhooley had 24 points and sophomore Will Gonzales chipped in with 14. It’s R-B’s 13th district or regional title and third straight title in the last three full seasons. 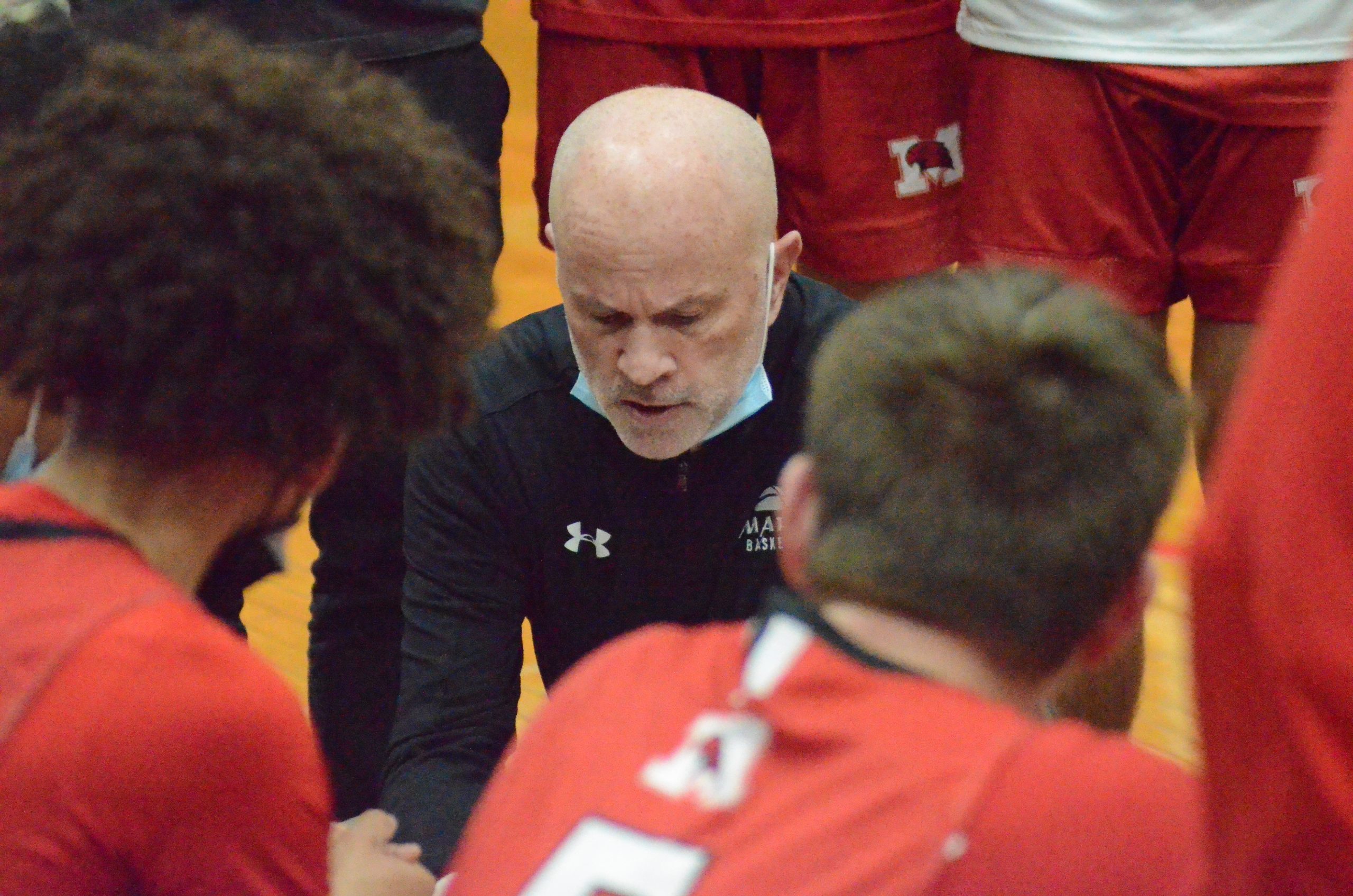