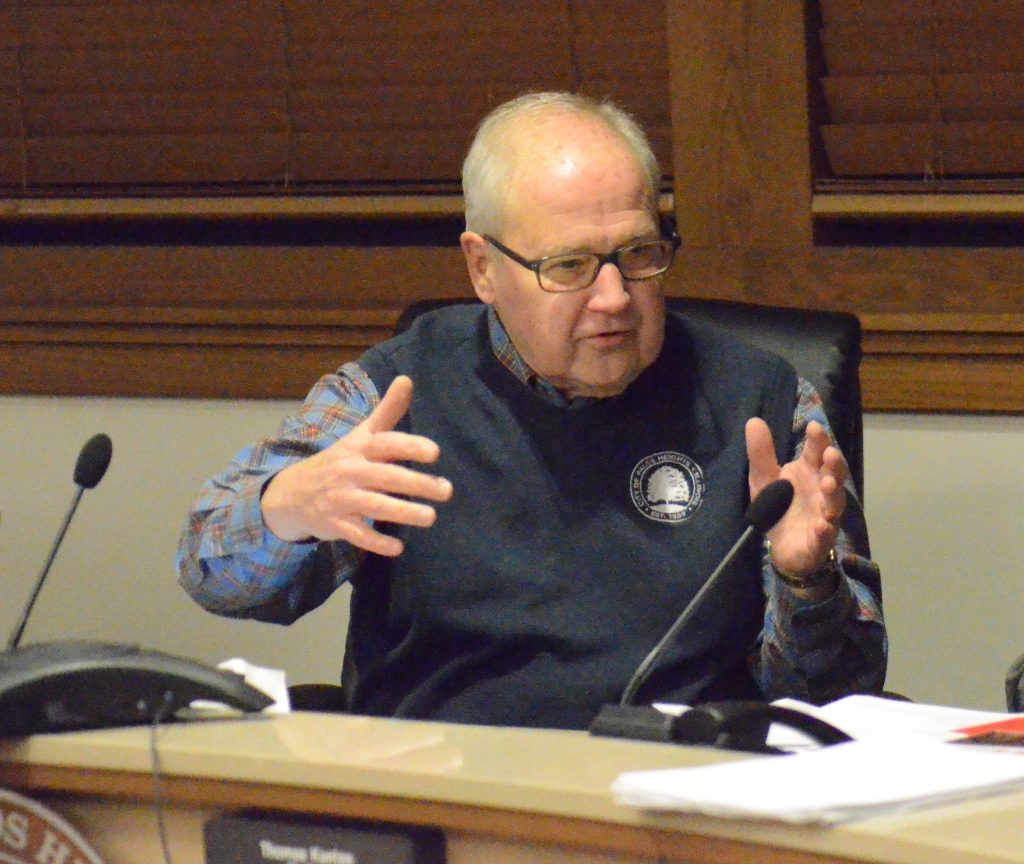 Palos Heights Mayor Bob Straz thanks residents from his community for getting through the toughest times of the pandemic at Tuesday’s meeting. (Photo by Jeff Vorva)

The Palos Heights City Council had plenty to do Tuesday night when it came to decisions and votes on city matters.

But it also took some time out to talk about world concerns.

On the day masks became optional indoors in Illinois – signifying a possible return to normal – the Russian/Ukraine war and high gas prices were discussed.

Mayor Bob Straz thanked the residents of Palos Heights for enduring the pandemic, which started in March 2020.

“It was hard for many people,” the mayor said. “It was hard on the residents and the shop owners, and I thank them for getting through this.

“I also want to take time to thank our employees during this time when we struggled and, in some cases, we were able to give services that people in our town have grown to enjoy.”

“They are looking for soft goods, whether it be bandages or diapers or wipes or things like that,” he said. “They will send it all to Ukraine.”

The war is also causing gas prices to skyrocket and that concerns the council, which would like to see state officials get the word out to national decision makers.

“It’s getting out of hand,” Alderman Michael McGrogan said. “Maybe they are not getting the message in Washington, D.C., how critical this is and how it’s going to impact everybody who has a car or needs heating or any other type of power source. It’s ridiculous.”

McGrogan showed concern for younger people who are in college and wondered how they would afford to drive to school.

Alderman Jack Clifford suggested that the politicians in Washington consider rolling back tax rates to pre-1990 levels to help people out.

A public hearing and discussion on video gaming takes place at 7 p.m. Monday at the Orchard Room of the Palos Heights Recreation Center, 6601 W. 127th St.

Alderman Brent Lewandowski said there is consideration for allowing businesses with liquor licenses and the golf course the option for hosting video gaming with restrictions on advertising.

Since this has been a hotly contested issue in the past, council members want to take the temperature of the community at this meeting.