Skip to content
March 3, 2022/Comments Off on How about giving small businesses a break?

How about giving small businesses a break?

Today I begin this column with an opinion.

All through the pandemic, our elected officials have made moves to provide economic relief to people hit hard by the harsh realities of life since March 2020.

Employers were given “payroll protection” funds that helped stave off layoffs that otherwise would have occurred.

People were given breaks on their water bills, heating bills, electricity bills and so forth. Renters unable to pay rent benefitted from an eviction moratorium. Landlords were compensated for lost rent.

Some tax deadlines were pushed back.

There were free COVID-19 tests, free vaccinations, even frequent mass-giveaways of food at sites across the city.

Seems like government at all levels did something to soften the blow—as is appropriate, in my opinion.

So how about softening the blow for businesses hit by an overly aggressive Lightfoot Administration for alleged violations of city mask mandates and so-called vaccine passports?

Aren’t times tough for independent businesses without City Hall bureaucrats making it worse? Now that the city has finally relaxed its mask mandates and vaccine passport regulations, how about an amnesty for businesses fined under those rules? Everyone else gets a break. Why not them? Perhaps our area’s three aldermen can exert their influence on this.

No charge for admission. Some of the items served will be fish, fries, coleslaw, soup, salad, bread and butter, pierogi, quesadillas, potato pancakes and more, including peanut butter and jelly for picky eaters. (Can you tell moms are playing a major role in this event?)

This event is dine-in, but carryouts are available.

After the event, all are welcome to walk to the church and participate in Stations of the Cross.

St. Daniel the Prophet School is hosting a football registration event from 5 to 6:30 p.m. Monday, March 7 in the school gym (the new building), 5337 S. Natoma. Kids entering fourth through eighth grade are welcome to sign up, as long as they are enrolled in a local Catholic school or enrolled in the Religious Education (CCD) Program at St. Dan’s.

The fee for the season is $275; $175 is due at registration to hold your spot on the team. The balance is due at equipment pickup in August. Practices will be held all through August, 4-5 days a week until school starts. Practices and games are at Valley Forge Park, 7001 W. 59th St.

The Wildcats play in the Southside Catholic Conference against teams from such schools as St. Mary Star of the Sea, St. Christina, St. Patricia, St. Linus and others—mostly from the Beverly area and the southwest suburbs.

The response was overwhelming from hundreds of people, young and old, in Clearing and Garfield Ridge. The outpouring of artistic talent was unprecedented, and Izzo succeeded beyond even his own expectations. 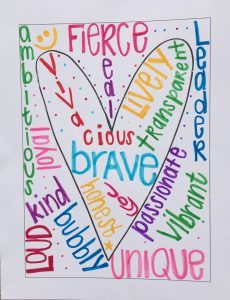 One of the hundreds of drawings that make up the Heart Project. –Supplied photo

But then, just weeks before the project was to be presented publicly at a March 2020 reception, the pandemic threw everything into neutral; but now that things are opening up again, so is Izzo’s project.

In the weeks ahead, I expect to hear more from Izzo, as well as Garfield Ridge resident Rob Bitunjac, head librarian at the Clearing Branch. I’ll share details as I receive them.